Published: May 31 2013 | Print | Email | Hits: 9013
Tweet
New Melle Sports and Recreation (formerly the New Melle Community Club) is celebrating its 60th Anniversary this year. The club was incorporated on January 12, 1953 but traces its roots back to the spring of 1948.

In a booklet published to promote the 1957 New Melle Festival, there are several historical essays that are believed to have been written by Myron Welge, though none of the articles specifically bear his name.  The article on the history of the New Melle Community Club states that early in the spring of 1948 the men of the community, under the leadership of Rev. E. J. Dierker of St. Paul’s Lutheran Church met at Paul and Welge’s Store [now Liz’s Bar and Grill] to form an organization to provide recreational facilities for the community. They chose the name “New Melle Recreational Association” and appointed officers: Rev. Dierker President, Edwin Paul Vice-President, L.M. McCormick Secretary and Leonard Fuerman Treasurer. They leased land adjoining the Lutheran Park (across Hwy. D from the  Lutheran Church) for a ball park and set out the secure the necessary funds to purchase equipment. 1 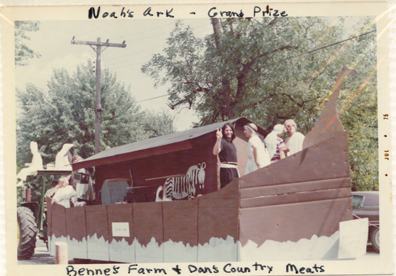 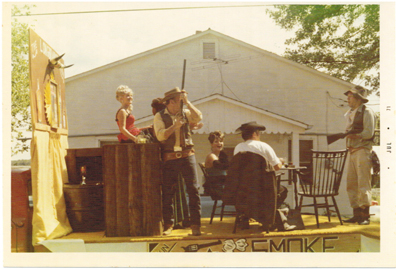 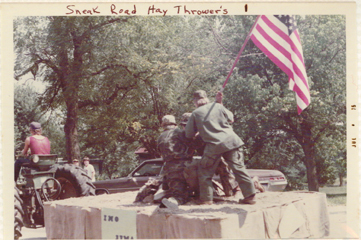 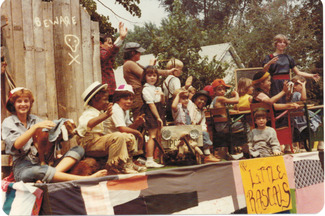 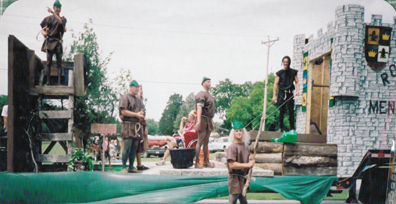 The front cover of the booklet contains the slogan, “Where Old Friend Meet and New Friends Greet.” (Bill Schiermeier, author of the Cracker Barrel books on local history and editor of “The Reporter” – a local newspaper sponsored by the New Melle Community Club from 1984 to 1994 – attributed that slogan to Myron Welge as well.)

In April 1952 a committee was appointed to proceed with the incorporation of the organization under the name of “New Melle Community Club.” Articles of Incorporation were signed by the officers (Linton M. McCormick-President, Lelan Paul-Vice President, Ophelia M. Dreibholz-Secretary, and Myron Welge-Treasurer) on August 22, 1952 and the Pro Forma Degree of Incorporation was signed by Judge B. Richards Creech in St. Charles County Court on January 12, 1953. 1 & 3

On June 24, 1953 the club voted to assume sponsorship of a fire department and started a campaign for funds with an $850 donation. (In 1954 a fire hall was built and a new 1953 engine was purchased-all financed by donations. The New Melle Volunteer Fire Department later incorporated independently on April 11, 1958.) 1 & 3

In 1955, through the efforts of the Planned Progress Program, the Community Club received a $500 award from the Missouri Edison Company (now Ameren UE) recognizing their work for the Fire Department and “their careful self-analysis of community needs.” [8] The money was designated to be spent on the second project of the Community Club, building an extension on the Fire Hall for housing the telephone system for the community. The building was leased to Lincoln Telephone Company for that purpose. 1 (Today that original fire hall building houses the telephone switching equipment for CenturyLink.)

In 1956 the Club sponsored their first two Khoury League teams; and laid water pipe from the Lutheran Church to the ball park across the road and built toilet facilities in the park. 1

In May, 1957 the Community Club entered the high bid for the purchase of the Old School House [now Seven Stones Wine Garden] to restore and make into a Community Center. That building was sold in 1966 and construction was begun on the existing banquet hall building at 4700 Hwy. Z. 1

The New Melle Community Club is also credited with donating land for the New Melle Water tower, financing the city’s street lights for several years, and persuading the State to improve New Melle’s streets and roads. 2

In December, 1988, Bill Schiermeier wrote an article about the club in “The Reporter”. His article included a time line of events and accomplishments of the club from 1953 to 1988. That timeline follows. (Editor’s Note: Unless footnoted or included in brackets [ ],the information below is from The Reporter, December, 1988. Source information was not included with that article.)

1953 – (Jan. 12) New Melle Community Club incorporated. 3
1953 – (June 24) Community Club voted to assume sponsorship of a fire department 1
1955-56 & 57 – Sponsored Planned Progress Program (A Missouri Edison Endeavor)
1958 – (April 11) New Melle Volunteer Fire District incorporated independently. 3
1958-1976 – Financed the town’s street lights
1961 – Purchased and renovated old school house for Club use. Sold in 1966.
1966 – Purchased 6.77 acres along Hwy. Z for new club site and new ball field.
1967 – Constructed present 50 x 100 Club building. Lights and backstop installed on ball field.
1968 – Built 20' addition to Club building.
1968 – Provided land to Water District for Deep well and water tower.
1969 – Built [new] entrance to club building.
1971 – Constructed Children’s playground.  [Upgraded in 1998.]
1972 – Built 24' x 32' refreshment stand with bathrooms.
1974 – Remodeled and enclosed entrance to club.
1975 – Built 42' x 80' pavilion adjoining refreshment stand.[Rebuilt in 2013.]
1977 – New Melle incorporated as a Village. Talks and meetings originated by and held at the Community Club.
1979 – Air conditioning installed.
1980 –Bathrooms and Kitchen remodeled.
1981 – Built second pavilion (30x60)
1981 – Provided use of the hall for the First New Melle Passion Play – a community tradition that continues today. 1 & 6
1982 – Built covered porch on back side of club building (24 x 100'). Installed electronic scoreboard and developed second ball field.
1984 – Community Club agreed to sponsor a small newspaper “to fulfill a news void since we are some distance away from the base of major newspapers.” Ads were sold to help defray the cost of printing. Copies were sold at various business for $.10 each, and subscriptions were available for $3.00 to $3.25 / year. The remaining cost was born by the club. The first issue was published in April, and monthly issues continued until February, 1994. 7
1984 – Cyclone fence erected around ball fields.
1986 – Became a “Missouri not-for-Profit” corporation and added “Inc.” to club name. 3
1987 – Built new storage building and improved spectator seating at ball field.
1988 – Installed additional cyclone fencing.
1988 – Built a new 54 x 70 building for horseshoe courts, the only covered courts in the St. Charles-Warren County Horseshoe League, and maybe the only covered courts in Missouri at that time.
1988 – (June 16) Hosted the official signing of the Melle-New Melle Sister City Partnership. Forty-seven guests from Melle, Germany and members of the community celebrated with a Country-Western Extravaganza.1 & 6
1990 – Hosted Missouri State Horseshoe Tournament for the first time on Labor Day weekend – compelling the construction of additional covered courts . Over 400 pitchers participated. Other state tournaments followed in 1991, 1992,1994, 1996 and 2000. 4
1992 – (Nov. 11) Installed the Friendship Stone, a 6000 pound  Ice Age era granite boulder given to New Melle by the by the City of Melle, Germany. 5
1992-1993 – Remodeled the inside of the Community club, adding the drop ceiling, removing some of the dark paneling and adding wallpaper. 5
1994 – Added an addition onto the horseshoe building. 5
1994 – (May 14) Hosted a dedication ceremony for the Friendship Stone that included a delegation of visitors from Melle, Germany. 1 & 5
1995 – Moved the Festival date from late July to late June.  5
1998 – Built block retaining wall in early 1998 then upgraded the playground — finishing the week of the festival. 5
2007 – (Sept. 4) Changed name and bylaws, becoming New Melle Sports and Recreation, and shifting the focus to athletics while still promoting charitable, educational, and civic work in the community. 3
2007 – (October) Purchased six adjacent acres for the construction of additional baseball fields and a football field. 5
2008 – (Feb. 16) Dedicated the converted horseshoe building as the New Activity Center, housing an indoor batting facility. 6
1999-2000: The second ball field was relocated and two new fields were added (one of which was the small T-ball field) bringing the total fields to four.  5
2013 – Added baseball Field 5, rebuilt the pavilion next to concession stand, put new roofs on all buildings and started construction of a football field. 5

Other information uncovered while researching club history included mention of a Fireman’s Appreciation fundraiser in 1985 which provided the purchase jackets and hats for the volunteer firemen; and mention that the Community Club sponsored children’s Halloween and Christmas parties for many years. 7

In addition, in May, 1986, Bill Schiermeier wrote, “The club has a ‘Good Neighbor’ program as a means of welcoming new members to the community…” (A booklet was published around that same time that contained information on the Village government, Community Club, VFW, Fire Dept., Daniel Boone PTO, Callaway 4-H Club and area churches. The 44 page booklet was supported by the sale of 43 half page ads from area businesses.)  In that May 1986 article, Schiermeier summarized the many types of activities held in the hall, including meetings for Lake Sherwood Estates and other organizations. He also wrote, “All of these events create a constant demand for improvements. Members, however, have always met the challenge, and they look now into the future for the opportunity to make major improvements to the present buildings…” 7

So many people have worked so hard for so many years (some families for multiple generations.)  I hope that everyone who has been involved over the years feels a sense of pride and accomplishment for their service to the organization, and I hope everyone in our community recognizes and appreciates the results of your efforts.

The local business community also deserves tremendous credit for their assistance and support of the development and maintenance of the club’s facilities. It would be impossible to put a value on the labor, equipment, materials, expertise and other resources that have been donated for various projects and improvements over years, not to mention team sponsorships, ball field advertising, and other contributions. The generosity of local (and some not so local) businesses made much of the growth and development of the club possible.

It’s obvious New Melle would not be the community it is today without the New Melle Community Club and the care, commitment, vision and determination of the people who have been involved in this organization over the past 60+ years.

I wasn’t born and raised here, but I’ve been around the area since the late 1970s and I have always appreciated the Community Club as a civic organization and a valuable community asset. It really is amazing and commendable when you realize everything that has been accomplished in this community because of this organization.

Congratulations New Melle Sports and Recreation! (Even though in the hearts of many you will always be “The Community Club!”) May you continue to be a vibrant, appreciated and contributing entity in this community for many generations to come!