Note: This story was originally published in the October, 2011 issue of the Boone Country Connection.

Fixing broken grave markers may not sound like an appealing pastime to some people, but it’s become a passion for Carl and Ida Gerdiman of Defiance – and serves an important purpose in preserving historical information.

Prior to the 1900s many cemetery markers were made of a sandstone or limestone mixture and fashioned in a tall, thin style about 2 inches thick, 15-20 inches wide and often 40 or more inches tall. Sandstone and limestone are not as durable as the granite typically used today, and over time, many of the markers crack and break, usually due to age and exposure to the elements, but sometimes from being bumped by lawnmowers or broken by vandals. Sometimes the stone remains in tact, but falls over.

Carl and Ida are charter members of the Boone Duden Historical Society (BDHS, which celebrated its 25th year in 2011) About 15 years ago, Carl, Ida and the BDHS initiated efforts to locate, preserve and maintain the many aging, and often abandoned, family and community cemeteries in southwestern St. Charles County and southwestern Warren County. Besides cleaning up brush, maintaining fences, and posting signs to identify the cemetery, with Carl’s help, many of the broken stones are also being restored.

Carl is a retired mechanic/machinist/tool designer with many talents. He spent most of his working career solving problems and figuring out how to fix or build new things. A coworker, Les Mades, often told him, “If they say it can’t be done, it probably can – you just need to figure out how.”  Those words challenged Carl to solve many problems in the workplace. They also spurred him to action several years ago when he approached a local monument company and asked them about repairing old cemetery markers. The monument workers told him, “Those old stones can’t be fixed.” But Carl thought otherwise and set out to prove them wrong.

Carl learned the process he uses to repair headstones mostly from trial and error. The first step in repairing a broken stone is to drill holes and place pins in the two broken pieces to hold them together. Carl created a jig that helps him align and center the holes to be drilled so the two pieces fit together correctly. Usually, he uses threaded, stainless steel rods for pins, but in some cases, a thicker, fiberglass rod is used when any original iron reinforcing rods have rusted and deteriorated. 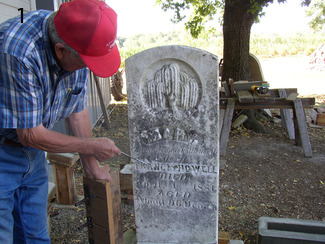 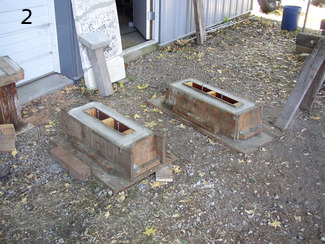 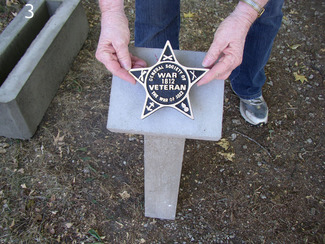 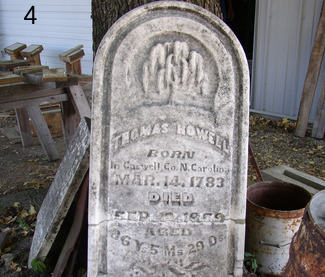 1.  Carl Gerdiman - working on Francis Howell's headstone which had broken in half.
2.  The forms Carl uses to make new foundations to support aging markers.
3.  The pedestal Carl designed to hold markers for Veterans of the War of 1812.
4.  The repaired headstone of Thomas Howell.

Then an epoxy is used to bond the pieces together. One of the challenges that developed was what to do when the crack went through the lettering on the stone.  The epoxy wanted to run and fill up the letters. After much trial and error, Carl discovered that he could use Playdough® to fill in the letters and “build a dam” so to speak, to control the epoxy. Once the epoxy dries, the Playdough® is easily removed. Then, whenever necessary, Carl uses a carbide bur tool to grind out and recarve the letters.

To hold the stones upright, Carl designed and built forms for concrete foundations. Many older stones fall because their concrete bases crack, often at the corners, and fall away. In his foundations, Carl uses reinforcing rods all the way around so if the concrete cracks in the future, it will stay in place and not fall away.

Grout is placed between the stone and the concrete foundation to hold the stone in place. The grout is similar to what is used for laying brick and concrete blocks. It consists of a mixture of Portland cement, hydrated lime and sand. It is softer and less acidic than regular concrete which could eventually eat away at the sandstone. The height of the foundation is adjustable depending on how far it needs to stick out of the ground. A height of 4-6 inches out of the ground helps protect the headstones from being hit by lawnmowers.

Currently, Carl is working on headstones from the Francis Howell Cemetery in the Busch Wildlife Area and the Thomas Howell Cemetery near the intersection of Routes 94 and D. Ida pointed out how much information is included on the stone. Thomas Howell’s stone reads: “Born in Caswell, County North Carolina March 14, 1783, Died Sept. 12, 1869; Age 26 years, 5 months, 29 days.”
In a related project, the BDHS has undertaken the task of locating and identifying the graves of Veterans from the War of 1812. The society is purchasing a star-shaped marker from the General Society of the War of 1812, and Carl has designed and builds concrete pedestal shaped bases to hold the markers.

Over the years, Carl has been asked to share his expertise with others. A few years ago, he was hired to restore damaged stones in the Emmanuel United Church of Christ Cemetery in Weldon Spring, Missouri. His work there became the subject of a feature article in the Current Times, a magazine published by Missouri Rural Electric Coops. After that article, Carl was contacted by several people who were interested and inspired to start restoring cemeteries in their own areas. One man called from Iowa, and Carl told him everything he could about the process over the phone. Another young man called from the Kansas City area. He had been a roofer but decided he wanted to do something else, so he had started a business restoring headstones. At the time he spoke with Carl, his company had grown to 10 employees who traveled all over the U.S. restoring headstones. Recently, a man from Warrenton called and wants Carl to teach him the process so he can work on cemeteries in Warren County.

Since the late 1990s, Carl estimates he has restored over 200 headstones. Each stone averages 8-10 hours of time (some take substantially longer), and material costs typically range $75 or more for the epoxy, reinforcing rods and cement. For those cemeteries maintained by the BDHS, the society pays for the materials and Carl donates his time. For other cemeteries, Carl has been hired to do the work. Until recently, Ida helped considerably, carrying and cleaning up tools and doing whatever other tasks she could. Currently, Carl is training a new volunteer, Jim Jackman, to assist with the BDHS restoration work.

For historical research purposes and family genealogy, grave markers are a vital source of information. With Carl’s help, historical facts that might otherwise be lost are being preserved for future generations.