St. Paul’s Lutheran Church in New Melle is celebrating its 175th Anniversary with a community celebration on Saturday, Sept. 14th, 2019. Part of the celebration will include historical displays and information related to the history of New Melle, which turns 180 years old this year. 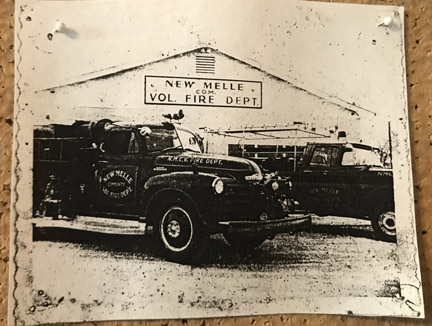 Do you know where this photo was taken and what business is in this building now?
Come and test your New Melle history knowledge Sept. 14th!

An assortment of wonderful attendance prizes will also be available to those who bring canned goods or make a cash donation to the St. Vincent de Paul Food Pantry in New Melle. (1 chance per can, or per dollar donated.) Attendance prizes include gift certificates to local businesses and gift baskets.

A number of local organizations and businesses are helping to sponsor and/or support this event, including Thiemann-Tidd VFW Post 5651-New Melle, Schneider Graphics, Rich and Lori West (Mayor of New Melle) and more.

Activities get underway at 11 a.m. and run through 3 p.m. If you have a classic tractor or quilt that you would like to display, please call 636-332-3050 so we can plan appropriately for space. Please plan to attend. See the enclosed flyer for more information.

New Melle’s first settlers worshipped together in their crude pioneer log homes. Occassionally, a roving preacher arrived on horseback to minister to them.
In 1844 the German Evangelical Lutheran Congregation of New Melle officially organized and bought 40 acres of land. In 1850, 20 of the 40 acres were set aside for a “Marketplatz” (later referred to as Market Square) in the center.

In 1847, Reverend Carl Herman Fick was officially installed on Trinity Sunday. Approximately 200 people were present for the ordination.

That same year the Missouri Synod was formed in Chicago. Reverend Fick and layman H. Welker attended the meeting, and St. Paul’s became one of only 12 churches to sign the historic charter.

A few short years later, the congregation split over of a controversial issue of Holy Ministry. A majority of members left and formed St. Peter’s congregation and barred the remaining members of St. Paul’s from the property. Those remaining members purchased 12 acres to the west (which is now the St. Paul cemetery) and built a new church. The new church was vandalized on Christmas Eve, 1852, and then burned down in January, 1853.

Donations poured in from Lutherans all over the country, and a new frame church was dedicated in November, 1855.

In 1858, St. Peter’s Congregation resolved to build a stone church, which was completed by Easter, 1860.

In 1869, the congregation voted to purchase a new Phfeffer organ, and it is the only Pfeffer organ that has been in continual use since 1870. *

The present office and pastoral study was erected as a school in 1919. The Lutheran school operated until the early 1960s.

In the 1940s a large recreational building was built primarily for the youth to play basketball. Various improvements followed including a kitchen remodel and restrooms in 1977, and other renovations in 1982.

In February 1983, the church and school were placed on the National Register of Historic Places.

The above information was compiled by Dianne Sudbrock from the St. Paul Lutheran Church 150th Anniversary booklet. 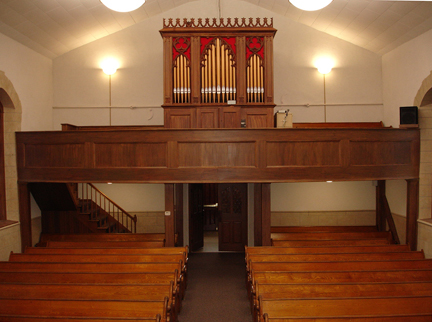 *  About the Pheffer organ:  John G. Pfeffer (1823-1910) apprenticed in building pipe organs and married in Sigmarigan, Germany. He came to this country in 1854, and established an organ factory in St. Louis in 1860. Of his nine children, two sons, Eugene and Robert, entered business with him. It is believed that Mr. Pfeffer placed nearly 600 organs in churches of various faiths, mostly Roman Catholic and Lutheran. Tragically, most of these organs have fallen prey to neglect, abuse and other damage. One, however, that remains in excellent condition is in St. Paul’s Lutheran church in New Melle. Two members of the Organ Historical Society, William E Repperger Jr., and Robert L Thomas, doing research on the Pfeffer Co., believe the 1870 New Melle organ to be the oldest Pfeffer organ in existence. It cost about $1200 in 1870. (Submitted by Barb Auping.) 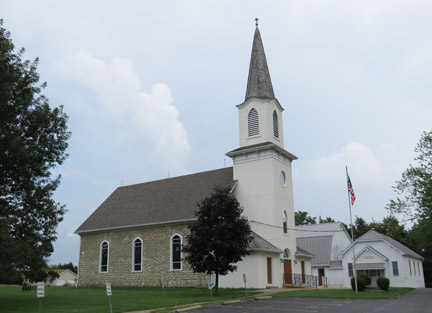