The Augusta Ramble music series is excited to present three musicians in a rare collaborative concert on Saturday, May 14 at 7 p.m. at The Harmonie-Verein at 5333 Hackman in Augusta, Missouri. Farshid, Weltman, & Black consists of guitarist Dave Black, guitarist Farshid Soltanshahi and harmonica and ukulele player Sandy Weltman.

Each of these musicians is talented to the point of brilliance - each is sought after throughout the St Louis music scene for their virtuosity and creativity.

DAVE BLACK -  Guitarist Dave Black has worked with many artists from various musical genres, including Jazz, Blues, Rock, Country, Bluegrass and Folk. He has partnered with multiple notables, including Richard 'Groove' Holmes, Bucky Pizzarelli, David Liebman, Fareed Haque, Little Anthony & The Imperials and The Drifters.  Dave also keeps himself busy working as a freelancer in the St. Louis area, performing and recording with many local artists.

SANDY WELTMAN -  A professional musician and educator. He is established as one of the leading pioneers on harmonica and appears on dozens of national recordings. Sandy’s musical skills allow him to cover an unusually wide range of musical genres, including jazz, blues, bluegrass, Celtic and Middle Eastern, on a wide variety of instruments, including ukulele, mandolin & banjo. Sandy has the ability to go deep and then deeper into the subtle colors of the music and surprises the audience with his musical sensitivity.

FARSHID SOLTANSHAHI - Through his travels, Farshid accumulates the music of the world, making it his own, weaving the variety of guitar styles together in a sound that is unique and familiar.  Farshid evokes textures, rhythms, colors and stories of diverse cultures on guitar and other exotic instruments.  Though Farshid is collaborating with Dave and Sandy for our concert, he usually performs with his band, Farshid Etniko—an ensemble that performs Latin, popular Jazz standards, as well as compositions that blend Middle Eastern and Flamenco influences with Latin beats and American blues sensibilities.

Enjoy this listening room-style concert at The Harmonie-Verein at Hackmann and Church Streets in Augusta, Missouri.  Admission is $10 and will be held indoors on Saturday, May 14th at 7 pm.  Snacks and drinks will be available for sale. Facebook event page link:  https://www.facebook.com/events/1293450774454178?ref=newsfeed. 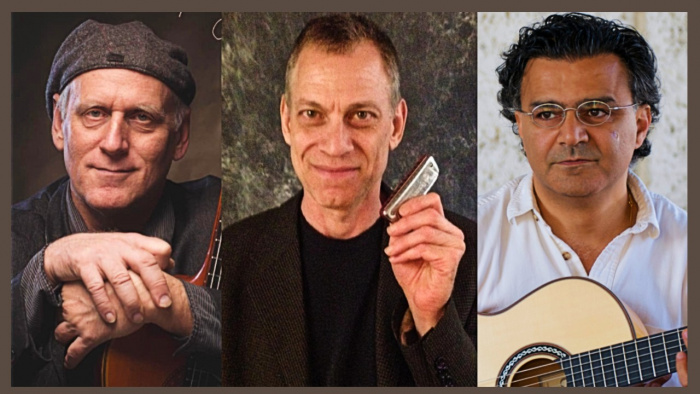