For more lawn and garden articles from MU Extension, go to extension.missouri.edu/LawnGardenNews.

COLUMBIA, Mo. – Bradford pear and its cousins may spread more than springtime beauty as these popular ornamental trees escape and become pests.

University of Missouri plant scientist Reid Smeda and graduate student Matt Terry study the movement of Bradford and other types of Callery pear from rural areas to the suburbs.

Cultivars of Callery pear include Bradford, Aristocrat, Whitehouse and Capital, among others.

It’s not known if escaped trees grow in every county in Missouri. “But it is a matter of when and not if,” Smeda says.

Individual Callery pear trees self-pollinate and produce few fruit with viable seeds. However, trees cross-pollinate when different cultivars grow within several hundred feet of each other. This produces many fruit with viable seed. Birds such as starlings eat the fruit and spread the seed through their droppings. Pastures, wooded areas and field edges in rural areas invite invasion.

Mechanical controls such as mowing or cutting plants at ground level worsen the problem because many stems can arise from root systems. Methods such as digging or pulling, as is done with shallow-rooted invasives such as bush honeysuckle, don’t work.

Terry recommends a foliar spray for trees up to 5 or 6 feet tall. Many herbicides that are effective on brush also appear to work on Callery pear. It may take 10-12 months to kill all growing points in the extensive root system.

Smeda and Terry tested several foliar, basal bark and cut-stump treatments in their study. “The take-home message is that we have plenty of options,” Terry says. However, preventing the establishment of new trees remains the best option. The larger the tree, the fewer effective options for control.

For more information on the Missouri Invasive Plant Task Force, go to http://moinvasives.org/.

Native to Asia, Callery pear is named after Joseph Callery, a 19th-century French missionary who sent samples to Europe. The trees owe their existence in the U.S. to fire blight, a disease that threatened the commercial pear industry during the 1920s. Because Callery pear resisted fire blight better than common pears, the U.S. Department of Agriculture transferred Callery pear germplasm to common pears in the 1920s.

In the 1950s, the Callery pear’s ornamental qualities led to the release of the first commercial variety, Bradford pear. This cultivar became popular with landscapers because it grew quickly in soil types common to the Midwest. It also resisted diseases and insects. Homeowners liked its natural dome shape, brilliant white spring blooms and colorful autumn leaves, Trinklein says.

One drawback, however, is its poor branch angle. This causes the soft-wooded trees to split during wind and ice storms. Breeders released cultivars with wider branches to combat splitting.

The groundwork for invasion was laid when new cultivars were planted in areas adjacent to Bradford pears. Cross-pollination of newer cultivars with Bradford led to trees bearing small fruit with viable seed. The fruit attracts birds, which spread the invasive seeds.

Because the plants originated in China, there were no natural enemies to keep them in check. What was an appreciated ornamental has become a self-spreading invasion, Trinklein says.

Unfortunately, the only way to stop the invasive spread is to cut down mature trees that produce seed and stop planting new Callery pears, Smeda says.

“Yes, that means cutting down Bradford pears and preventing the sale and planting of new Callery pears,” he says. “If the source of the seed is not stopped, we will continue to spread Callery pear into rural areas.” 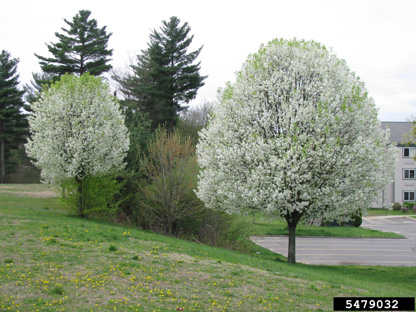