On Friday, Sept. 14, 2018, a group of 10 visitors will arrive from Melle, Germany representing the Melle Freunderskreis (Friendship) Group. The friendship program began in 1988 and will be celebrating its 30th Anniversary.

The photo  is the Emigrant Statue at Bremerhafen Harbor in Germany, where hundreds of thousands of Germans left for America in the 1800s. On several of the New Melle to Melle visits, tour members followed in the steps of their ancestors at the Emigrant Museum in Bremerhafen. There is a “New Melle Mayflower” list composed by Dr. Walter Kamphoefner where one can see many St. Charles County family names. Eleven families have been reconnected from our area, and some have stayed in family homes with their newfound relatives.

The statue at Bremerhafen Harbor depicts the emigrants’ departure with the woman looking back toward her homeland with sadness, and the young boy and father reaching out to a new life in America.

In the center of “Old” Melle, Germany, there is a statue of a mother and child holding a basket of flax. The flax represents the cottage industry in which women and children collected the flax and spun it into linen for extra household money. This cottage industry was lost with the invention of the automatic loom in the early 1800s, and contributed to the economic need and desire to seek a better life in America.

In New Melle, Missouri, on the grounds of the first cemetery at St. Paul’s Lutheran Church, stands the New Melle monument, “New Hopes, New Dreams, New Melle”. The top section of the mother and child are identical to the one in Melle, Germany, however they stand upon an open Bible with a sailing ship in front. The Bible represents their faith in sailing to a new country – surviving the dangers of crossing an ocean where one in six ships was lost at sea – and forging a new life in a completely foreign land.

While the delegation is here in September, they will donate a German Oak tree that will be planted near the New Melle monument in honor of the 30th Anniversary of the Sister City Partnership. A ceremony and reception is planned for Sunday, Sept. 16th, and the public is invited. Please mark the date on your calendar. The time and other details are to be announced. 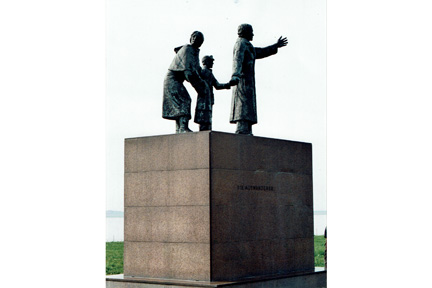 Emigrant Monument at Bremerhafen Harbor in Germany
where hundreds of thousands of Germans left for America. 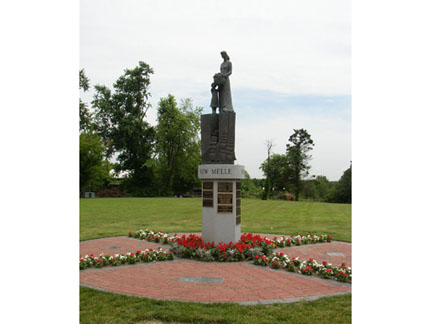