On Sunday, October 28, 2018, former teacher, Mabel (Freese) Busdieker, and several of the students she taught in 1948 at the Cappeln School – a one room school house located on Becker-Joerling Road – gathered for a 70th year reunion.

The gathering was held at the school house, which is now the home of Brent Haller and Tracey Schmidt. Seven students who still live in this area attended (along with a spouse or guest): Opal (Paul) Halcomb, Erwin (Ernie) Brakensiek, Hazel (Wildschuetz) Roever, Norbert Micke, Rose (Holtman) Fink, Wesley Brakensiek, Arlene (Paul) Orf, and Mabel – who is soon to be 91 years old! Mabel taught at the school for 3 years, from the fall of 1946 till the spring of 1949.

In the fall of 1946, Mabel had completed one year of college, and after passing the county teacher’s exam, she was given the challenge of teaching Grades 1-8 at the Cappeln School. She remembers, in addition to teaching a variety of subjects at various grade levels, for heat, often wood or coal needed to be dumped into the tall stove. Once, when opening the lid of the stove to fire it up, a bat flew out and needed to be escorted back to the outdoors.

For two of those years, the neighboring Doeblin School could not find a teacher, so Mabel was asked to pick those children up along the way and take them to Cappeln School in her car. She said, “So along Foristell Road to Oberhelman, Sneak, Hwy. T, D, etc. chugged the ’33 Plymouth with its precious cargo of 7 students and teacher. When the roads were icy my dad put chains on all four wheels so I could safely make the turns from Oberhelman to Sneak to T, etc.”

She described a typical day as: “All the students sang for the first 10 minutes while I played the piano. Then each grade would take turns, 10 minutes each, in small groups coming to the front for reading. Recess was 15 minutes. The next hour was English, Spelling, and Handwriting, again each grade had their turn. Noon recess was 1/2 hour, including lunch. In good weather they would eat lunch outdoors, either on the porch, ground or seesaw. I always tried to be where most of the students were. There was a swing and two seesaws outside. After noon recess, Geography, History, Science and Health were taught in short intervals for each grade. First grade might be only Health. Second through fourth grades, Geography; fifth and sixth, History; seventh and eighth grade would study Agriculture. Afternoon recess was at 2 p.m. The rest of the school day was arithmetic, using the chalkboard, workbook and homework assignments.

On the last day of school each year, there was a picnic and softball game for the students and families. A few times a year, there would be a program/play with singing, reciting, skits, etc. which the parents attended. Mabel brought “The Golden Book of Songs” that she used in the classroom to the reunion, along with programs from some of the skits/recitals, plus photos and other keepsakes that she had saved all these years.

Mabel gave Tracey Schmidt a wooden stick that her dad, Lavon, used in a school play as a child. Lavon played “The Grateful Goat” and the stick was used to lengthen his arms to represent front legs. Mabel found the stick in a closet at her house just a few weeks before the reunion!

This school house building was built about 1890. Brent Haller bought the property in 1987. He said he has always loved old buildings and the quality of craftsmanship with which they were built. At the time he bought it, the inside of the building was still just one big room. Brent kept the original wood plank floor, and holes where the desks were bolted to the floor can still be seen in the living room. He used the flagstones that once led to a log school house (circa 1845) for the base of the hearth. He hand-dug a small basement for the furnace and water heater, lifting the dirt out with bucket and pulley. He lowered the ceiling on the east side of the building, installed a beautiful stairway and built a master bedroom and bath upstairs. The renovations, done with help from his dad and several good friends, turned the school house into a cozy and comfortable home. Outside there is still a cistern and outhouses from days gone by.

Over 20 people attended the reunion, sharing a potluck lunch, a commemorative cake, and lots of memories and companionship.  Mabel’s daughter, Ruth Busdieker, who helped initiate and organize the reunion, said, “We’re so grateful to Brent and Tracey for opening their home for this, and for everyone who came. Mom really enjoyed it, and I’m so glad she was able to attend.” Mabel thanked everyone for coming. “It was so good to see them again and share memories of our times together.”

Brent and Tracey were happy to help out, “It was really cool to hear all their stories and memories and learn more about the history of this place.” 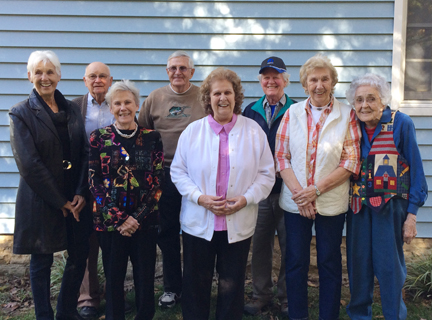 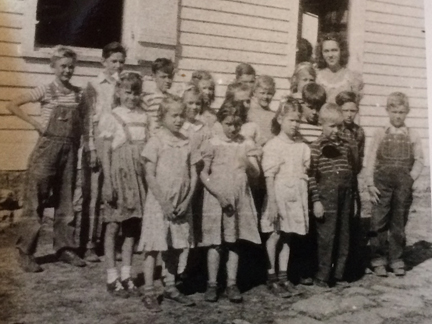 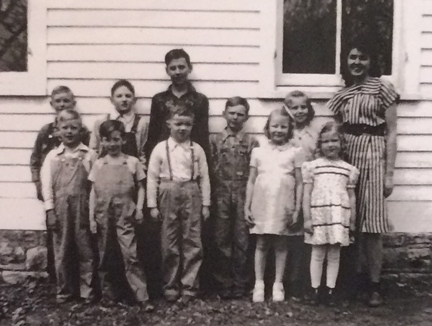 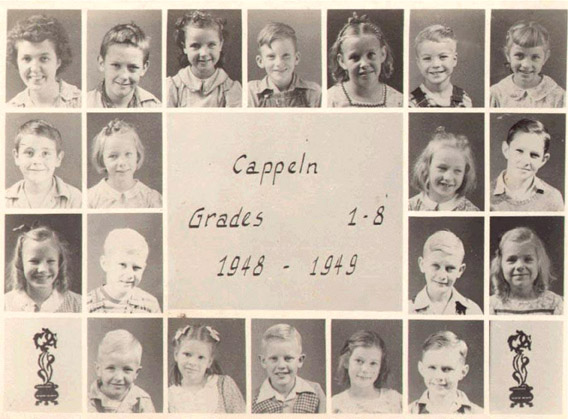 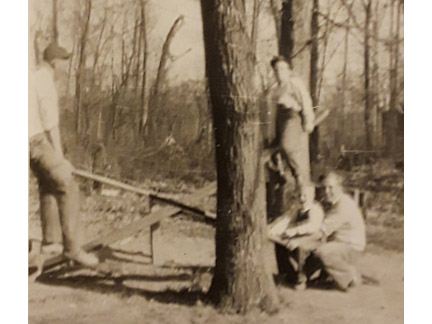 On the seesaws! Up–Schuester boys. Down–Bobby Schmidt and Roger Brandes. 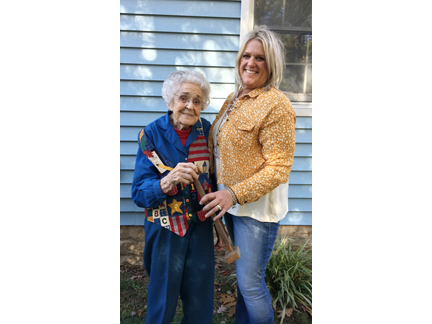 Mabel gave Tracey Schmidt a wooden stick that her dad, Lavon, used when he played
“The Grateful Goat” in a school play. Two sticks were used to lengthen his arms to represent front legs.
Mabel found one of the sticks in a closet just a few weeks before the reunion! 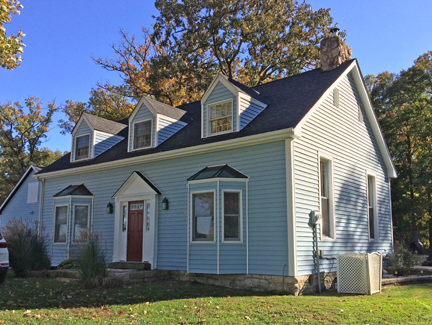 The schoolhouse as it appears today. 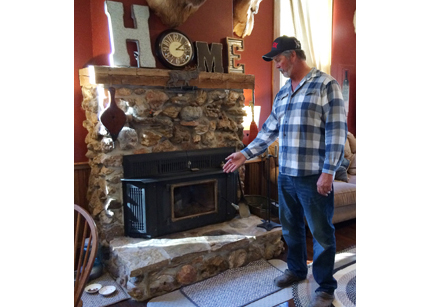 Brent Haller, explaining that he used the flagstones that once led to
a log cabin school on the property for the base of the hearth. 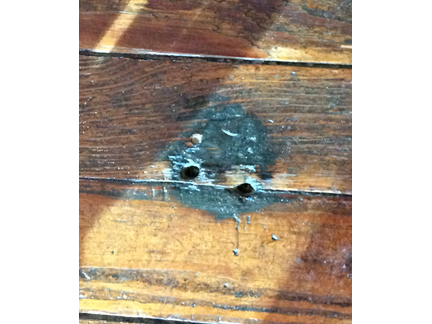 Holes where the desks were bolted to the floor. 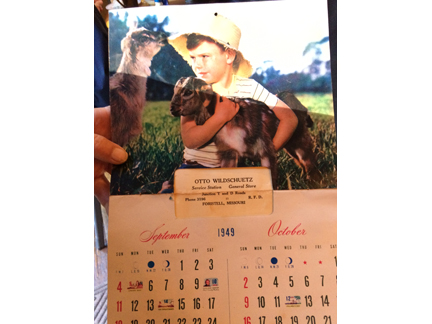 Otto Wildschuetz, who owned the Sinclair filling station at T&D,
was the clerk of Cappeln School District. Mabel would stop
by the filling station monthly and pick up her check.
This is an advertising calendar from his station from 1949. 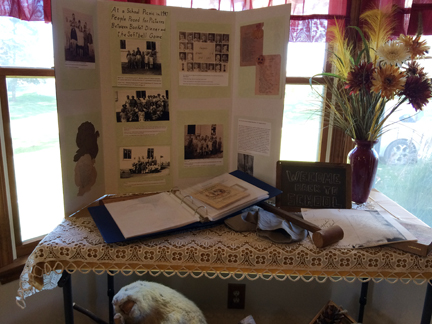 The display board and some of the other collectibles at the reunion.