Last year, Linda Richardson, who lives near Lake Sherwood in Glenstone Estates, got an idea to make a gift for a friend, Pat, whose son had died of Leukemia. Linda’s daughter, Tricia, had been making stuffed bears as keepsakes for friends and family since 2012.

When Pat’s son died, Linda thought, “I should make her a bear.” And she did. Then Pat wanted some more bears made for her daughter-in-law and other family members, so Linda made a few more, about 8 altogether.  Then, just a couple of months later, Pat’s husband died, so Linda made another batch of bears in memory of him.

Pat and her family were so thrilled, they showed the bears to some of their friends, who in turn ordered bears in memory of their loved ones. Orders started trickling in through word of mouth. Then in January of 2018, Linda and Tricia were featured in an article in Rural Missouri – a magazine published by the Association of Missouri Electric Cooperatives. Since that article was published, Linda and Tricia have made over 300 bears.

Tricia said, in the beginning, she made bears for children who’d lost their mother. “I’d read somewhere that when a child loses their mother, they are comforted by holding a piece of clothing and smelling her scent. Then, I made one for my 64-year-old pastor. I was able to incorporate a photo of him and his siblings when he was a child, and I made the bear with fabric from his mom’s skirt. When he saw the bear, he was overcome with memories and got tears in his eyes.”

Mary, a close friend of Linda’s, lost her son years ago when he was only 25 years old. Mary said she had kept one of her son’s shirts in a chest and would get it out from time to time. She’d hold the shirt and caress it, and it brought her comfort. Now she has a bear made from that shirt, and she keeps the bear and a photo of her son wearing the same shirt, on a table in her bedroom. Each morning Mary goes over and touches the bear on his heart as she leaves the room.

Linda said nearly every order brings a unique story, and they often hear back from people after they receive the bears. One lady had a bear made in memory of her husband, who had worked for QT. She sent them a jacket with the company logo, and Linda was able to incorporate the emblem onto the front of the bear, over his heart. The woman wrote back that she sleeps with the bear at night and puts it on her bed as a decoration during the day.

“That’s what got me started calling them ‘Comfort Bears,’” Linda said, “because a loved one’s shirt or other garment can be made into a bear that can be held or slept with. It brings people comfort.”

Linda said she usually includes a personal note to the family when she ships a bear. In one case, they made a bear for a young girl whose 100-year-old great-grandmother had passed. When the family opened the package and saw a note signed from “Linda and Tricia” they wrote back that they felt like they had “Heard from Heaven” that morning. The young girl’s maternal grandmother was named “Linda” and her biological mother had been named Patricia and went by “Tricia.” They said “Great-Grandma Evelyn was smiling in Heaven today!”

Tricia said one of the stories that touched her the most was a request from a woman whose son had died in prison. The woman said her son had been at the wrong place at the wrong time. He had no previous record, but they could not afford a good attorney. He went to prison, and while there he got sick and died. Tricia said, “She sent the neatest picture of her son and his daughter looking at each other, but the only clothing she had from him was a prison issued T-shirt and gym shorts. She ordered one bear, but we were so touched, we made a second, smaller bear at no additional charge. Both had a copy of the photo on the front of the bear. The woman called back, crying, she was so grateful.”

Linda and Tricia have made bears in memory of people of all ages, from infant to elderly. One family ordered a series of bears made from their mom’s nightgowns. Another family wanted a bear in memory of their little boy who loved pirates.

Linda and Tricia place a small wooden heart with the words “Love you” written on it inside each bear. You can feel it through the fabric. They also sew a patch on the back of each bear that contains some sort of sentiment. One of Linda’s favorites reads, “This is a shirt I used to wear. We made it into this little bear, so when you hold it, know I’m near.” Another popular sentiment is “Love you forever.” The patches can be customized with your own personal message, or a name and date.

Not all the bears are in memory of someone who is deceased. Some people are having bears made now as a keepsake for their children or grandchildren. In fact, Linda has done that herself. Last Christmas she made pajama pants and a matching bear for each of her grandchildren.

When not making bears, the Linda and Tricia stay busy making memory quilts, incorporating fabric from clothing, or photo transfers. And their latest creation is commemorative Christmas ornaments – clear glass globes containing bits of fabric from loved ones’ clothing, topped with a beautiful bow and decorations. 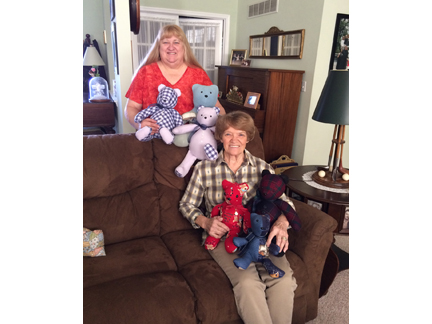 Linda and Tricia (standing) Richardson with some of the bears they have made. 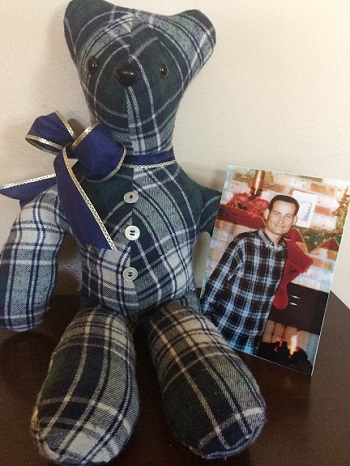 A photo of Linda’s friend’s son wearing the shirt that was later made into a Comfort Bear. 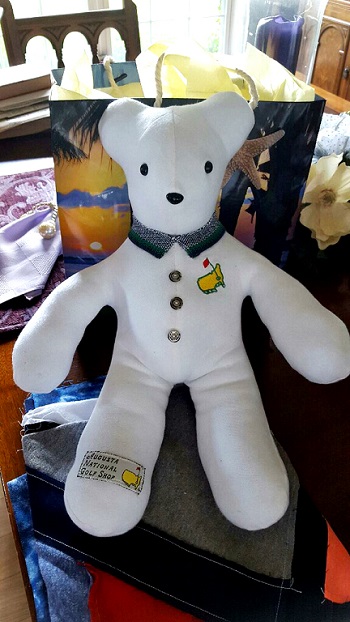 A bear made from a golf shirt, with logos on the chest and foot. 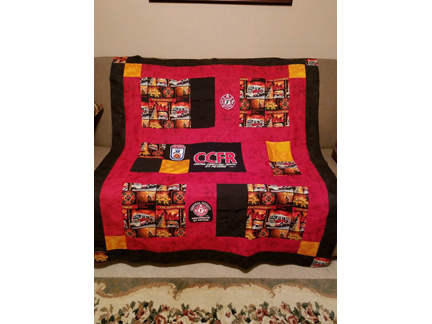 A fire department themed memory lap quilt that Tricia made. 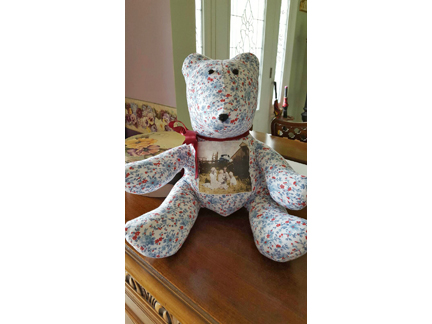 A bear Tricia made for her pastor from his mother’s skirt, with a childhood photo on the front. 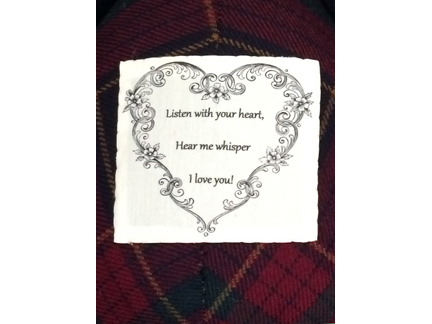 Each bear comes with a patch  on the back bearing an inscription - which can be personalized. 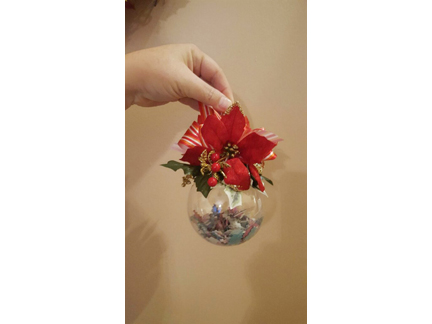 One of the ornaments with bits of fabric inside.