Making sure that our elected leaders keep electric cooperatives in mind when crafting laws and regulations that impact its members was a key focus of more than 2,000 electric cooperative leaders who descended on Washington, D.C., April 28-May 1 for a legislative conference sponsored by the National Rural Electric Cooperative Association (NRECA).

Doug Tracy, General Manager/CEO of Cuivre River Electric Cooperative in Troy, Mo., was among representatives from more than 800 electric cooperatives nationwide who visited Capitol Hill during the conference to discuss a wide range of issues — including the development of rural communities in any infrastructure package and protecting electric co-ops' tax-exempt status — among other topics of importance.

Tracy was among the 70 members of rural electric leaders from Missouri who took part in the annual legislative conference. He was also selected as one of five CEOs from Missouri to lead discussion groups for five members of Congress. Tracy introduced Congresswoman Ann Wagner, the U.S. Representative for Missouri's 2nd congressional district to his discussion group. “It was an honor to be chosen and discuss issues such as the infrastructure bill and the need for grid modernization with Congresswoman Wagner,” Tracy said.

“It’s so important that we meet with elected officials because rural Missourians know the best needs of our communities,” said Caleb Jones, CEO of the Association of Missouri Electric Cooperatives, Jefferson City. “The work the co-ops do is vitally important to rural America and their presence here shows that co-ops are dedicated to working for our members back home.” 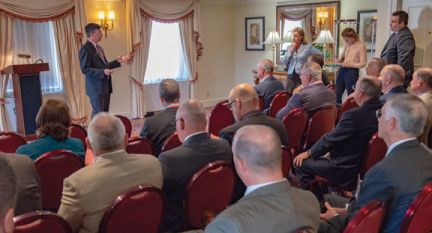