On Tuesday evening, May 21, 2019, an EF1 Tornado with estimated winds of 100 mph hit the Augusta, Missouri area, passing just east of town. Resident Greg Bley snapped a picture of the funnel cloud as it came up the hill towards his house, just before he headed to a safe room in his basement.

Luckily, his home suffered no damage. Bley’s neighbor to the east, Dave Overschmidt, who lives at the end of Hackman Road, said he was watching also. He saw a funnel cloud coming across the bottoms, but as it got closer, he just saw a “big brown wall of water” and heard a loud rumble that kept getting louder. He and his wife also headed for the basement, and when they emerged, they counted their blessings. The Overschmidts lost the roof off a couple of out buildings, and a grain bin was gone, but their house was OK.

“I feel very blessed,” he said. “We lucked out. Everyone is safe, and we have a place to sleep. Our buildings can be fixed. We have a lot of tree damage and things to clean up, but compared to what the people in Jefferson City are dealing with, this is nothing. We’re fortunate it did not hit a little farther west. If it had went through the Town of Augusta, it would have been a very different story.”

Overschmidt said friends and neighbors quickly showed up and started clearing downed trees from his driveway. “They helped me out a lot. They worked from the bottom and I worked from the top, and we got the driveway open pretty quickly.”

Neighbors helping neighbors was also the story in Augusta Shores. The storm did heavy tree damage in that development as well, blocking streets and driveways and in one case, damaging a vehicle. Resident Teresa Waddington said the men of the community immediately went to work with chainsaws, helping each other and clearing the streets. She said she was able to watch some of the trees during the storm. “It was really amazing. Some of the trees bent all the way over, then ‘exploded’ at the ground, yet others survived and straightened back out. It really was amazing.”

Augusta Fire Chief, Bob Struckhoff also said the community was lucky. “We had a lot of trees across roads, but very little structural damage and no injuries.” Fire crews from Marthasville, Washington and New Melle, and other community volunteers helped the Augusta Volunteer Fire Department clear area roads, including Hwy. 94 and Terry Road. There was also significant tree damage along the Katy Trail. The Missouri Department of Natural Resources worked several days getting the trail back open between Augusta and Defiance.

The National Weather Service report said, “The tornado developed about 1 mile west of Labadie in Franklin County, causing some tree damage and then moved north-northeast across the Missouri River in St. Charles County. Extensive tree damage was noted on Sanders Road, Terry Road and Coates Ln. Minor structural damage was noted on a few homes and a few roofs were blown off barns and outbuildings. The tornado was on the ground for 6 miles and was 250 yards wide.” 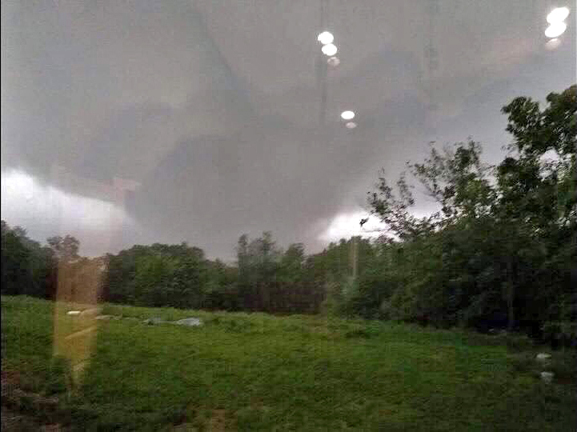 1. A view of the tornado coming up the bluff - taken by Greg Bley, Augusta. 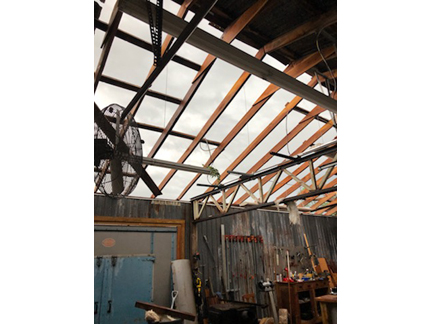 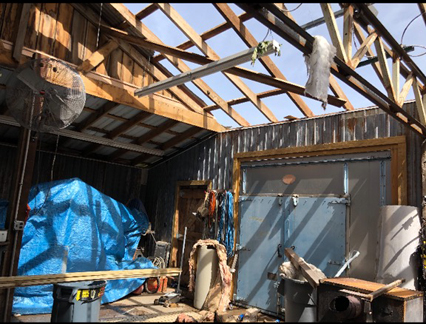 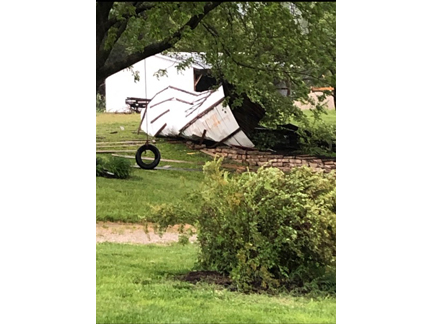 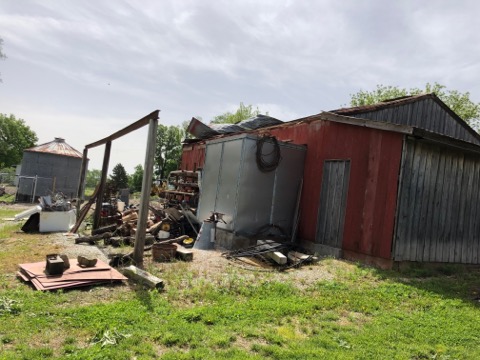 Photos 2-5. Dave and Sherry Overschmidt lost the roof off two out buildings and a grain bin was blown away, but thankfully their house was OK. (Submitted photos.) 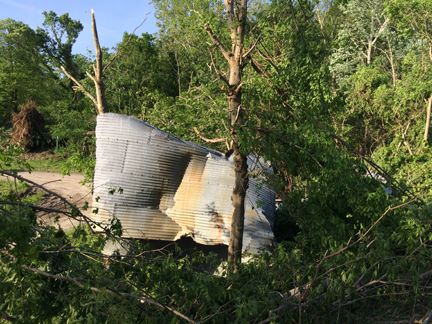 6. The Overschmidt's grain bin was found several hundred yards to the east - at the very end of Hackman Road, next to the Katy Trail. 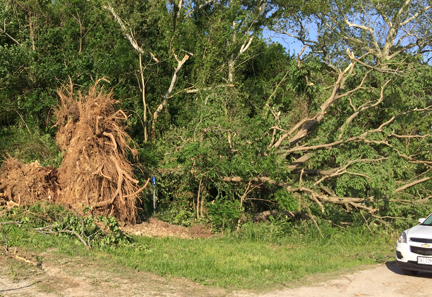 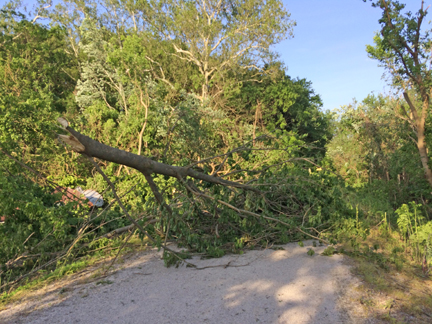 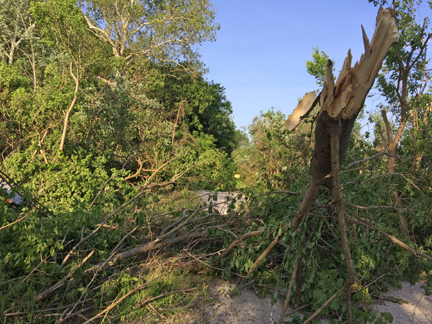 8 and 9. Trees on the Katy Trail near Hackman Road. 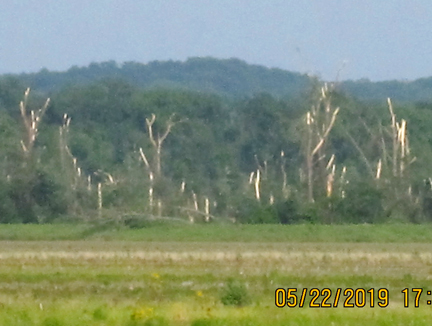 10. Tops of trees were stripped away along a levee east of the the Augusta Ball Park. 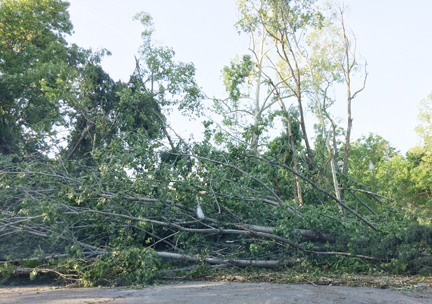 11. A pile of toppled trees near the end of Sanders Road. 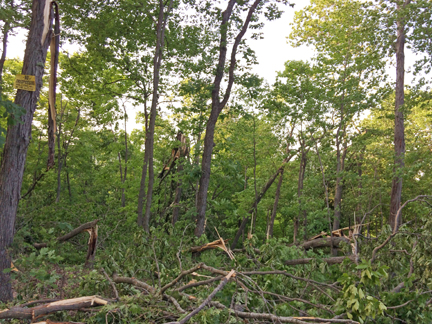 12. Trees broke and fell in all directions - Terry Road. 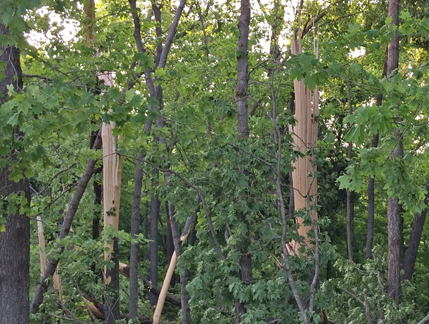 13. In many cases, the bark was stripped off tree trunks as the tops twisted off. 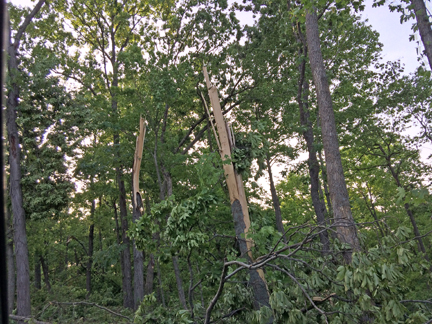 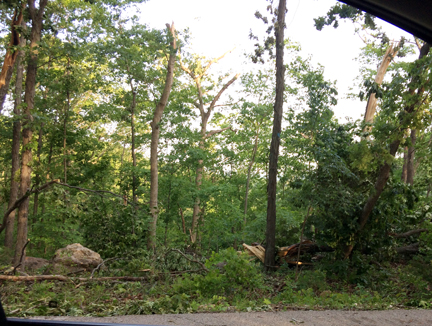