Three very deserving young ladies participated in the New Melle Festival Queen Pageant program this year: Josie Brakensiek, Emma Johnson and Lindsey Molitor. At the coronation ceremony on Friday, June 14th, Josie Brakensiek was named the 2019 New Melle Festival Queen. Lindsey Molitor was awarded the title of Miss Congeniality. All three candidates are to be congratulated and commended for their work and effort.

Josie Brakensiek is the daughter of Gregg and Mendy Brakensiek. She is the youngest of their four children and has two sisters, Jade and Jensen, and a brother, Porter. Josie will be a senior at Francis Howell High School and is currently a lifeguard with the city of O’Fallon. Josie has been a member of the Francis Howell girls golf team for three years, with the last two being on the Varsity team. She qualified individually and with the Varsity team for the MHSSA State Championships, in which the team placed 7th. She won the Most Improved Player Award, the Model Viking Award, the Academic Achievement Award all three years, the Birdie Award twice, and was appointed by the coach for the Viking Leadership Academy. She has participated in the Gateway PGA Junior Golf Tournaments, placing 2nd in one of them. Josie is also a DECA Member and won 2nd place at Regionals and competed in the State Championships. She has made the Honor Roll and has been a member of the Student Council. Josie’s plan so far is to attend St. Charles Community College with the A+ Program and then transfer to a university after two years, where she hopes to be able to play golf. She is undecided in her choice of career, but is contemplating being a hygienist. Josie has deep roots in the community, considering she is an eighth generation “New Mellean”. She loves to hunt, fish, swim, play golf, especially with her dad, and volunteers for her church with various activities. But most of all, she loves it when her whole family is together for dinner. Josie was sponsored by Unified 1 Data Systems.

Emma Johnson is the daughter of Matthew and Christina Johnson. She is the oldest of her three siblings; August, Maci, and Adelyn. Emma will be a senior this fall at Francis Howell High School, where she participates in an array of clubs and activities. Emma is on the varsity team for both cheerleading and track. She is also an active member of FBLA, and has recently taken second in her regional competition. Outside of school, Emma has attended many leadership conventions and travels fairly often. In 2017, Emma was elected to attend a global leadership summit in Washington D.C. and also invited to participate in focus groups determined to resolve political, social, and economic issues. As of now, she is undecided on what college to attend, but wherever she goes, she hopes to pursue a spot on the cheer leading team. Emma is planning to go to school in hopes of becoming a plastic surgeon. Emma was sponsored by Catala Facial Retreat and Boutique.

Lindsey Molitor is the daughter of Chris and Judy Molitor. She is the youngest of three siblings, growing up under her two older brothers Justin and Adam Molitor. This fall Lindsey will be starting her senior year at St. Francis Borgia Regional High School where she will play infield for the varsity softball team. Through school, Lindsey also participates as a member of Student Ambassadors, Soul Singers, and National Honor Society. Lindsey has achieved many accomplishments including academic honors and being part of two district softball championships. Outside of school, Lindsey enjoys volunteering with the All Abilities Athletics special needs program. If Lindsey can’t be found at school or on the softball field you can find her spending time with her friends or family. Her favorite activity with friends is taking long car rides with the windows down and music blaring. Lindsey is sponsored by Halcyon Spa.

Throughout the past several months, the candidates participated in a number of events, including helping with the New Melle Easter Egg Hunt, participating in a craft day and sponsor dinner, holding the annual queen contestants' car wash, coordinating a wonderfully successful Kickin' it for Cancer  kickball tournament fundraiser, and more. All three candidates demonstrated that they are hardworking, upstanding young women who projected positivity and integrity as they interacted throughout the community.

This was the 66th consecutive New Melle Festival Queen Pageant. This long-standing community tradition provides scholarship opportunities for young women who live within the New Melle Fire Protection District. Candidates are selected based on a compilation of points acquired from community service, community involvement, ticket sales, poise and personality, responsibility and interview questions.

At the pageant, the candidates expressed sincere appreciation to everyone and every organization that supported the pageant in any way. 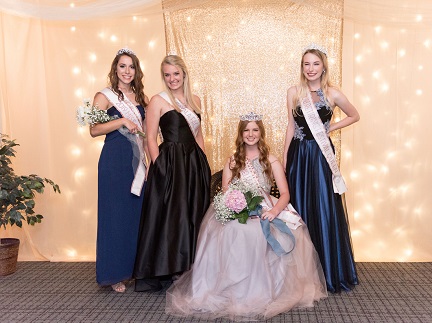 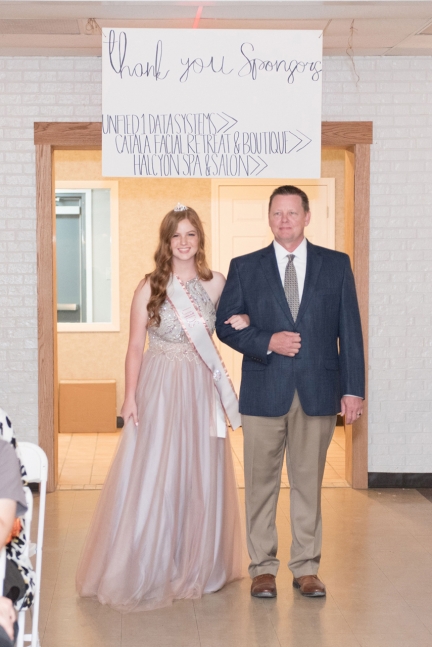 Josie Brakensiek and her father, Gregg. 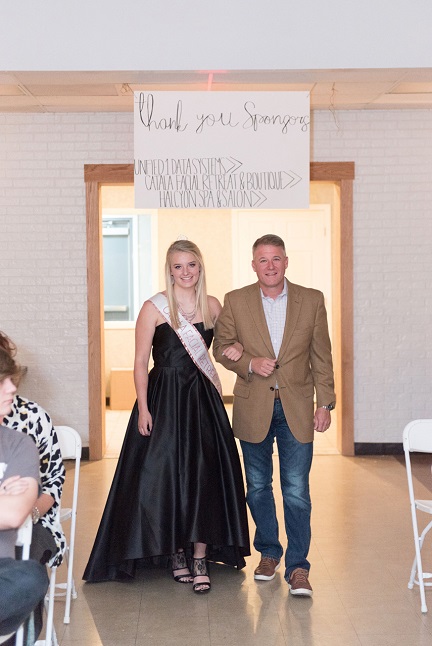 Emma Johnson and her father, Matt. 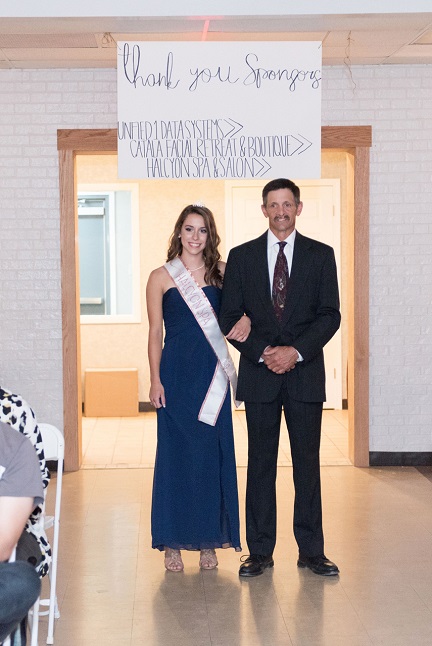 Lindsey Molitor and her father, Chris.