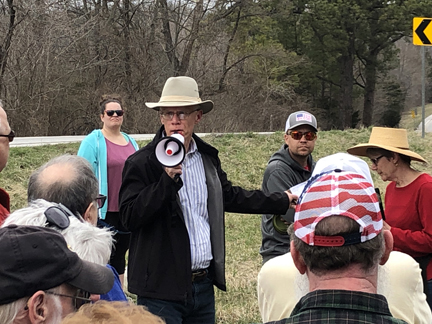 Bob Brail leading a Hamburg history hike. Hamburg was one of the towns wiped
out by the federal takeover 18,000 for a TNT plant for WWII. 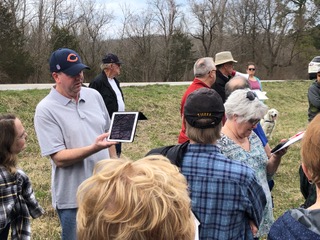 Participants shared photos of the former town buildings and
landmarks on hand-held devices during the tour.

Bob Brail of Defiance received the DAR Historic Preservation Recognition Award in March, 2019. Bob has worked diligently in researching and preserving local history, sharing stories, discovering and documenting cemeteries, developing maps for hiking trails, and more. He regularly writes articles for the Boone-Duden Historical Society and the St. Charles County Historical Society; and produces an online blog about the history in the local area.

Bob has researched and shared stories about numerous early pioneers, including the Boone family, local Revolutionary War and Civil War soldiers, and more; but he has a special expertise about what’s known as “The TNT Area.” Bob researched, wrote and produced a DVD, “The TNT Story” documenting the plight of the people and communities of Hamburg, Howell and Toonerville displaced by the federal government when it took over more than 18,000 acres of land west of Weldon Spring to build a munitions plant for WWII.”

Bob has researched and helped maintain many of the cemeteries in that “TNT” area including mapping hiking trails to various family cemeteries.  He has also written biographical sketches for annual cemetery tours; and this past Spring, led a hiking tour of Hamburg, matching photos of buildings in the former thriving community with their geographical location.
We thank and recognize Bob for his accurate and articulate story-telling. His chronicling and preserving of these stories is an important and significant contribution to the preservation of both our local and national history.  (Info. submitted by Penny Pitman.) 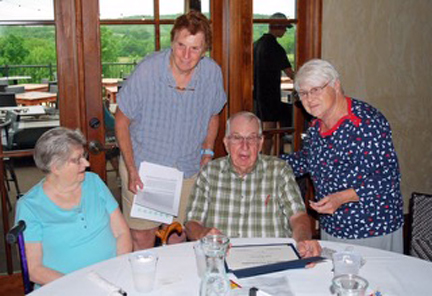 Carl Gerdiman of Defiance received the DAR Historic Preservation Recognition Award in May, 2019. Carl has been an integral part and indeed the muscular part of preserving the history of Western St. Charles County (MO) for decades. His specialty has been caring for cemeteries in this area which played an integral part in some of the big movements of American History, including Lewis & Clark and early traders along the Missouri River, pioneers like Daniel Boone, frontiersmen, trappers, plantation owners, Indian Wars, the War of 1812, forts, settlements, The Civil War, WWI, WWII and more. Many of the soldiers who served in the Revolutionary War moved on to this area and were buried here.

Since 1986 when Carl helped found the Boone-Duden Historical Society he has organized cemetery cleanups. He hauled out chainsaws, brush cutters, pruning shears, machetes, etc. to remote sites to open up and reclaim the space. When the grave markers were found lying on the ground, he set them upright on new cement bases. When he found them broken, he learned and developed a method to install stainless pins with epoxy into the broken parts and fastened them back together, then returned them to the gravesites. Because of his preservation efforts, more than 40 cemeteries and 100 grave markers have been preserved for future generations and genealogists to tell their stories.

Carl has also been the constructor and supervisor of the Heritage Sign Project which marks towns throughout Western St. Charles County. Some of those towns no longer exist because in the 1940s, an area of 18,000 acres was taken over to build a federal munitions plant. The towns, homesteads and buildings were removed and the people of the area were forced to abandon their homes and family burying grounds.

The Heritage Sign project explains and preserves factual information about towns that have disappeared as well as the history of existing towns. The Boone Duden Historical Society raised the money and Carl provided the wherewithal to get the signs constructed and installed.  He developed a system for using wood reinforced vinyl posts to support the signs. He literally builds the signs, arranges for the locations and hauls them out on a trailer for other Boone-Duden Volunteers to erect.

We thank and recognize Carl for his decades-long effort in preservation here at the local level where history is sometimes hidden and could become lost without this kind of effort.