At approximately 3:18 p.m. on Monday, August 19, 2019, 2013 International SA667 Service Truck driven by Robert E. Wheeler, 61, of Warrenton, MO crashed on Hwy. F just south of the entrance to the Buckstone subdivision, which is just south of New Melle.

According to the Missouri State Highway Patrol crash report, the northbound vehicle traveled off the right side of the road, overcorrected to the left and overturned. No other vehicles were involved. Wheeler received minor injuries, was treated on the scene and released. The Highway was blocked in both directions for about 3 hours. New Melle Fire Protection District provided the following photos.

Fire Chief Rick Massey commended Ron Hooper and Gene Joerling of Porky Joerling Trucking for their assistance in gathering the tools that had fallen and scattered from the truck, and securing them into a box trailer that they also provided. Their assistance helped get the road reopened in a more timely manner.

Editor’s Note: Porky Joerling Trucking was recognized last Spring at the Fire Department’s annual awards banquet for their frequent assistance and support of the New Melle Fire Department. This is another example of that support and a wonderful benefit of living and working in a small, close-knit community. 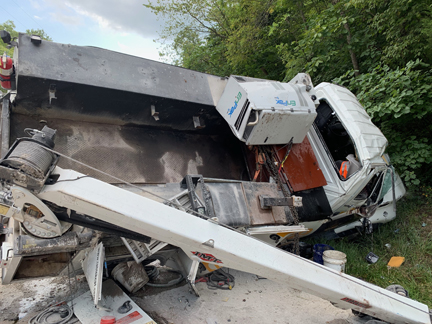 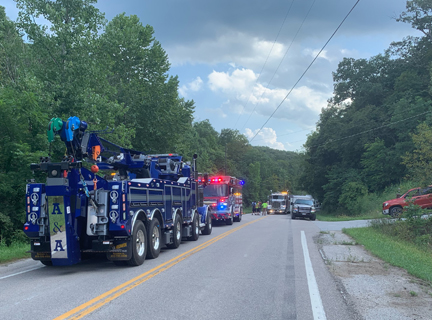 Wrecker on the scene. The road was closed for approximately 3 hours. 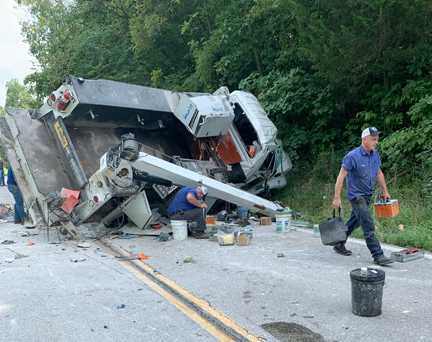 Gene Joerling and Ron Hooper of Porky Joerling Trucking provided a box trailer
and helped pick up tools from the truck which were scattered in the crash.