Annotated by Dianne Sudbrock.  This information is from the Boone Duden Historical Society’s Heritage Sign on Mill Street [Editor’s notes/additions, made Sept. 2019, are in brackets.]

•  1845 – General stores that were in operation were: Rudolph Dercus, Koelling Bros. and Sudbrock & Co.

•  1850 – Conrad Mallinckrodt laid out and surveyed a rectangular shaped town consisting of 16 lots. A post office opened with John F. Dierker as postmaster.

•  1857 – Work began on the Charles E. Meier General Store. The family continued the business until the 1930s. [The building still stands on Mill Street and was listed on the National Register of Historical Places in 2002.]

•  Dr. Theodore Borberg set up his practice of medicine. He was also prominent in grape growing and the production of wine. At one point 48,000 grapevines were growing in the area.

•  1868 – Steam-grinding flour mill was built. The flour from this mill was recognized as the sixth best in the state of Missouri. St. Paul and St. Peter’s German Evangelical Lutheran Churches were united, using the building that St. Peter’s Congregation built of native stone. Today the church and school building are on the National register of Historic Places.

•  1871 – Fritz Kamphoefner’s house was built. It is now the home of the Boone-Duden Historical Society’s Museum and Archives. Beside the house were Kamphohoefner’s blacksmith shop and the Auping wagon-making shop. The Stahlhuth Brick Factory was in operation.

•  John Kessler built a general store and tin shop on Market Square [facing Mill Street next to what is now New Melle Automotive. The store was destroyed by fire in 1977].

•  1880 – Ed Karrenbrock’s Creamery [on Schutzen Street] was in operation.

•  1902 - Dr. Oscar Muhm, MD, set up his practice of medicine. [His home still stands on Mill Street.] The first telephone exchange for this area was set up in John Kessler’s Store. 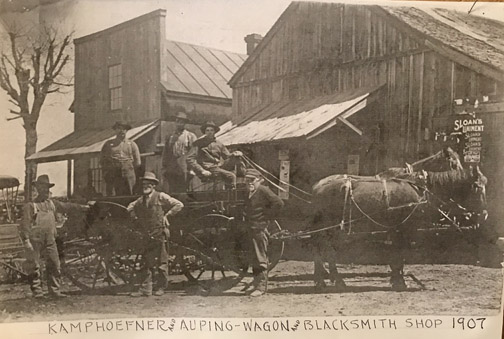 The Kamphoefner and Auping Wagon-making and Blacksmith Shop was located between
the Kamphoefner House (now a museum/archives on Mill Street/Hwy. F,)
and the building that is now Liz’s Bar and Grill.