This year is not only the 180th anniversary of the founding of New Melle, it is also the 850th Anniversary of our sister-city, Melle, Germany!

Prior to the Melle visit, the New Melle group spent two days in Lucerne, Switzerland enjoying a lake cruise; and a Swiss folklore show with traditional Swiss costumes, alpine horns, cowbells, yodeling, homemade beer, music, and fun! Lucerne sits on a beautiful lake surrounded by the Swiss Alps with spectacular views of the Mont Pilatus range. We then boarded the Ullur Rhine River ship for an 8-day cruise from Basil, Switzerland to Amsterdam, which included day tours in the Black Forest, Strasbourg, France, Heidelberg, Cochem on Mosel, Rudesheim, Cologne, and a canal trip through Amsterdam.  Jan and Ron Williams, who had “newly found” cousins through DNA matches, met with cousins in Basil prior to boarding the cruise ship.  Their two grandfathers were brothers.

We were met with “open arms” by our dear friends in Melle!  Wolfgang Dreuse, president of the Melle-New Melle Freundeskreis (the German Melle-New Melle Friendship group) had arranged host families, which included the Pappenbaums (who were guests last September in New Melle), the Aulberts (cousins of the late Clifford Aulbert of New Melle), the Röpers (who have been a host family to the Hammels for 30 years!), and Klaus and Marion Preussler (cousins to Bryan Uhlmansiek).

The Freundeskreis arranged an interesting tour for our group, which included a visit to Pappenburg, Holland to see how cruise ships – both large and small are made. It was fascinating to learn they are put together in segments and travel down a very narrow river to the coast!  Unbelievable that they could make this journey!  We also visited a quaint, small village with lily ponds, swans, flora and fauna, and enjoyed iced coffee and cake.  Another evening was spent with a dinner for just our group in a beautiful garden atmosphere in rural Melle. It was such an enjoyable evening, renewing old friendships (some 30 years in the making), playing an old hand organ, and reminiscing. A parade was held on Sunday evening with participants in costumes from the 1800’s, music, etc.

The highlight and reason for the trip was to celebrate the 850th anniversary of founding of Melle.  Melle has 10 sister cities – but New Melle, Missouri, holds a “place in their heart”, as many in our area are actual descendants from the original settlers of New Melle and the St. Charles County area in general.

A special gift, a handmade stained glass picture of the New Melle/Old Melle statue was presented amid “oohs and aaahs” during the official “sister-city” reception in the center of Old Melle.  The gift was given by the New Melle-Melle Friendship Society and created by artist, Julie Bishop Day from Glassworks in Old Town Saint Charles.  A special thank you to Brent S. Barton, President of VSM Abrasives Corporation in O’Fallon, Missouri, for shipping the gift to Melle.  The owner of this company lives in Melle , Germany and has visited New Melle, Missouri.

Stage shows, a parade  featuring 1800s costumes,  sister city booths were concentrated in the town square in front of the courthouse.  The Freudenskries booth was very popular, displaying photos of New Melle, gifts we had made for them, information on becoming part of their group, and other items.

Please consider joining us! The New Melle-Melle Friendship Society meets on the first Monday of every odd numbered month in St. Paul’s Lutheran Church hall at 7:00 p.m.  We need younger members in order to maintain this partnership!  The German counterpart actually has more members than we do.  If you are interested in participating in this unique friendship, please contact:  JoAnn Hammel (636-398-5952) or Barbara Auping (636-828-5421). 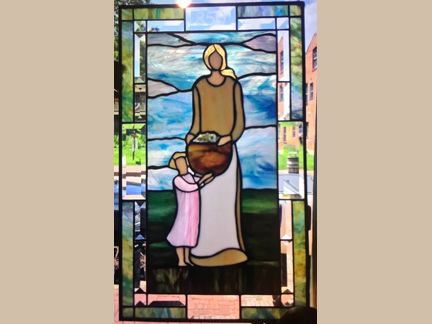 The New Melle Friendship Society gave this beautiful stained glass
picture to the Germans at the 850th celebration in Melle, Germany. 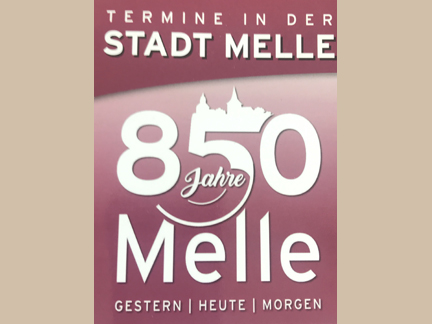 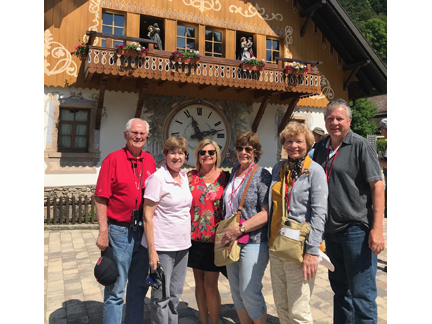 Members of the Melle-New Melle Friendship Society visited the
Black Forest prior to arriving in Melle, Germany in June, 2019. 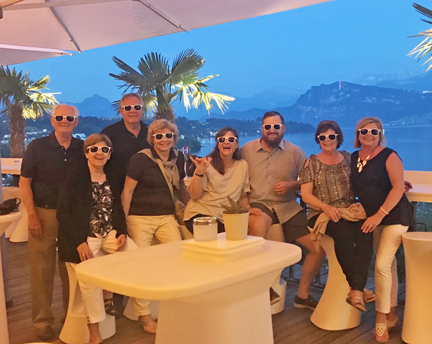 Enjoying a lake cruise in Lucerne, Switzerland, prior to arriving in Germany. 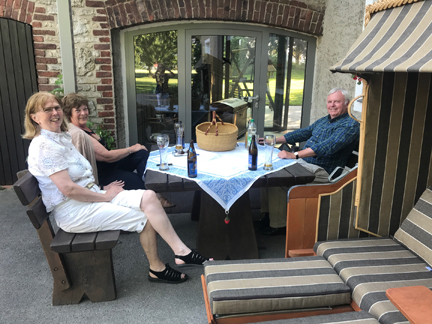 Visiting with a host family in Melle. 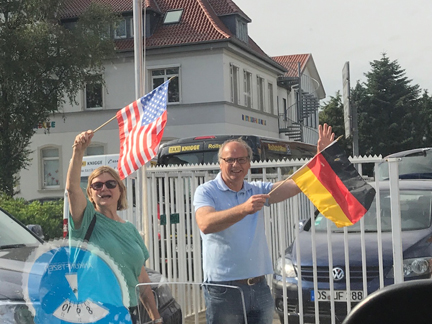 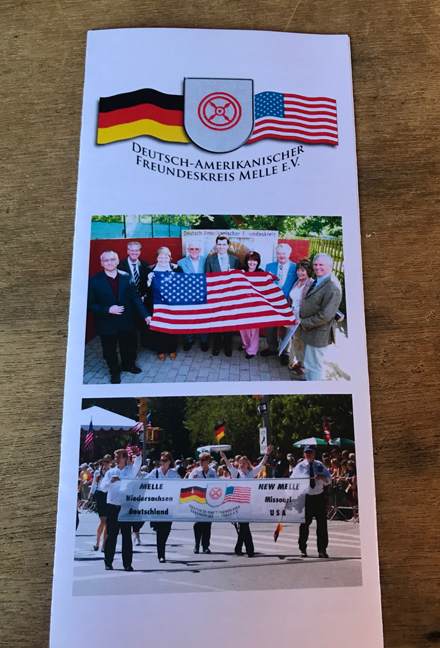 A banner showing milestones from the years of friendship between the two cities.