Bernardo Brunetti loves history, and perhaps even more than that, he loves introducing others to unique and interesting ways of experiencing how life used to be.

Preserving a beautiful and historic property was the foremost goal in 2009 when Bernardo and his wife, Dede, purchased a 54-acre farm near Marthasville.  But sharing that love of history has become the driving force in opening up what is now known as “Boone Monument Village” to the public.

The property has a rich history. It was originally owned by the Bryan family – Rebecca Boone’s nephew – and is adjacent to the Daniel Boone Monument, marking where Daniel and his wife Rebecca were buried.

At first, the Brunettis intended the property to be a personal weekend getaway. They started cleaning things up. They buried the utilities and removed 3-4 old buildings, preserving whatever materials they could. Then they restored the barn and the original Bryan family log cabin — a one-room cabin from the late 1700s which was in major disrepair.

They started receiving interest and inquiries from the community, so they hosted a couple of candlelight Christmas tours, some historical reenactments, and a few small weddings. They soon realized that instead of a weekend home, they needed to do something more meaningful with the property.

As time and finances allowed, they continued to make improvements and add historic buildings, and the idea of offering historic B&B experiences and a more professional event venue was born.

Today, Boone Monument Village (BMV) offers two log cabins, a stone cabin, a beautiful 19th century 2-story house, a tipi village situated near a lovely man-made lake, a Conestoga wagon and a sheepherder’s wagon – all of which can be rented individually or in various combinations for overnight stays or events. The type of events range from individual family camping experiences to bridal showers, meetings, family reunions, and elegant weddings in a scenic, historic, country setting.

About four years ago, the Brunettis began work on expanding the barn, adding a beautiful banquet room, patio and updated kitchen, providing capacity to accommodate up to 200 guests.

With each new addition to the property, the Brunettis have been careful to pay close attention to the quality and authenticity of the original construction. The exterior walls of the expanded barn are covered with the same type of circular sawn, oak planks that were used on the original structure. “We wanted the new addition adjoining the original 1860 barn to look like it would have been built 150 years ago, and expanded organically with a couple ‘saltbox lean-to’ style additions,” Brunetti said. “We found a lumber shop ‘conveniently located 4-1/2 hours away,’” he joked, “that could cut the boards with a circular saw for us which are, except for the aging part, almost identical to the original barn siding.”

Inside, materials for the 2-story west wall of the new banquet room came from an 1830s German-built house along Wolf Creek, just a few miles from the farm. The wall features exposed wood beams arranged in a Z-type pattern. Brunetti explained that the German’s used different construction techniques than the earlier English settlers. The German houses were less ornate, more practical and efficient, and often used wood stoves rather than fireplaces for heat.

The most prominent building on the property is the stately, 2-story brick house, circa 1860, built by the Dickhouse family, who were the third owners of the property. The house sits on the same foundation that once supported a two-story log home built by the Bryan family. The residence was painstakingly restored in 2011-2012 to reflect its original feel and appearance, but with hidden modern conveniences. The entire home has been furnished and decorated with period antiques (or when necessary, quality reproductions) depicting the early English and German settlers’ presence in this part of Missouri. It can be rented as a complete unit, or by the room and has a semi-private bath.

Brunetti said, “We try to pay a lot of attention to detail and use materials of the time whenever possible. Boone Monument Village was not born as a business, it was born more as an idea, a dream, influenced by an interest in history and visiting multiple historic sites. We needed to integrate a commercial component to our historical mission in order to keep expanding the Village. We have 5-6 other buildings we’d like to add to the property.”

One of the planned additions is the historical Van Horn Tavern donated by the Columbia Missouri Historical Society. The log structure, circa 1829, was the oldest remaining stage coach tavern in Missouri. It will be reerected along the front of the property near the road. Brunetti said he is planning a u-shaped building, with the restored tavern in the center, a modern commercial kitchen on one side, and lodging on the other. The facility will feature a wraparound porch and it will be a place where people can gather, spend the night, maybe rent the entire place for an event, or have small group lunches or dinners.

Another planned addition is a chapel which will be located near the red school house. The school house, which sits on a hill overlooking the lake and other buildings on the farm, was originally built about 1840 by a French settler in Erie, PA. In 1900, the school was moved 39 miles west to Conneaut, OH. Both towns are along Lake Erie. The story goes that the building was pulled by oxen, and along the way, children from schools along the route gathered by the roadway to watch it pass by.

Over 100 years later, Brunetti saw the school for sale on Ebay. He bought it and moved it 680 miles to the farm in Marthasville. For that move, all the inside plaster was removed, the floor was taken up, and the building was cut into sections which were loaded into trucks. When the school was reerected, the original two front doors (one for boys and one for girls) were retained, and a bell was added, which now tolls for wedding ceremonies on the property.

The chapel that will be added is a younger structure, circa 1889, from Linn, MO.  It has been taken down and is in storage, waiting to be reerected. Brunetti said he hopes to have all of the planned structures up and available to guests in the next 5-8 years.

The Mellein Log Cabin, circa 1860, was moved to the site from Belleville, IL. Couples who get married at Boone Monument Village have the option to spend the night in the Mellein Cabin, which features authentic period furniture, luxury linens, and hidden modern amenities such as a mini-refrigerator, stove, and a bathroom complete with a beckoning claw-foot tub.
The newly restored Alferman stone cabin, which was originally located in Franklin County, Missouri, is appointed with carefully restored period antiques, a wood-burning fireplace, and an inviting porch that will bring out the poet, the artist, the reader and the writer in you! In keeping with the historical nature of the village, a full bathroom is located steps away in the Dickhouse residence.

If you want a little more authentic pioneer experience, spend the night in the Conestoga wagon, which cozily sleeps 6, or the Sheepherder’s Wagon, known as the first “RV”; or bed down in one of the tipis (in glamping style) near the lake.

A stay in the Indian Village setting, bordered by a 400-foot sacred “earthen serpent”, can be enhanced by authentic Native American flutes and chants playing in the background, and/or Native American living history demonstrations.

Daytime activities for overnight guests include fishing, nature walks, games, bicycling the Katy Trail, and cooking on an open fire under the stars!

Boone Monument Village also offers “goosebumps” tours based on unexplained phenomenon that have happened on the property in the last 10 years. These tours can be day or night, include wine and a bonfire, and contain lots of humor.

There are other, unique optional packages/accessories available, such as outdoor painting with easels, leather journals for writing, star gazing equipment, cast iron cooking utensils and more, designed to enhance guests’ experiences “away from the distractions of the modern world,” Brunetti said.

While there are no TVs at Boone Monument Village, the cabins do have electric, Internet access, plus heat/air conditioning. The tipis and wagons have wooden floors, electric and Internet, and heating/AC units which work “up to a point” based on the weather.

For Brunetti, one of the most rewarding things about opening the property up to the public has been the effect on children who visit. “We want them to put down their electronics, experience nature and learn about history,” Brunetti said.  One of the best compliments we ever received came from a young girl who told her grandfather after camping in the Conestoga Wagon, “This was the best day of my life!”

Tours of the property are available the fourth Sunday of every month, at 1 and 3 p.m. Private tours at other times are available by appointment for a nominal fee. For more information on celebrating an event, touring or renting any of the facilities, visit www.boonemv.com or contact Torrie Roodhouse, Manager, at 636-236-3926 or email This email address is being protected from spambots. You need JavaScript enabled to view it.. You can also follow the business on Facebook and Instagram. 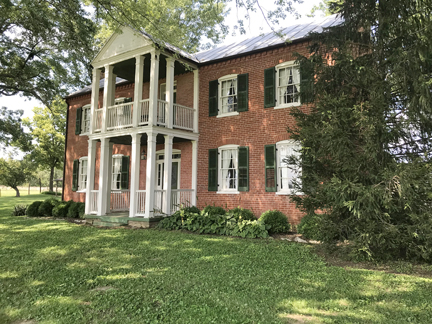 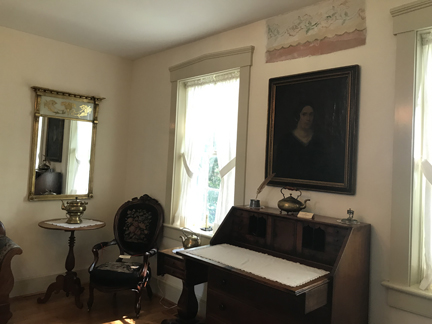 The Dickhouse Home Parlor - where some of the original stenciling
has been preserved on the wall. 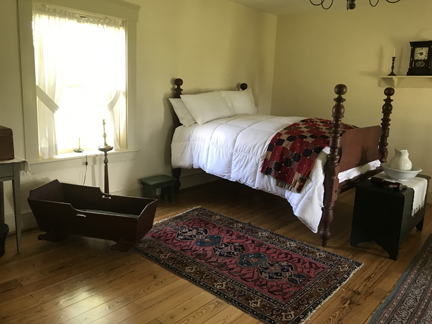 The Dickhouse Home - The Rebecca Room. 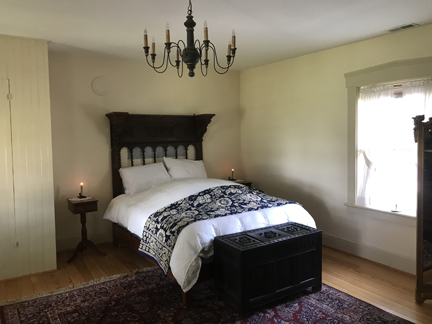 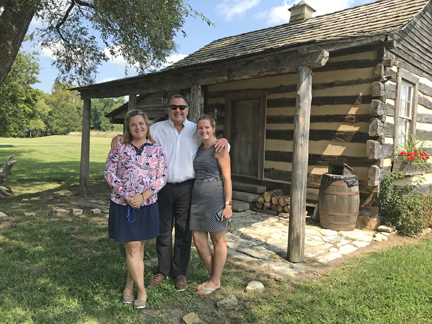 Owners Dede and Bernardo Brunetti and Torrie Roodhouse, Manager,
outside the Mellein Cabin. 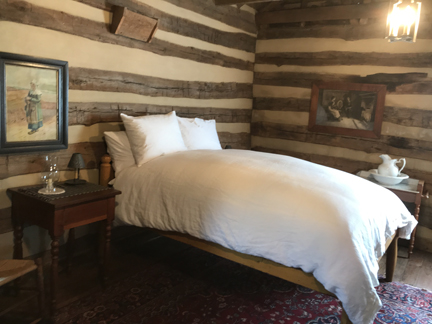 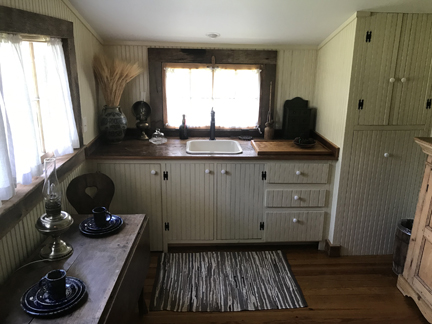 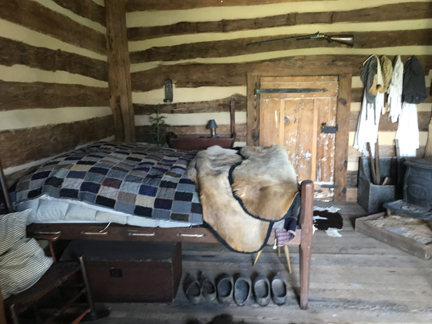 The inside of the older Bryan Cabin. 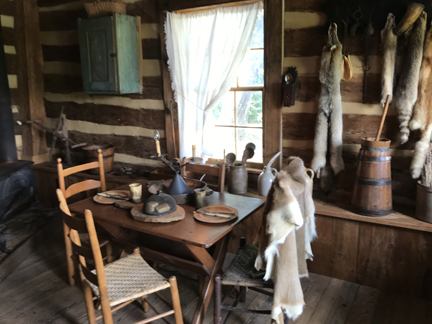 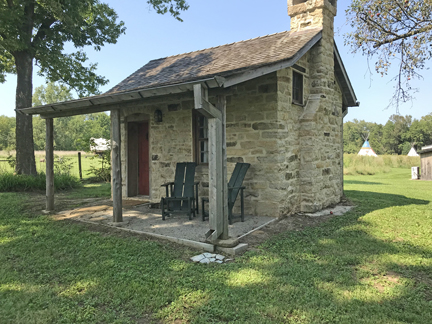 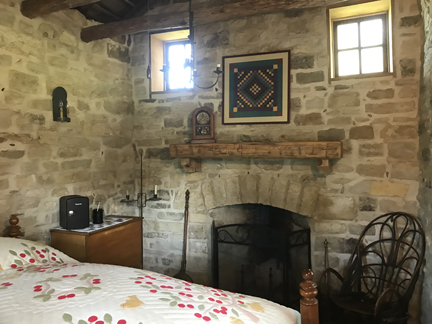 Inside the Alferman Stone Cabin. 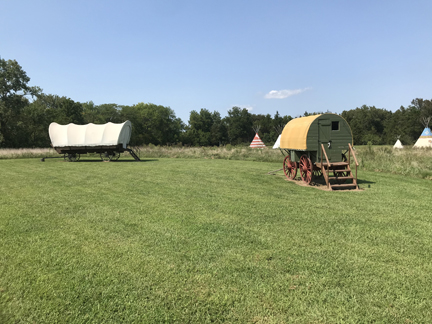 The Conestoga and Sheepherder's Wagons. 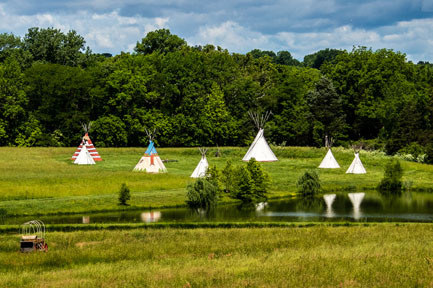 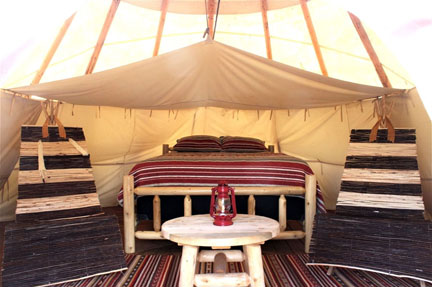 The inside of one of the tipis. 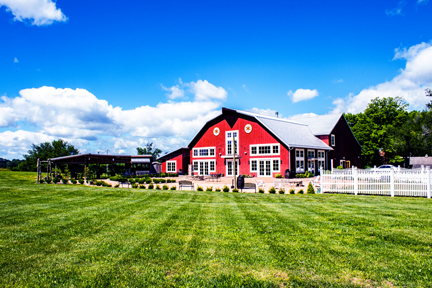 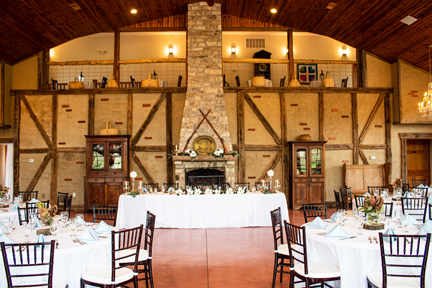 The wall inside the banquet center built with material
from an 1830s German house. 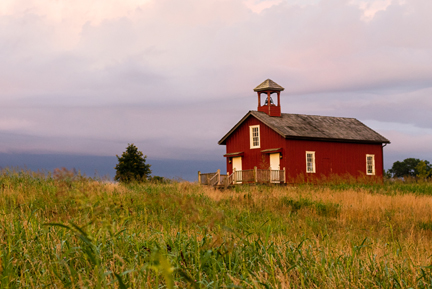