The Defiance Merchants Association would like to thank everyone who participated in and attended our 10th annual Christmas Festival - the biggest and best ever!

We had the largest crowd ever to watch the parade, and a record number of participants in the event. Prize winners were Best Car–a black 1937 Chevy Master owned by Paul Musket; Best ATV/UTV/Golf Cart–a Can-Am by the Schmidt/Reth families with Kendall Schmidt on the back in a Santa suit. Best Horse was Bella (a pony ridden by Mack) owned by Sarah Boekamp. Best Horse/Owner Ensemble was Titan (large draft Horse) owned by Dave and Steph Muesli. Best Dog was Parker, a Bouvier, owned by Jena and Brent Baumgarten. Best Dog/Owner Ensemble was the Stanley Cup Pups owned by Renee Betlach and Rhonda DeGeal (dressed in a St Louis Blues theme.)  Best Social Media “Liked” Pet, was won by Danny (Dog) owned by Don and Karen Faucett. The Best Float was the R.O.M.E.O. (Retired Older Men Eating Out) Club float - well-decorated in a military theme. Each of the prize winners won $100 sponsored by area businesses. (The winners of  the best float donated their prize winnings to The Focus Marine Foundation.)

Special thanks to this year’s judges: Bill and Chris Schaul & Denis and Diane Raab (Cars/ATVs etc), MJ King and Cindy Roberts (Horses) and Tim and Judy Hennessey (Pets). All judges helped with the Best Float award.

We were especially honored to have as our special guest in the parade, WWII Veteran Yoeman 2nd Class USN Wayne Surgeon, 95 years old, from Florissant. He served on the USS Tennessee BB-43.

Since the parade fell on Pearl Harbor Day, it had an extra military emphasis this year, and we received many great comments from veterans that both participated and attended, especially the Vietnam vets. A number commented, with tears in their eyes, that they felt this was the Homecoming Parade they never got.

What a great DMA team effort!

Thanks to everyone who worked so hard on this year’s event and helped make this the best parade yet!!! 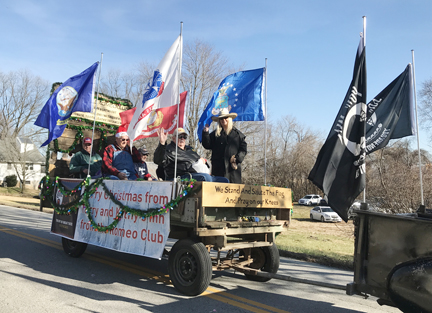 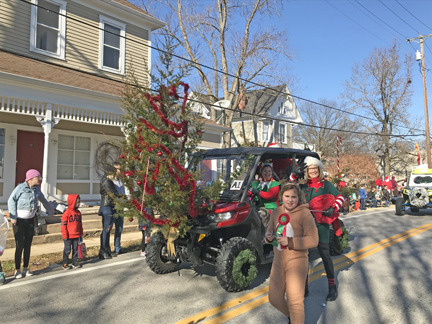 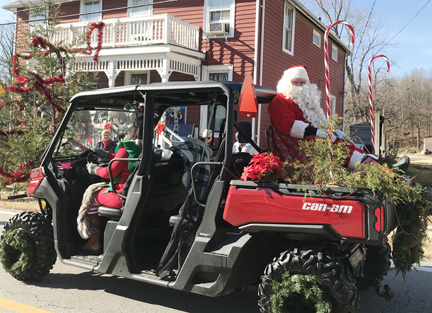 Best ATV/UTV/Golf Cart (back) – Kendall Schmidt on the back in a Santa suit. 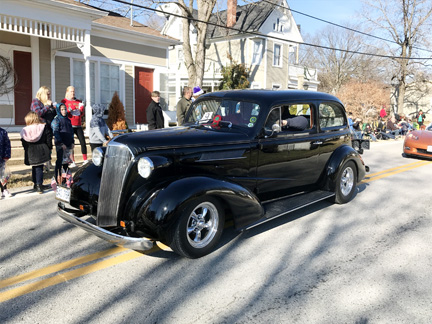 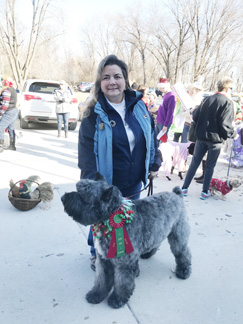 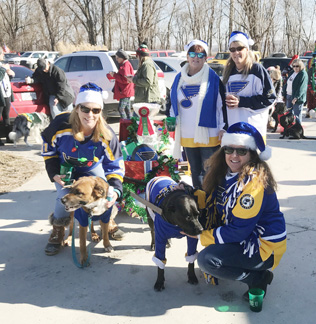 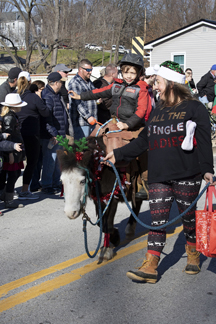 Best Horse was Bella
(a pony ridden by Mack)
owned by Sarah Boekamp. 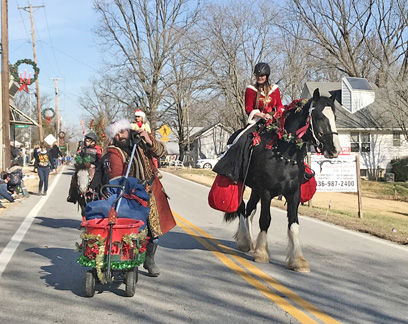 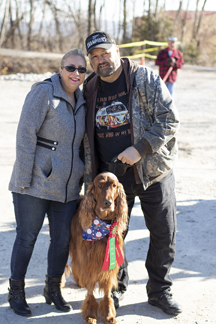 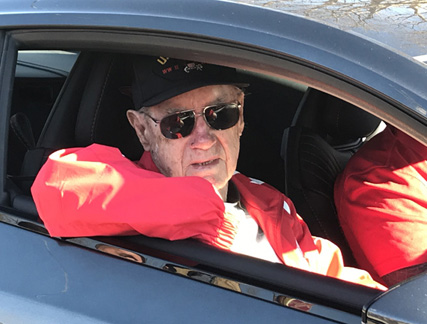 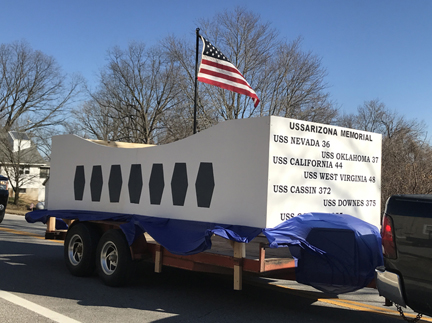 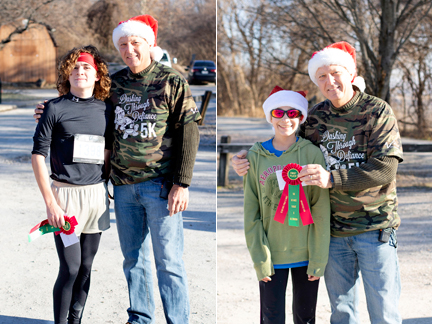 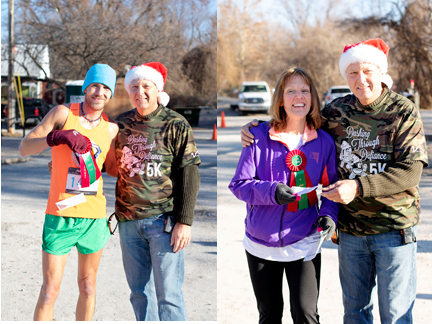 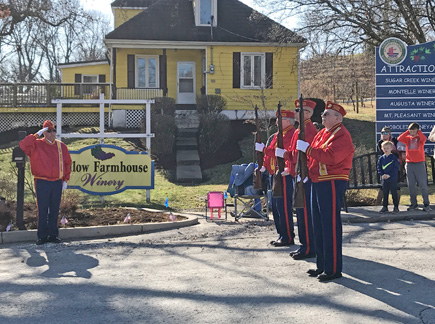 When the beginning of the parade reached the intersection
of Hwy. 94 and Defiance Road,
the St. Charles Marine Corp League did a gun salute. 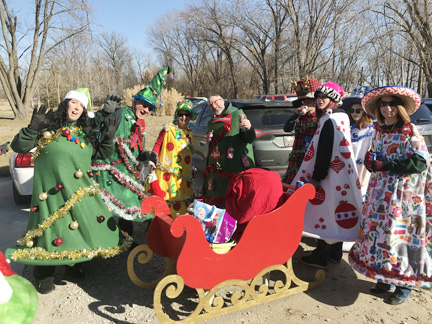 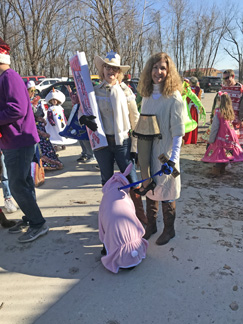 A dog dressed as a pig. 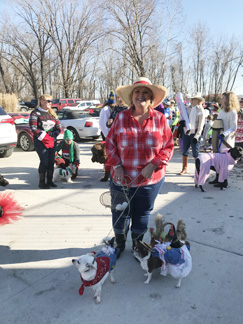 Cheryl Hueffmeier and her two dogs. 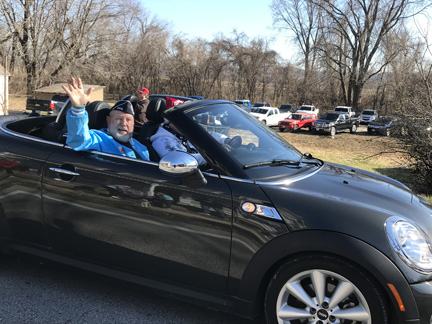 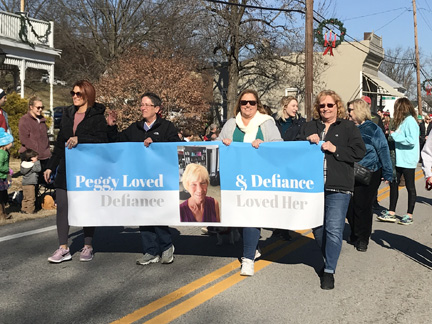 Salute to Peggy Buhrman, owner of Piazza Deli,
who passed away earlier this year. 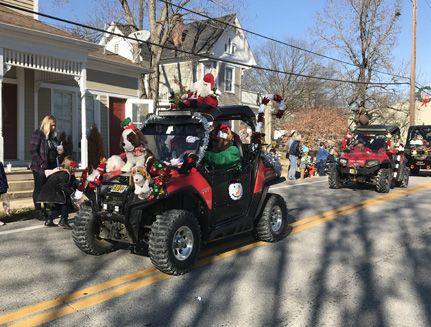 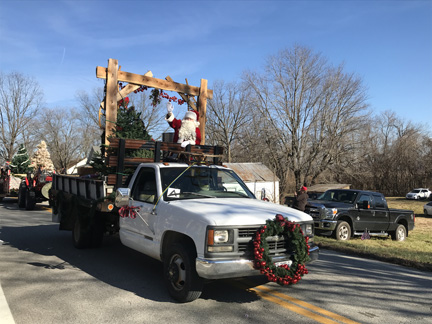 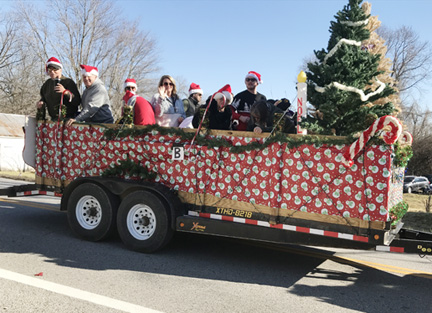