Save the Date! On March 14, 2020, a great evening is being planned at the Harmonie Verein in Augusta that will honor and celebrate the past while setting the stage for success in the future.

For the last four and a half years dedicated citizens in the community of Augusta have been working toward the goal of preserving and renovating the Augusta American Legion Hall as a Cultural Arts Center for the Town. The Augusta American Legion building and property has a rich history dating back to the Harmonie Verein – a German musical/cultural society that existed from 1856 to 1922. Throughout its history, the property has provided a venue for community events and social gatherings. As a Cultural Arts Center, it is hoped the property will continue to promote and showcase Augusta’s historical, cultural and community amenities for decades to come.

The preservation effort started in 2015 after the American Legion sent letters to the Town Board and the Greater Augusta Chamber of Commerce asking if there would be any interest in purchasing the property. Community meetings were held and a consensus was reached that the property was worth preserving. The question then became how to do it. Ideas were exchanged, plans were laid, events were organized, a non-profit entity (the Augusta Heritage Foundation) was formed in 2016, and fundraising began.

Now that ownership of the property is official, the Augusta Heritage Foundation is planning a celebration and fundraising event at what is now, once again, being called the Harmonie Verein Hall, 5333 Hackman Road.

Trey Smith, who recently took on the role of president of the AHF after serving a couple of years on the board of directors, said the overall goal remains the same: “Preserve the property for the purpose of promoting cultural arts in the Augusta region.” “But we have to maintain two aims: 1) We have to do business as a really good regional arts center, and 2) we must also focus on paying off our loan and rehabbing the building.”

“For goal #1,” Smith said, “We’re asking for the community’s ideas and creativity to provide high quality, fresh programming with a wholistic menu of events. For goal #2, we will be seeking federal grant money and organizing fundraising opportunities. Our primary focus, as we move forward, will be to try to mobilize talent towards both goals simultaneously.”

For the rehab, the group plans to pursue Federal Grant money since the building is on the National Register of Historic Places. Smith said, “The building rehab is going to be a bit challenging, for sure. It’s got good bones, but we know with the age of the building, it will present some challenges. I’m prepared for that, and I hope the community is as well. We should expect that it will take some time, and there will be some hurdles along the way.”

Smith also said, “We have no plans of losing the charm and integrity of the old building. There are lots of ways to refurbish property with modern materials and still maintain the nostalgia.”

“At the same time,” Smith said, “we are putting together a plan for how a cultural arts center in this quaint, romantic little town can flourish and provide something the public really wants. We plan to host events that reflect some of the creative things that have taken place in the past – everything from theater to culinary arts to educational programs for kids, music, all kinds of artists, etc. There have been several new events and programs over the past several months, and we plan to continue and build on those efforts going forward. The building is also available to rent for weddings, anniversaries and other social/community gatherings – as it has been in the past.”

Smith also hopes to increase relational bridges in the St Louis region in the industry of cultural arts – such as other cultural arts centers, arts councils, etc. to build some partnerships and get some coaching from people who have been successful in this type of endeavor in the past.

Smith has lived in Augusta about 2-1/2 years. He said it took him about one day after moving here to fall in love with the place. “Because this community feels like family,” he said. “It’s amazing how the people come together. There’s such an eclectic mix, from the multi-generational farm families to the more cosmopolitan newcomers, to an amazing group of unassuming, down-to-earth, multi-talented local musicians and artists (some world renowned) who all live in this very quaint, charming, close-knit community of Augusta, MO. I’m humbled, and yet honored, to be a part of it.”

At the March 14th event, there will be a selection of fundraising opportunities. Smith said, “We will be asking people to consider giving money – either one time or over a period of time – and we might have some auctions or raffles, etc. Going forward, the AHF will be creating some new fundraising events and continuing some already established, such as the monthly Augusta Ramble musical events, the Tailgate Tuesdays during the summer, art camp for kids, another art walk, a symphony event, etc.  But we are also encouraging the public to come forward with their own ideas for events, the proceeds of which could support the Harmonie Verein purchase and renovation. We want this to be a community affair. We are encouraging the community’s creativity.”

Smith said, “I always say, you’re born into a time which you have no control over, but after that, it’s your responsibility to respond to the time and place in which you live. This project provides a way in which I can give my energy, my heart, and my love to the vision and the dream for the Augusta area: For the Harmonie Verein to become a small, but effective and attractive, cultural arts destination — in Augusta, Missouri, the first federally designated viticultural area in America.”

Smith said, “All of us here are standing on the shoulders of others who came before us and helped get us to this place, from the Harmonie Verein Society members 150 years ago to the American Legion members, to everyone in recent years that has worked toward this moment. I’m incredibly grateful to be in this place at this time, and excited to help ‘row the boat.’ (And I know I better not mess it up!)” 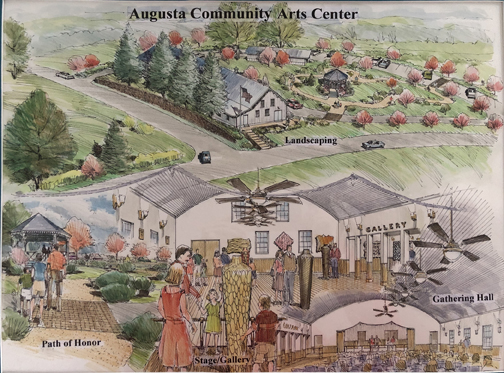 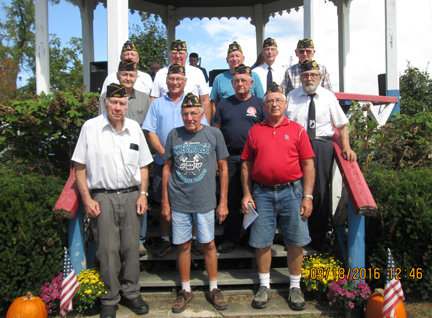 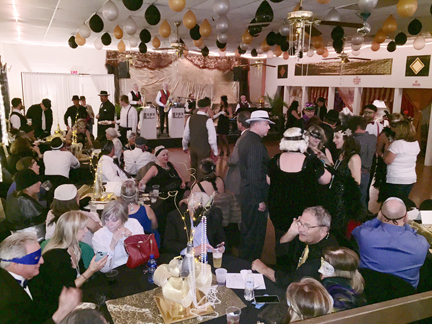 Scene from the Masquerade Ball at the Harmonie Verein, 2017.
Photo by Kathryn Frazier - 2017.