On May 31, 2019, the St. Francis Borgia Knights Varsity Baseball Team, Washington, MO, won the Class 4 State Championship — for the first time in the school’s history — topping off a record setting 23-7 season.

That accomplishment garnered Head Coach Rob Struckhoff the Missouri State Class 4 Coach of the Year Award by the Missouri High School Baseball Coaches Association.  A few weeks later, after being nominated by other coaches from Missouri, Struckhoff was named the Diamond High School Division II Coach of the Year for Region 5 (an eight state area) by the American Baseball Coaches Association’s (ABCA). Voting for that award occurred at the College World Series in Omaha, NE in June. In early January, 2020, Struckhoff and other award winning coaches from across the U.S. were recognized at the ABCA National Convention in Nashville, TN.

Struckhoff is a graduate of St. Francis Borgia High School (1991.) He was born and raised in Augusta, Missouri with his parents, Bob and Connie Struckhoff, and 3 siblings – Cori, Stefanie and Brian. He is married to Angela (Obermark) from Washington, and they have three children: Owen (a Junior at St. Francis Borgia), and Avery and Case who attend St. Vincent de Paul School in Dutzow.

Growing up, Struckhoff played little league baseball in Augusta, then moved on to high school baseball at Borgia and American Legion Baseball in Washington. In college, he played at East Central in Union, Missouri, then Central Methodist College in Fayette, Missouri.

In college he played outfield and third base, but throughout his lifetime, he has played just about every position. “That diversity has really helped me as a coach to be able to help players in different positions,” he said.

Struckhoff spent the first year of his career coaching JV baseball at Washington High School, then moved to St.  Francis Borgia. This coming season will be his 22nd year coaching at Borgia, and his 21st year as Head Coach.

Over his 20 years at Borgia, the school has won six district championships and been to the state quarterfinals one other time, but this was the first time in the school’s history to win the state championship. The last time Borgia had made it to state was in 1976 — they took 4th place. In 1975 they won second place; and before that, they won second place in 1957. “2019 was the first year we made it over the hump,” Struckhoff said.

Borgia’s record for 2019 was 23 – 7 (a school record for wins in a season.) Struckhoff’s overall career record as a coach is 326 – 161. “We’ve had a lot of good players over the years, with 44 going on to play college baseball, and 5 to play professionally.  One is still playing professionally. It’s been neat to watch those players move on and have success,” he said.

Struckhoff added, “But individual success doesn’t come without having a great team. We’ve had a lot of good teams over the years, just never quite got the milestone win. This year our guys played really well throughout the season. It was a really fun year, and we had a lot of success.”

Winning the Championship was particularly special to Struckhoff because Borgia is his alma mater, and also because his son, Owen, played on the team. “It’s a really neat thing to be able to coach your son and win a state championship all in one year. That’s pretty cool,” he said.

Struckhoff attributes a lot of his own, and his players’ success, to small town roots. “Growing up on the farm and in a small town teaches the importance of hard work, family, and faith. We had a lot of small town guys on our team last year. When you read the team roster, you’ll recognize a lot of local family names. All that played a hand in our success.”

There were 7 seniors and 7 juniors on the team last year, so some of same players will be coming back for 2020. “I’m excited to get started,” he said. “We start practicing in just 6 weeks and play our first game at the end of March. We’ll see how it goes. Every year we hope for success — that everyone stays healthy and uninjured, and plays to their full potential. It should be fun!” he said. 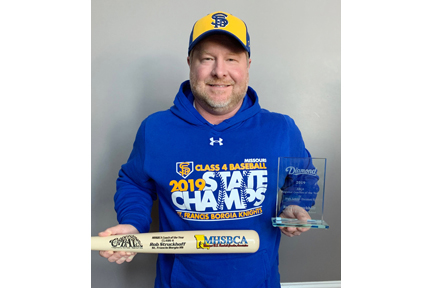 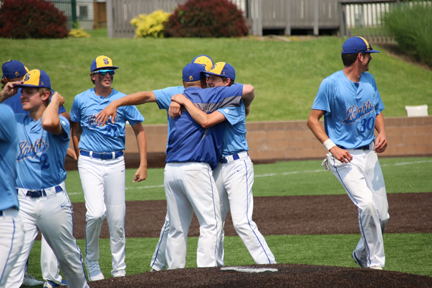 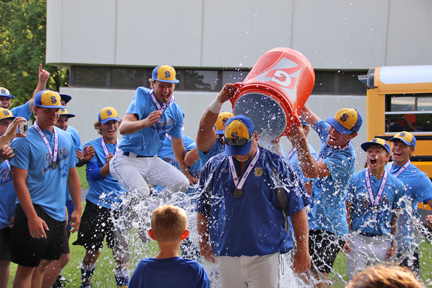 Coach Struckhoff getting drenched during the celebration. 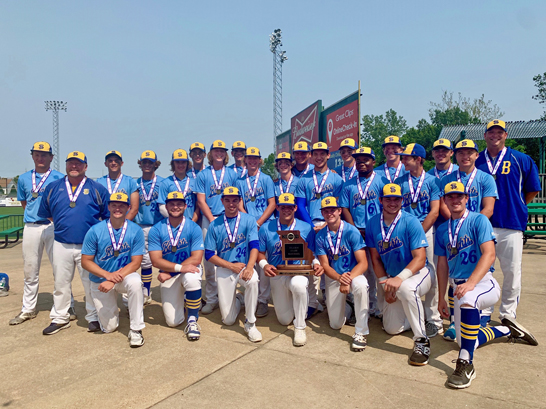