MDC encourages public to Be Bear Aware this spring

MDC encourages public to Be Bear Aware this spring

MDC reminds people that a “fed bear is a dead bear.”

JEFFERSON CITY, MO. – The Missouri Department of Conservation (MDC) estimates that Missouri is home to about 540 - 840 black bears with most being in the southern part of the state. As spring gets underway, these magnificent mammals leave their winter dens in search of food. MDC reminds Missourians to “Be Bear Aware.”

“As black bears become active in the spring, they are on a mission to find food,” said Conlee. “Keeping areas free of attractants and letting bears find natural foods is in everyone’s best interest. If you see a bear, let the animal be and enjoy the sighting, but be sure to not offer it any food.”

Conlee noted that intentionally feeding bears can be dangerous as it makes the bears comfortable around people. It can also lead bears to cause significant damage to property while searching for a meal.

“When bears lose their fear of humans, they could approach people in search of food or may defend the food sources or territory they associate with people, which can make them dangerous,” Conlee said. “When this happens, the bear cannot be relocated and has to be destroyed. A fed bear is a dead bear.”

Food is usually a bear’s main motivator, but that also means it can be a main source of conflict. MDC offers the following tips to avoid attracting black bears to possible food sources:

•  Store garbage, recyclables, and compost inside a secure building or in a bear-proof container until trash pick-up day.

•  Keep grills and smokers clean and store them inside.

•  Don’t leave pet food outside. Feed pets a portion at each meal and remove the empty containers.

•  Refrain from using birdfeeders in bear country from April through November. If in use, hang them at least 10 feet high and 4 feet away from any structure. Keep in mind that even if a bear cannot get to the birdseed, the scent could still attract it to the area.

•  Use electric fencing to keep bears away from beehives, chicken coops, vegetable gardens, orchards, and other potential food sources.

•  Keep campsites clean and store all food, toiletries and trash in a secure vehicle or strung high between two trees. Do not keep food or toiletries in a tent, and do not burn or bury garbage or food waste.

While black bears are generally a shy, non-aggressive species and bear attacks are rare, MDC offers these tips when outdoors in bear country:

•  Make noise, such as clapping, singing or talking loudly, while hiking to prevent surprising a bear.

•  Travel in a group if possible.

•  Be aware of the surroundings. If there is evidence of a bear, such as tracks or scat, avoid the area.

•  Leave bears alone! Do not approach them, and make sure they have an escape route.

For more information on Missouri black bears and how to Be Bear Aware, visit mdc.mo.gov/bearaware. 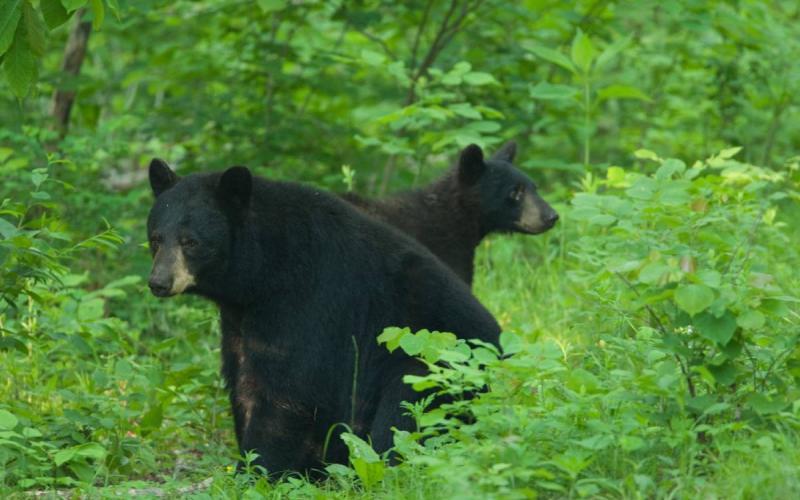 MDC reminds Missourians to “Be Bear Aware” and remove bear attractants from their properties, such as
bird feeders, trash, barbeque grills, pet food, and food waste because a “fed bear is a dead bear.”