Thanks to All Who Supported the Journey for Charity Tractor Cruise

Thanks to All Who Supported the Journey for Charity Tractor Cruise

The 13th Annual Knights of Columbus Journey for Charity Tractor Cruise was held on Sunday September 13.  This was the second year a group of tractors rolled along the 30 mile “Northern Route” from Concord Hill through Marthasville, Dutzow, Augusta and into Washington. 52 tractors left Concord Hill around 10 a.m. and joined up with 123 “Southern Route” tractors from St. Clair at the Mercy Doctor’s Building in Washington.

From there, all the tractors traveled through Washington to the Washington KofC grounds. There the spectators were able to see the tractors on display and enjoy some bar-be-que. Over 400 bar-be-qued pork steaks and 150 hot dogs were served. There was also a kids pedal tractor pull, in which around 60 children participated

During the event approximately 3800 lbs of food was collected along the two routes and  distributed to 7 local food pantries Sunday evening, including the Southern Warren and St. Charles County Food Pantry located at Charrette Baptist Church in Marthasville. Proceeds and donations from the event are still being collected and counted and is currently around $27,000.  This will also be distributed to the 7 local food pantries in October.

The seven area Knights of Columbus Councils from St. Clair #4667, St. John’s #8073, Dutzow #1927, Washington #1121, Union #1576, New Haven #7475 and Krakow #16213 would like to thank the businesses and individuals who supported the event this year.  Also a thank you to the Missouri Highway Patrol, the Franklin County Sheriff’s Department, the Warren County Sheriff’s Department, the St. Charles County Police Department and the Washington Police Department for escorting the tractors along the routes.

The 14th Annual Knights of Columbus Journey for Charity Tractor Cruise is tentatively planned for September 12, 2021. 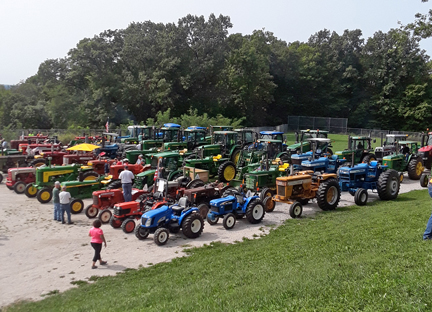 There were 52 tractors that participated in the "northern" route - taking a break
here at St. Vincent's Church in Dutzow. 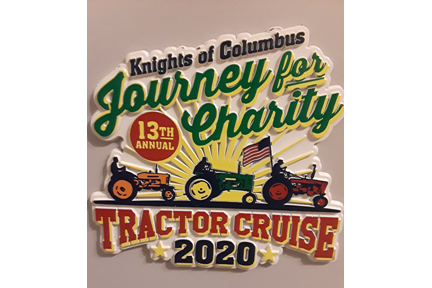