On August 30, 2020, a new “Welcome to New Melle” sign was installed in the wedge at the intersection of Hwys. D and Z in New Melle. The Eagle Scout project was coordinated by Cyrus Hunter, a member of Boy Scout Troop 856, New Melle.

Cyrus said he first got the idea to rebuild the sign in the spring of 2019 after talking with a local resident who noticed that the sign was falling apart. He then contacted the New Melle Chamber of Commerce to see if they were open to the idea of having their sign rebuilt as an Eagle project. After receiving approval from the Chamber of Commerce, Cyrus put together a proposal for the local scout council explaining the project, what it encompassed, and how he was going to show leadership throughout the project. The council approved his proposal and plans were finalized by January of 2020.

Cyrus said, “To begin the actual project, I had a sign shop make the new sign out of high-density urethane. For cost considerations, I led scouts in painting the new sign rather than having the sign shop do it. Then in March of 2020 the Covid-19 pandemic came in full force and Scouts BSA shut down all in person meetings. This was in effect for about four months before we received guidance on how to meet safely. When I received the greenlight to begin work again, with precautions in regard to keeping people safe, I chose August 30th to remove the old sign and replace it with the new sign.”

The work day came and in three hours 15 volunteers, largely composed of Troop 856, were able to remove the old sign and rotten posts and completely replace them with the new posts and signs. Completing a project like this is one of the requirements for the Eagle scout rank.

Now that the construction is complete, there a few documentation requirements to submit, but Cyrus is hoping to earn the Eagle Scout rank by the end of this year.

Thank you from New Melle Chamber of Commerce

On behalf of the New Melle Chamber of Commerce members as well as the surrounding community, we would like to thank Cyrus for his efforts in leading this project.  He was a true professional at every step along the way and overcame many obstacles.  His hard work will leave a lasting impression on passersby for decades to come.  We hope you will take notice of his work the next time you are through town. 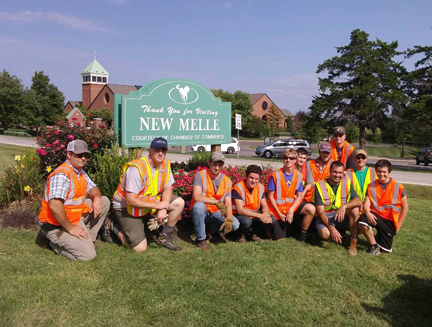 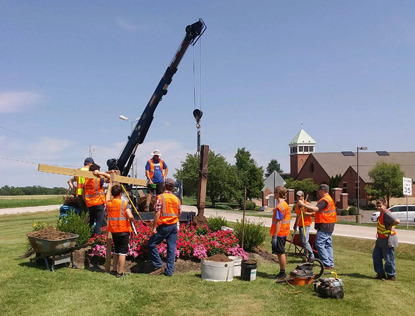 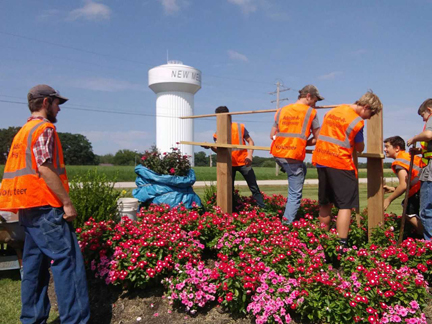 Squaring up the posts for the new sign. Cyrus Hunter (far left.)