A new Boone-Duden Heritage Trail sign was installed in mid-September in the corner of the Augusta Town Square by members of the Boone-Duden Historical Society Board, with assistance from Augusta Fire Dept. volunteers who provided the equipment to dig holes and raise up the sign.

The sign is green with white lettering similar to all the other heritage signs. This is the 11th sign in the Heritage Driving Tour collection.  Each sign marks the location and tells the story of an early settlement (some of which have disappeared over the years.)

Augusta (Mt. Pleasant)
The river landing was a popular Indian trail, and a campsite for French fur traders. Leonard Harold, follower of Daniel Boone, came from Virginia to Missouri in the late 1700s and settled the river front area that would later become Augusta.
•    1812 - War of 1812, Harold served in the war.
•    1814 - Harold served in the Missouri Territory Mounted Militia. In the campaign against Miami Indians. Commander was Lt. Col. Daniel Morgan Boone.
•    1821 - Harold acquired 360 acres of land, including a licensed boat landing, through a grant for service in the War of 1812.
•    1835 - Harold built a two-story log house on the northwest side of his property. 1836 - Mt. Pleasant was registered as a settlement with St. Charles County.
•    1840 - Located in the initial twenty-one lots was Mindrop Store/Saloon, Wencher-Tiemann Holtmann/Jeude House, Baare-Weidner Store, and Baare-Dammann House.
•    Julius Mallinckrodt was one of the first settlers establishing vineyards.
•    1843 - Mt. Pleasant was renamed Augusta.
•    1844 - Harold set aside three blocks to the western side of his settlement, to include space for a public school.
•    1867 - Augusta Wine Company built a brick Wine Hall on Locust Street.
•    1870s - Missouri River changed course; Augusta no longer had a waterfront.
•    1980 - Named the first U.S. Wine District.

Boone-Duden is a 501C3 not-for-profit.  All the Heritage signs were funded by donations. 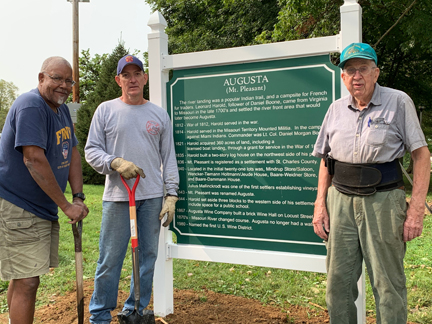 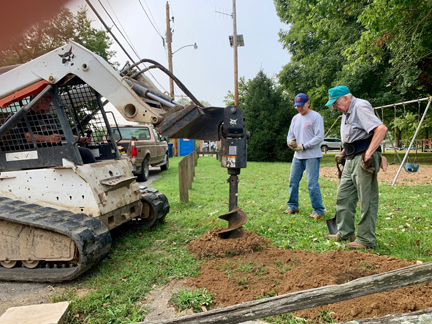 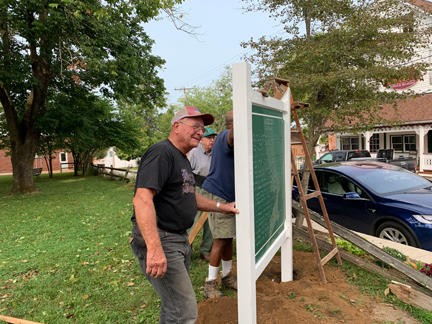