The New Melle Fire Protection District officially has a new Fire Chief, Dan Casey, effective October 1, 2020. Casey replaces Rick Massey who joined the district as a volunteer in 1980 and has served as Chief since 2005.

Massey announced his intention to retire at the district’s annual awards ceremony last March. As part of that announcement, Massey said, “I know that a change in leadership will bring new excitement to the district, new ideas, and new enthusiasm to carry the district forward into the future.”

In selecting Dan Casey, it appears the board has chosen a candidate that can do just that. Casey is enthusiastic, community-minded, and comes with a wealth of experience working in EMS and Fire Suppression.

Casey joined the St. Charles County Fire Protection District as a volunteer when he was 18 years old. He joined the Air National Guard at age 20, and worked as a Civilian Technician at Lambert Airport for the Guard for several years. He continued to volunteer while earning his EMT and Paramedic licenses, and completing Firefighter I and Firefighter II certifications.

Casey joined the City of St. Charles Fire Department as a paid firefighter in 1998, and over the years held the positions of Captain, Battalion Chief/Paramedic, Public Information Officer, and Acting Deputy Chief. In 2018, he was recruited for the position of Fire Chief for the Lincoln County Fire Protection District.

Casey is also a Lead Instructor for the St. Charles County Fire Academy, and developed a “Near Miss” training class called “Overhaul the Fireball” which he and a colleague teach to first responders across the U.S. Additionally, Casey serves on the FEMA Missouri Urban Search and Rescue Task Force and holds numerous industry related certifications. Casey joined the NMFPD in April, going back “on the truck” while an employee was out on sick leave. He assumed the position of Assistant Chief in July, then officially became Chief on October 1. The NMFPD board of directors has tasked Casey with preparing the district for the future.

Casey also met with each firefighter, paid and volunteer, to get their input and ask the question, “Where do you see yourself and the department in 10 years?” So together with firefighters and board of directors, needs have been identified and prioritized, and an organized plan has been laid out with specific goals for 1 year, 5 years, and 10 years. One of the biggest needs is upgrading facilities. All three stations in the district were built as volunteer stations. Station one has been remodeled to accommodate paid, 24-hour staff, but the sleeping rooms are in the basement which is not ideal.

There is a lot of growth coming along Hwy. DD and the Hopewell/Diehr Road area, which are part of the district. There is a station at D and DD, but it is unmanned. One of the “sooner rather than later” goals is to get a paid crew at that station to improve response time in that area, but the building needs to be expanded before that can happen. There are also OSHA and other occupational concerns for firefighters. Certain cancers have been linked to job related exposures, and most new stations are being built to accommodate a “dirty” (or contaminated) area, separate from a “clean” area, to reduce exposures to toxins.

Some other needs that have been identified include new brush trucks and a boat. The New Melle Fire District is the largest district by area in the county (121 square miles) and has the most bodies of water, but the department relies on borrowing private boats (or waiting for another department) to respond to any water incidents.
Community is also very important to Casey. He’s big on building relationships and interacting with people. “We’re here to serve. That’s our job, and it’s one of the things we love most about it. Let’s face it. We usually see people when they are not at their best. If they have called us, something’s gone wrong in their life and they are upset. Our job is to help them. And we want to do that to the best of our ability.”

Working together with the firefighters and the board, Casey has helped the department develop a new mission statement: “Putting Community F.I.R.S.T. — Family, Integrity, Respect, Service, and Tradition.”

A list of core values has also been defined:
•    Integrity – Doing the right thing, even if it is not acknowledged by others. Honest adherence to a sound moral code.
•    Teamwork – Collaborative effort to achieve a common goal in the most effective and efficient way.
•    Loyalty – Reliable and true. Faithful and devoted.
•    Compassion – Sympathy and concern for the suffering of others with a desire to alleviate it.
•    Community – Fellowship with others, having common beliefs, attitudes, interests, needs, and goals.

Increased training, and recruiting more volunteers are also goals on Casey’s list, as well as improving the ISO rating for the district, which he thinks will happen next year. (An improved ISO rating can save people money on home owner’s insurance.)

Most importantly, Casey is dedicated to his profession and loves passing on that respect and dedication to firefighters coming up through the ranks. “I think being a firefighter is the best job in the world,” he said. “And most of us in this profession do it because we are called to serve. So I tell the younger ones, ‘Honor the tradition. Live up to the trust and responsibility and positivity that your community expects.’”

Chief Casey can be reached at New Melle Station #1 during normal office hours, 636-828-5528. For more information about the department, visit www.newmellefire.org and follow New Melle Fire Protection District on Facebook. 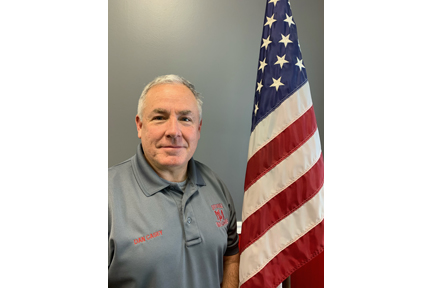