Sunday October 4, 2020 Boone-Duden Historical Society had its 4th annual cemetery tour, which this year was at St. John’s UCC in Cappeln, MO.

Wearing masks and socially distancing, about 30 people walked among the gravesites and tombstones to hear costumed volunteer reenactors tell stories next to the marker where their characters were buried.  Many markers were in German.

This cemetery holds some of the earliest German immigrants to mid-Missouri. Often they were the followers of Gottfried Duden who in the early 19th century wrote journals and letters back to Germany from his place near Dutzow. Duden’s letters help spur hundreds of German immigrants to come to the U.S. seeking freedom of religion, freedom from conscription into the army, a better life, and land. Sometimes whole families settled in an area and purchased land next to one another. A section near Cappeln was called Niewigville because so many people of the same surname related to each other bought land there.  The Germans came for land and opportunity—sometimes chartering an entire ship to bring their group of family, friends and neighbors.

The surnames of characters whose stories were told at the cemetery tour are well known in the area.  In many cases, the persons playing the character were descendents of the character whose story they told.

Some of the characters wore accessories and period costumes that had belonged to their characters, including shawls, bonnets and aprons.  Characters also brought ships manifests of their ancestors’ passage to America and photos of their ancestors and where they lived.
Many were born in Germany, came to this area called Cappeln near New Melle, became farmers, shopkeepers, whiskey distillers, preachers, soldiers and then were buried in this well-ordered cemetery. 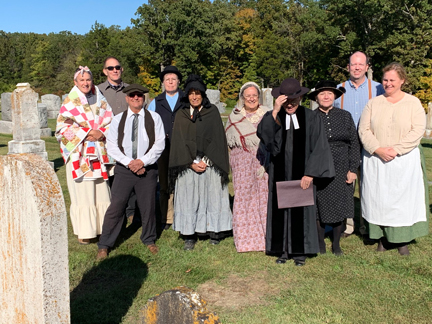 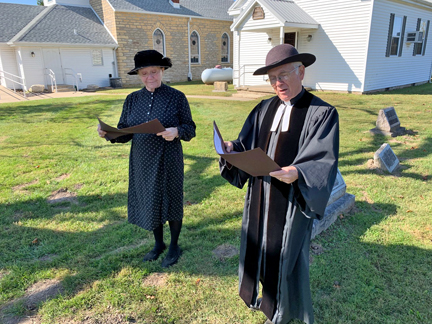 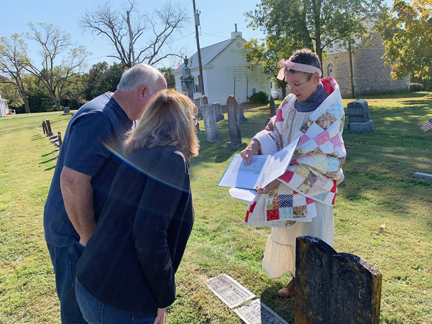