Clayton Wood said, “2020 couldn’t have been any better for me,” after getting two trophy deer this fall. The first was a 12-point buck he killed during bow season in October.

He was brimming with excitement, posting on Facebook the next day, “I’m still on cloud 9....Words can’t describe the feeling of laying hands, not only on my first buck ever, but a stud of one. This is what it’s all about.”

Then, just seven weeks later, Clayton got a definite “once in a lifetime” opportunity – an 18 pointer that he’d been scouting for 2-1/2 years!

Clayton is not a casual deer hunter. He spends countless hours year-round scouting, in person and via wildlife cameras, watching for specific deer and logging their patterns and habitats.

Clayton said, “I like to keep tabs on the older ones, giving them each a name for recordkeeping. I drive around and scan fields, and hunt for sheds [antlers that have been shed.]” In the past few years, Clayton has collected four sets of antlers from people who found them nearby that he believes came from the 18-pointer, which he named “Splitter” due a specific trait of his rack. Clayton said most deer have their own unique style of rack, and there are usually similarities from year to year.

Deer have different habitat patterns in the summer and winter. This summer, for the first time, Clayton spotted both the 12 and 18 pointer several times on property where he hunts.

About the 18-pointer, Clayton said, “Knowing I needed to pattern him, I was out there almost every night with my spotting scope doing that. I had him down all the way till Sept. 10th, 5 days before bow season. Then the acorns started falling like crazy and he disappeared. Then 2 days before rifle season he popped up on one of my cameras in the middle of the night; and then he showed up again once during the season. I had an idea, after talking to some people, where he was living. On Sunday, Nov. 22nd this giant hit the ground! I had 8 does come out 200 yards away and was just waiting for a buck to come out behind them. Next thing I know, I look back to my right and there is Splitter, 40 yards, broad side. I swing over that way, confirmed it was him, and the rest is history.”

But there’s more to this story than just a once-in-a-lifetime deer. Clayton is a paraplegic. He was injured in a motorcycle accident in 2010 and is paralyzed from the waist down. Clayton said, “I don’t let that stop me. I do whatever other people do.” Clayton is completely self-sufficient. He works as an insurance agent by day, and enjoys hunting, fishing and boating in his spare time. An Action Trackchair® gives him the freedom to go off the beaten path. “That chair is truly a blessing,” he said “It has tracks, an 8-10 mile range, and allows me to go just about anywhere I want to go.”

Since the beginning of his paralysis, Clayton has had the attitude that he’s lucky to be alive, so he hasn’t let his challenges stop him from doing what he loves. Clayton said, I always say, “Believe the impossible. Live day by day. Keep your head up, and be happy. It’s not always easy, but just keep going.” (Great advice for all of us.)

Congratulations Clayton— on all your accomplishments! 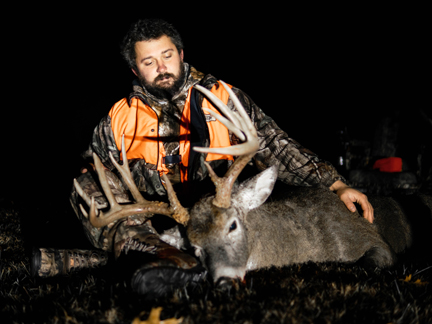 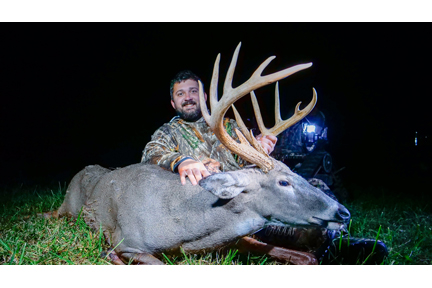 Clayton Wood with his first buck ever, a 12-pointer he got in bow season.