The St. Charles County Parks and Recreation Department continues to offer the public the nation's best when it comes to bridging the past to the future through historic first-person interpretation. For a third year in a row, an outstanding volunteer at The Historic Daniel Boone Home in Defiance has received national recognition as a leader in historic interpretation, bringing history to life. 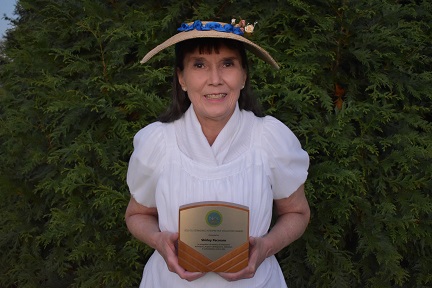 Congratulations to longtime St. Charles County Parks volunteer Colonel Shirley Pecoraro, Certified Interpretive Guide (CIG) at the Boone Home, who recently received the National Association for Interpretation (NAI) 2020 Outstanding Interpretive Volunteer Award, the highest honor in interpretation. This prestigious award recognizes mastery of interpretive techniques, program development and dedication to interpretation. According to NAI, which serves over 7,400 members in the United States and more than 31 nations, this exclusive award comes during the most competitive year to date, with more nominations being received than any previous year.

"Shirley’s achievements in front-line interpretation at The Historic Daniel Boone Home have been more than impressive," says Ryan Graham, Director of St. Charles County Parks. "Her long-term commitment to living history, ability to portray multiple first-person characters at our historic site, and extensive knowledge and passion to teach interpretation have made a lasting impression on many visitors over the past 13 years."

Since 2007, Shirley has been a dedicated volunteer, donating hundreds of hours to serving as an advocate for historical and cultural preservation at the popular site listed on the Register of Historic Places. She brings the legacy and era of the Boone family to life through her portrayal of Rebecca Boone, 18th century frontierswoman and wife of Daniel Boone. She was presented with the 2016 Outstanding Volunteer Award by St. Charles County Parks in recognition of her dedication and years of volunteer service.

Shirley has been a member of NAI since 2008 and is a lifetime member of The Association of Missouri Interpreters. In 2008, she completed the second CIG class offered at The Historic Daniel Boone Home site and has been recognized by the Governor of Kentucky for her portrayal of Rebecca Boone. Her service as a goodwill ambassador to the visiting public and community led to her being a commissioned Kentucky Colonel, the highest honor a Governor from Kentucky can bestow, and one of a number of honorary titles of colonel conferred by U.S. states.

For more information about volunteering with St. Charles County Parks, or to schedule a tour of the Boone Home, located at 1868 Highway F in Defiance, to experience these award-winning volunteer performances, visit stccparks.org or call the park at 636-798-2005.