The Greater Warren County Economic Development Council (GWCEDC) annually honors those companies and individuals who have made a positive impact on Warren County and its residents. They have presented the 2019-2020 Entrepreneurship Award to Carl Bolm, the proprietor of Cedar Lake Cellars.

Opened in 2010, Cedar Lake Cellars has grown to become one of the most popular event venues in the Midwest. The winery hosts weddings, private events, corporate retreats, and a variety of signature events that annually attract thousands of visitors to Warren County.

Steve Etcher is the economic development consultant for the EDC and a manager at MarksNelson. “The EDC each year recognizes key individuals and businesses that contribute to the economic health of our community. One of those awards is the Entrepreneur Award. We believe that entrepreneurship is a foundation for our economic health. It requires a lot of dedication, vision, determination, and most importantly passion. We have seen those traits exhibited by Carl in his approach to developing Cedar Lake Cellars, and that is why we want to recognize him with this award.”

Carl Bolm could have built the winery and event venue anywhere in the Midwest but chose a location just down the road from where he was born and raised. “I’m honored, humbled, and surprised. Cedar Lake Cellars has been a passion for myself, my wife, and all of the staff who have worked so hard to build this here in Warren County. We started with nothing but an idea and a dream. We knew we needed to be an attraction to get people here first, and then a destination that fulfills and exceeds their expectations so they would return.”

The fact that Carl is a Warren County native also resonates with the EDC. “Absolutely, we want to recognize the fact that he chose to pursue his passion here locally, and we want to recognize and support that effort,” said Etcher. “We also want to encourage the next generation of entrepreneurs to know that their passions can be realized right here in the greater Warren County area.”

The EDC also recognizes the positive economic impact the winery has on the local economy. “Sales tax generation funds a lot of key community services, so it’s important to recognize those that provide that ongoing support to keep our community growing and attractive to those who visit and live here,” added Etcher. “Cedar Lake Cellars is a very significant contributor to the tax revenue that supports our community.”

That impact will continue to grow as Cedar Lake Cellars continues to grow. “We’ve had more than 120,000 guests this year, and we’re excited about the future,” shared Bolm. “This award is really for all the staff and everyone who has put in so many hours. I’m blessed to work with passionate people that make this experience what it is, so people keep coming back to Warren County!” 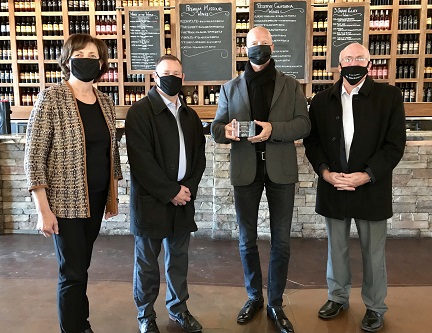 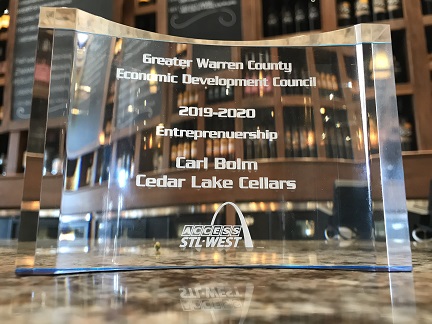