Erin Cubbie Cox is no stranger to organizing quick and impactful fundraisers. Last Spring she spearheaded a campaign to sell T-shirts to benefit local restaurants struggling because of the pandemic.

For several years, she’s organized a toy drive at Christmas. But this year, her heart was pulled in a different direction.

A friend who works at the Villages of St. Peters nursing home, posted on Facebook that they needed help filling wishes on their giving tree. Erin put out a quick query on Facebook on December 6th: “If I were to put together an Amazon wish list to make sure every resident got something (even if it's just a new pair of slippers, a book, a puzzle, etc.) would anyone be willing to give to this initiative?”

Response was so quick, the Amazon gift list was filled within 24 hours! And people kept giving! So Erin reached out to another friend, a chef at Aberdeen Heights in St. Louis. This small home had been hard hit by the virus and was under a “super lockdown”. A care package for each resident would be truly appreciated, so Erin put the word out on Facebook again: “Would anyone be willing to donate a Christmas Care Package consisting of a fleece blanket ($8) a word search ($4) an adult coloring book ($3) and non-slip socks ($8)?”

There were 26 residents, but Erin received way more than she needed. Besides the specific items listed on Amazon, people went shopping and dropped off items they purchased in person, and/or donated cash, candy and snacks and more. So Erin reached out to Caregivers Inn in O’Fallon, and 30 more residents were added to the list.

And still the donations kept coming

Then a friend in Kansas City told Erin about Benton House, where her mother and other Alzheimer’s patients were confined to their rooms, crying, lonely and confused, unable to understand why they were in lockdown. It broke Erin’s heart, so Erin assembled care packages for them too – and her friend drove here, picked them up, and delivered them back to the residents in Kansas City.

In addition to asking for donations, Erin had also asked if anyone would be willing to make or sign cards to put in the packages – just to let the residents know they hadn’t been forgotten. She got cards from girl scout troops, classrooms at Daniel Boone School, 4-H clubs, and individual families – enough to put multiple cards in each package!

On December 17th, an enthusiastic group of volunteers met at the Activity Center at NMSR and assembled the packages, which were delivered by Erin and other volunteers within the next few days, making Christmas a little brighter for over 175 nursing home residents!

Once the assembly effort was completed, left over items like gloves, socks and blankets were donated to Street People of St. Louis, a non-profit that helps homeless people who cannot go to shelters because of pets or mental health issues. Other excess items, like books, soaps, and candy were donated to Our Lady’s Inn in Defiance.

But the story doesn’t end there.

While this was going on, Erin saw a posting from a local mom in Wentzville that had fallen on hard times and was asking for a little help to provide Christmas gifts for her kids. Once again, Erin put the word out to the community, and the response was overwhelming. Over 700 items (clothes, toys and more) were collected and donated to that family!

Three Christmas dinners were also purchased and delivered, along with care packages, to area women who were spending Christmas alone.

Additionally, a local resident donated a handmade afghan that had special sentimental value, asking Erin to find someone that could really benefit from it. For that, Erin contacted an old friend and former St. Louis Radio personality, Spencer Graves. Graves is now in Atlanta and an active Alzheimer’s awareness advocate and spokesperson. His mom suffers from the disease and resides at a Woodhaven Nursing Home in Virginia. The afghan was sent to Graves’ mother, with instructions that when she passes, the afghan stay at the facility and be passed on to other residents to use as needed.

Erin said she is super proud and indelibly touched by the whole experience. “It was definitely the highlight of what has been a crazy year, and it restored my faith that the world is still a wonderful place.” It was amazing how quickly it all happened, and how far-reaching it became. “I didn’t plan this,” she said. “My plan was 40 gifts for one place. And it turned into this amazing thing, with thousands of dollars in donations. And I didn’t do it alone. It worked because everyone was willing to help.”

Erin said people were so supportive and so excited, they want to do it again next year. So Erin plans to set up a non-profit organization called “My Back Porch” – because so many packages piled up there this year that her Amazon driver actually initiated a wellness check for her!

“This all happened in a matter of two weeks,” she said. “What will we accomplish next year if we start in September?”

In wrapping up the event and thanking all who participated, Erin created a slide show set to music with photos that captured steps along the way, including some of the happy faces of the recipients. It is a heartwarming culmination to an incredible, heartwarming community accomplishment. Watch it at: https://www.facebook.com/erin.c.cox.7/videos/10223590123557078 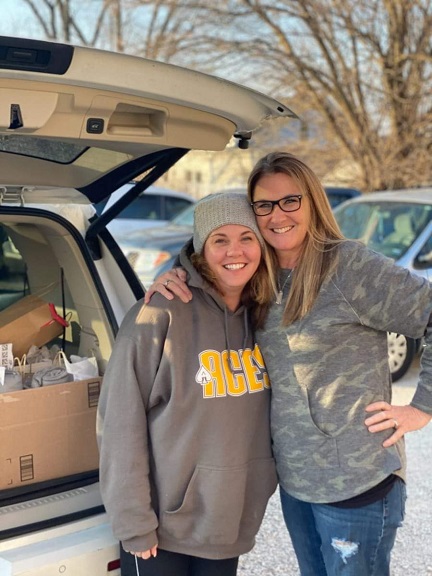 Erin Cox (left) and her friend Cindy, from Kansas City. 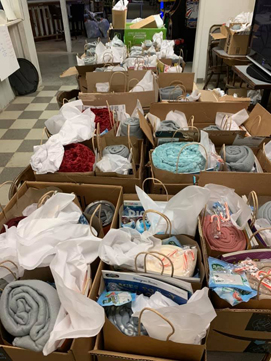 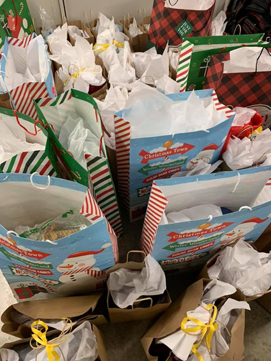 Care packages for residents at Aberdeen Heights
and other nursing homes.
Photo courtesy of Julia Welge.

Santa with some of the happy recipients at the
Villages of St. Peters. 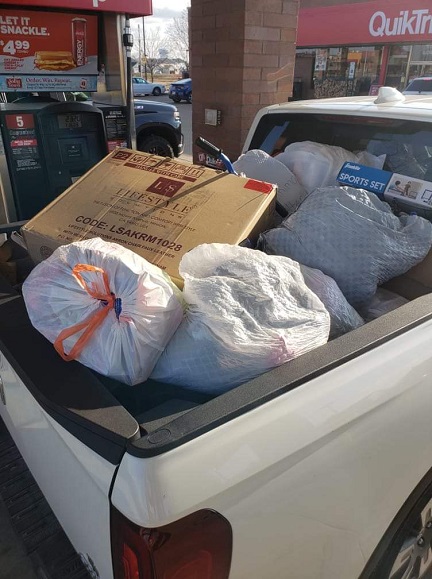 Donations for the family in need. 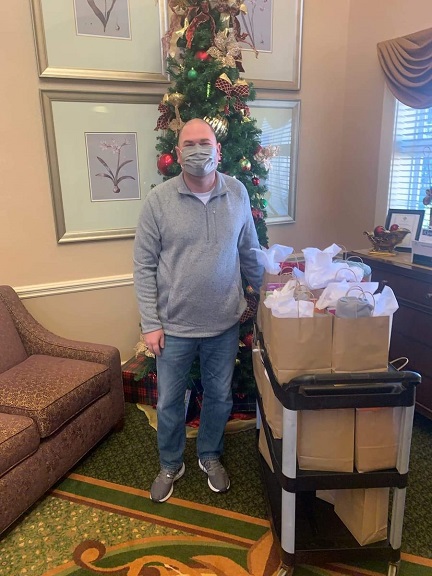 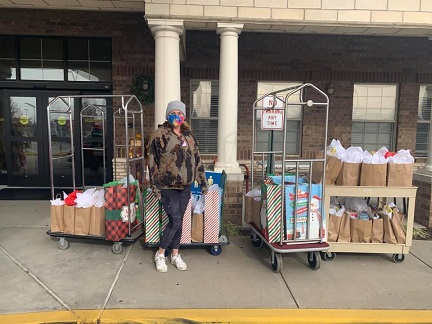 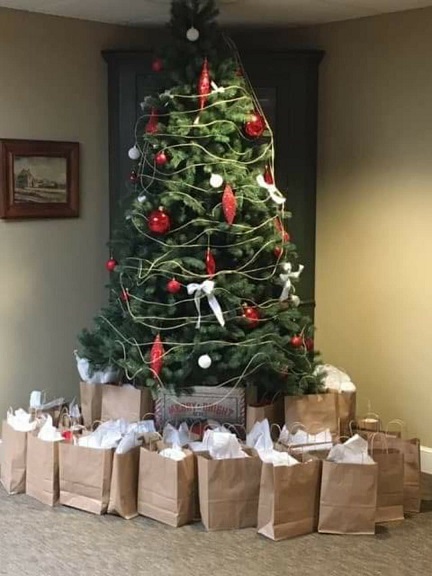