David and Jerri (Noelke) Hoffmann, owners of The Hoffmann Family of Companies, and natives of Washington, MO, have been working to acquire properties in the Augusta area since October, 2020. 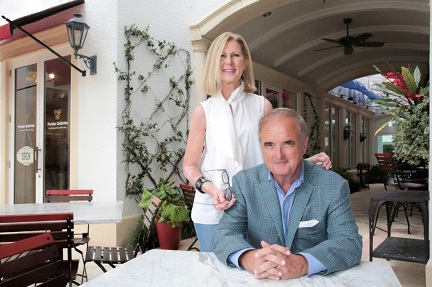 The properties acquired to date include the 90-acre Balducci Vineyards and Winery on Hwy. 94, a 53-acre vineyard with a few small buildings at the corner of Hwy. 94 and Jackson Street, the Old Augusta Wine Hall on Walnut Street, the old feed store at 225 Jackson Street, the old livery building at 219 Jackson Street, and a vacant lot on Locust Street. Additional properties expected to close in late January or February include the Augusta Emporium Building at the corner of Jackson and Walnut, two additional undisclosed wineries, and 250 acres off Hwy. 94 in Augusta. Discussions are ongoing for additional wineries and properties.

In total, the Hoffmanns plan to acquire about 700 acres, consolidate the wineries, expand distribution of the wines nationally, and create a national vineyard destination similar to Napa Valley.

The Greater Augusta Chamber of Commerce hosted a community meeting on January 18, 2021 which David and Jerri Hoffmann attended virtually via Zoom. They gave an overview of their plans and accepted questions from the public.

David told the crowd, “We’re excited to be here. We have lived all over the country but have always been Missourians at heart.” He said “We had always thought about the Augusta area and how beautiful it was. When we decided to come back to Missouri and buy a home, we embarked on this plan to consolidate and improve upon what’s here.”

Plans include providing horse and carriage rides based at the old livery building on Jackson, as well as wagon rides through the vineyards, a trolley service to provide transportation around the town and surrounding areas, restaurants, a small public golf course, a 50-90 room hotel and other types of attractions. The trolley service would interconnect with busses/vans/limousines to coordinate transportation to, from, and throughout the area.

There are also plans for operating a paddleboat on the Missouri River, perhaps two, that would travel between Augusta and Washington. At this time, Hoffmann hopes to dock the paddleboat straight out from the Augusta ballpark, with some sort of transportation across the bottoms between the trail head and the River.

Hoffman said this will be the fourth time they have rebuilt a down town. He wanted to be clear, “We are not developers. We have never ripped a building down, ever, for any reason. We are restorers. One of the things that attracted us to Augusta is its history, traditions and culture. The last thing we want to do is change that.”

Hoffmann said “We want to bring the Augusta Wine Hall back to its original look and really make that a focal point of the community, along with the feed store and silo there, and the livery. Hoffmann wants the feed store to be a general store, and would like to put a gasoline pump in town, “But you won’t see us put in a ‘711’ type gas station store anywhere in Augusta. It would not be in keeping with the area.”

Jerri Hoffmann said the character of the town is one of the things they found most appealing, “The rich history that’s there, the small town feeling, and the community. We truly value that and hope to maintain that.”

David added, “We have renovated over 100 buildings across the US and have never torn one down and built anything new. The hotel structure that we’re planning will be the first time we’ve ever built anything from scratch.” Hoffmann said “When we get all through with our planning, you’ll see that our architecture is going to blend in very well.”

Hoffmann said the community would start seeing some activity in the near future, including restoration work, the arrival of trolleys, a horse and buggy, wagons, and four 1950's fully restored Chevrolet pick-up trucks. “They are on their way now,” Hoffmann said. “We tell people you can expect your buildings to look as authentically restored as those trucks.” 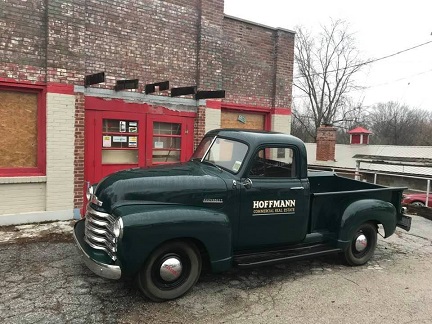 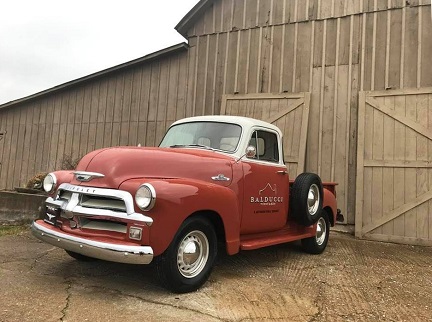 Hoffmann answered questions that the community had submitted prior to the meeting about infrastructure in town. Hoffmann said they would address those types of things as needed as things progress. He said he anticipated that some of the larger events they were planning would take place on the outskirts of town.

When asked if the Hoffmann group would work synergistically with the surrounding wineries, David replied, “Absolutely, we endorse competition. Our trolley services will serve other wineries and businesses in the area, not just those owned by the Hoffmann group.”

Hoffmann said, “Some of the local vineyard and winery owners, while they’ve been supportive of our plans, are very concerned about what happens to the area. They really grilled us on what are we going to do because they feel such a strong commitment to the Augusta community and surrounding area, and they want to leave their investments in the right kind of hands. And we’re fortunate that they believe us to be those right kind of hands.”

Hoffmann said, “Our family of companies owns over 50 businesses. We never sell anything. It is not our plan to come into Augusta and fix it up and sell it. We live in the communities that we are invested in. And we participate and like to bring to those communities a sense of philanthropy,” he said.

The Hoffmanns will be donating public restrooms that will be built on an empty lot on Locust street, and upgrading the playground equipment in the Town Square, because they feel they have that responsibility as a corporate citizen to give back to the communities.

When asked about the time line, Hoffmann said, “At this stage we don’t know. Renovation work is renovation work. It can be timely, or time-consuming. Some restoration work will begin soon. As far as the hotel, that will be awhile. Three years is the goal to have everything done. We’ll see how it goes.”

When asked about what type of restaurants and locations, Hoffmann said he had received calls from across the US from people with roots in this area with interest in a restaurant. He said he liked the farm to table idea. He’d like to see what he calls an “every person’s restaurant, with price points that everyone can afford to things that are more expensive, so I envision a gamut of choices.”

As far as location, Hoffmann said he likes the 2-story brick house on the Balducci property as a potential site for a restaurant. He also likes the Emporium Building and the waterfront area. He thinks the community will be well served with restaurants.

Regarding an amphitheater, Hoffmann said that was an idea that Rick Balducci has had for many years, “He shared those plans with us. We may tweak the size and design, but we do plan to try to move forward with that and bring in concerts and live music.” The Hoffmanns own the Hertz Arena in Florida and have relationships with significant country music performers across the country. Compared to the amphitheater in Chesterfield, Hoffmann said at this point he was thinking something smaller and more intimate.

Regarding the hotel, the location has not been determined. Hoffmann said it could potentially be part of a 30-acre parcel at 94 and Jackson Street. Mrs. Hoffmann likes a different site on a 200 parcel that they plan to purchase in the next two weeks, which is more secluded. Hoffmann said the architecture of the hotel would be in keeping with vibe and architecture of Augusta. They are considering a size of 50 to possibly 90 rooms, and expect it to be busy on weekends only, mostly for wedding guests in the area.

When asked if the Harmonie Verein building and its historical significance to the town had been incorporated into the plans, David said “We do not have a master plan yet, but now that we know it’s significant, we will be sure to incorporate it. History and preservation are critically important to us. We are sensitive to it and it’s part of the appeal.”

Jerri Hoffmann said, “We love the charm of Augusta and we want to keep it.”

Regarding concerns about traffic, noise and outsiders disrupting the quietness of the community, Hoffmann said, “We’re not adding any new wineries, just purchasing what’s existing. Winery owners all said we need a hotel for wedding and corporate events. We do not anticipate a great increase in visitors to the community. The improvement will be in increasing wine distribution nationally. We anticipate that the hotel facility will provide another place to eat, exercise (golf) and cool place to go while you’re in the area for a wedding. We think our plans will enhance the B&B business, not compete with it, because people who stay at B&Bs are looking for that kind of experience.”

Regarding drinking and driving on Hwy. 94 and the impact of increased traffic on volunteer EMS departments, Hoffmann said “Drinking and driving will hopefully improve with the trolley, bus, limo, and fleet services. In terms of volunteer EMS, if we need to enhance emergency systems, we own a global jet emergency service, so I think we’re prepared to address those concerns.”

In closing, Hoffmann said, “We appreciate everyone coming out and your interest in this and your community. We want to be good citizens and think you’ll find we will be. We’re delighted to be there and we hope you help us get some things going with the County. Your voice matters. We appreciate your comments, take them to heart, and will respond accordingly.