You can watch thousands of particles older than the Earth itself come to dramatic and fiery ends before your eyes. That’s essentially what a meteor shower is, and one of the grandest of the year is happening this month.
There’s a lot of things to discover in nature at night, and the Perseid Meteor Shower is one of them. It reaches its peak this year on August 12, but you can see Perseid meteors as much as 10 days before or after the peak. Look for an open, dark sky with no immediate lights to view the show, and if you can, travel as far away from the city as possible. In fact, it’s a pretty good excuse to plan a camping trip the week of the peak and sleep out under the stars. State parks and conservation areas that allow camping can be great places to go.

Lay back and watch the distant fiery streaks as they careen through a sky where our ancient ancestors fancied seeing animals, mythical creatures, kings, queens, hunters, and heroes shaped by the mysterious points of light.

Most of us know those points are far away suns, very much like our own. But what are the shooting stars, or meteors? Most of them are actually very tiny particles of dust left behind by comets that were formed billions of years ago, shortly after our sun was born. These particles enter our atmosphere at high velocities, and friction with the air ignites them into glowing streaks as their journeys meet their fiery destinations.

Annual meteor showers occur because the Earth passes through the orbits of the same comets on its yearly journey around the sun. Each celestial anniversary, our atmosphere sweeps up their remains and that’s what creates meteor showers. The source of the Perseids, for example, is debris left by the Comet Swift-Tuttle. Meteor showers get their name from the point in the sky from which they seem to radiate. The Perseids appear to come out of the constellation Perseus in the northeastern sky.

You don’t need a telescope, or even binoculars, to enjoy the view. The very best tools to watch any meteor shower with are your own two eyes. If you have a piece of camp or lawn furniture that allows you to lay back and recline looking upward, that’s even better. A blanket and pillow on the ground will also do. Thankfully August nights are usually comfortable, but it wouldn’t hurt to have a jacket or blanket to cover with since it can still get cool later into the night. Don’t forget the bug spray too.

During your nocturnal adventure, take time to admire the Milky Way. It happens to be high and bright in the night sky during August. The music of katydids and crickets will provide a soothing soundtrack. You might even hear a distant howl of a coyote or a talkative owl.

Why not experience nature at night this month, and discover the fireworks created by the Perseid Meteor Shower? It’s a stargazer’s yearly gift from the sky. 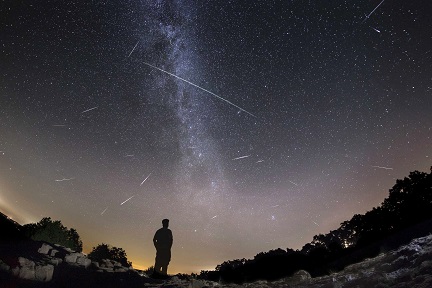 The Perseid Meteor Shower is one of the best of the year,
and it peaks around August 12 this year.
Photo by Dan Zarlenga