Governor Mike Parson and First Lady Teresa Parson visited the Boone Home in Defiance on Wednesday, July 28, 2021, as part of their bicentennial tours – visiting historically significant sites across the state. About 75 people attended and nearly all were personally greeted by the Governor.

William Ray – Lead Interpreter/curator of the Boone Home, talked about Daniel Boone and the influence he and his family members had on the history of our state, including Missouri's journey to statehood. Daniel Boone was 65 years old when he brought his family here from Kentucky. The beautiful limestone home, where Boone spent the last 17 years of his 20-year stay in Missouri, was the home of Boone's youngest son, Nathan Boone. Daniel Boone died in the home in 1820.

Governor Parson remarked how wonderfully this iconic site and its history have been preserved. He said across the state, we have remarkable history to celebrate, and talked about some of the places he and the First Lady had toured (homes of Mark Twain, General John Pershing, Walt Disney and more.) He asked, "Did you know that Missouri is home to the largest Canadian Goose sculpture in the world?" (Look up Maxie the Goose in Sumner, Missouri – the "Wild Goose Capitol of the World.")

Besides the 200th anniversary of Missouri's statehood, this year is also the 150th anniversary of the Governor's Mansion in Jefferson City. Parson said the first official guest at the Mansion was General Armstrong Custer, who stopped by on his way out west; and he said Frank James turned himself into the governor in the room that now houses the library. The Mansion is open to the public for tours and Parson encourages everyone to visit.

On September 18, 2021, the Governor's Office is hosting a Bicentennial Inaugural Parade at 10 a.m. in downtown Jefferson City to showcase Missouri's past, present and future. The parade will celebrate the swearing-in of Missouri's elected officials from this year's Bicentennial Inauguration as well as highlight the history and significance of all 114 counties across the state of Missouri. The Clydesdales will be part of the parade and a WWII Veteran Nurse will be Grand Marshall. The Bicentennial Inaugural Ball will be held that evening (outdoors) at the Missouri State Capitol. For the first time in history, the world champion trophies from the St. Louis Cardinals, St. Louis Blues, Kansas City Royals and Kansas City Chiefs will all be displayed in the same place at the same time on that day. For more details, visit governor.mo.gov as the date draws near. 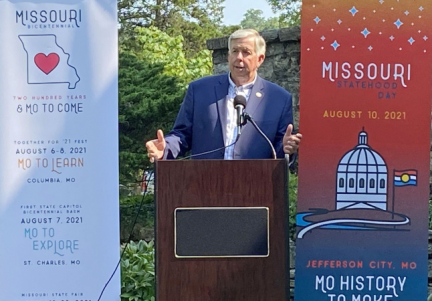 Governor Mike Parson addressed about
75 guests at the Boone Home in Defiance. 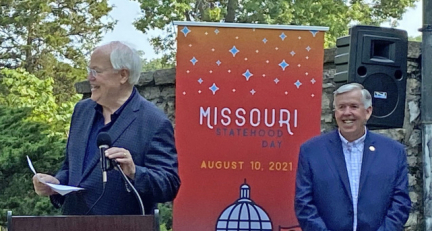 St. Charles County Executive Steve Ehlmann joked as
part of his introduction of the Governor. 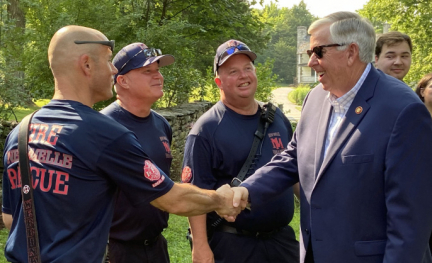 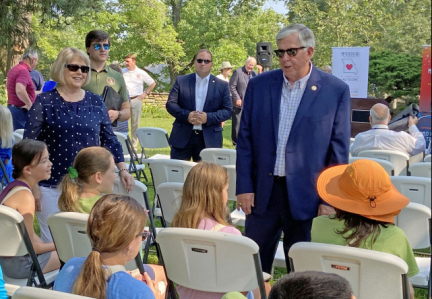 The Governor and First Lady greeted a group of scouts who were working
on a project at the historic site that day.