Published: October 05 2021 | Print | Email | Hits: 1233
Tweet
On Wednesday, Sept. 22, 2021, the Hoffmann Family of Companies unveiled plans for a 12-hole golf course at Balducci Winery, 6601 S. Hwy. 94, Augusta, MO. David Hoffmann said the course will be designed by world-renowned golf course designer Rees Jones, and VP and Senior Designer, Bryce Swanson. Jones has designed or redesigned hundreds of notable courses around the world in preparation for major championships, including U.S. Opens, PGA, Ryder Cups and more. He is the recipient of numerous industry-related awards, including several lifetime commitment/achievement awards. Locally, Jones redesigned the Bellerive PGA Championship Course in St. Louis, and it was through that affiliation that he was approached to take on the Augusta project.

Hoffmann said, “We couldn’t be more thrilled and excited that Rees Jones, Inc. has accepted our project of a 12-hole championship golf course right here in Augusta.”
Jones said, “Bryce and I are extremely pleased to be working with the Hoffmann Family. The golf course will give Augusta another element. Twelve-hole has become the new model for golf courses to speed up the game of golf, like they are doing with baseball. If you want to play 18 holes you can, just play another 6-hole loop.”
Jones said this is a wonderful piece of property that is well-suited for golf. Because of the natural terrain, “We don’t have to move a lot of dirt. He said “The greens will be a little larger than normal, with some low profile, some medium, and maybe a couple of elevated greens. It is going to be a very enjoyable course that everyone can play,” he said.

To make the project happen, some additional land was needed. Hoffmann said they are in final negotiations with neighbors, John and Mary Ann Virant, to acquire additional acreage, “They are great neighbors, great supporters of the game of golf and great friends of ours. Without them, this would not have been possible, so thank you both.”

Bryce Swanson said, “When discussing this project, the main concern was how to build a course that everyone would be interested in playing, with flexibility in each hole to cater to each level of player.”

Hoffmann said the course is made up of long and short Parr 3 and 4’s; hard holes, swing holes and easy birdie holes, which makes for an ebb and flow of the game. There will be lots of tees to choose from at each hole, for every caliber of player. People will practice at the driving range to find out what color tee they should shoot from throughout the course.”

Don Simon, CEO of Missouri Operations, has experience building golf courses and will serve as the project manager. Swanson said the rendering that was presented is pretty accurate but things could change during construction. Simon agreed, saying sometimes golf courses evolve as they are built.

Hoffmann said the course will be open to the public, and there will be some sort of clubhouse included. He hopes to start construction in the spring of 2022 and possibly be ready by the fall.

In other updates, Hoffmann said the “Miss Augusta” riverboat is still on track to set sail in mid-October, the Gas Station on Jackson Street is open with both gas and diesel, and 60,000 bottles of Augusta wine had been shipped to Naples, Florida to be sold at the Hertz Arena, and other Hoffmann-owned businesses there. He said he hoped to also break ground on the Amphitheater at Balducci's next spring as well, and that he has been very pleased with the progress of all the properties in Augusta. 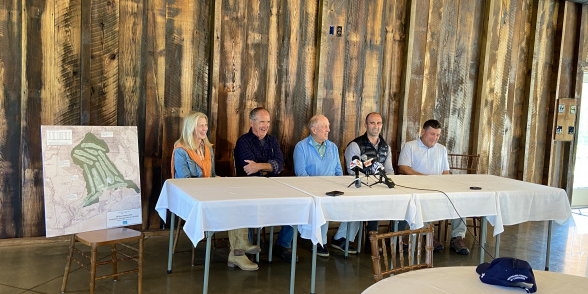 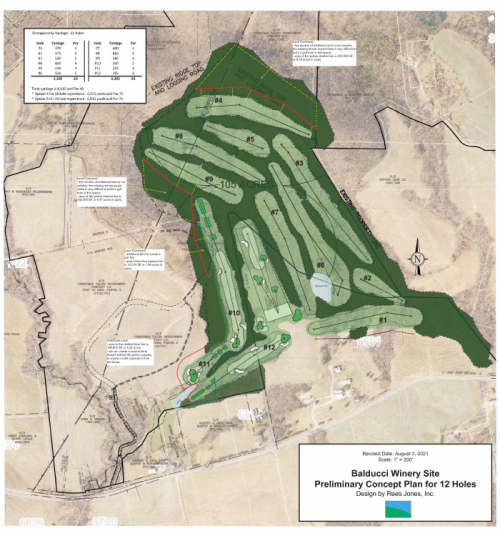