Seven days later, here are some updates on the EF3 tornado that hit the Defiance area Friday night.

On Saturday morning, a request for donations to help the victims was posted on the New Melle 411 Facebook page. Within 15 hours, over $7000 in cash and gift card donations had been collected. By noon on Sunday, nearly $4000 worth of clothing and personal care items had been purchased and sorted and then delivered later that day to the most severely affected families.

By Sunday evening, numerous volunteers had picked up debris, and personal items scattered by the storm, sawed trees and brush, and gathered piles of debris in several area farm fields. White Wolf Pub and Grill had conducted a 50/50 raffle. The raffle winner donated their half of the money back to the cause, for a total of $900.

By Monday afternoon, New Melle Fire Station #1 was inundated with donations of bottled beverages, nonperishable goods, clothing and other items. Additional donations for those types of items had to be declined because the victims are staying in hotels, furnished apartments, or with relatives and have no place to store things.

• $1000 was donated to help with veterinary care for the injured horses and pets.

• Kitchen supplies that were needed at temporary housing for two families were being purchased.

• Money to replace a trampoline and other outdoor toys that flew away in the storm was given to a family with five children.

• Money and gift cards were sent to a family to replace clothes for a child whose closet was ruined.

• Chicken feed was purchased, and straw for bedding was donated for the chickens.

• A special Christmas gift that had been purchased by one of the families but lost in the storm was replaced.

• Christmas gifts were being purchased for at least of the affected children.

• Friedens UCC in New Melle was taking donations for two families in their congregation that were affected by the storm.

• St. Paul’s Lutheran in New Melle is accepting donations for their members who were affected by the storm.

• GoFundMe pages have been set up by family and friends of some of the hardest-hit victims.

By Wednesday morning, a second coordinated cleanup event was organized for Thursday, Friday and Saturday, Dec. 16, 17 and 18, with donated skid steers and operators, and a call for volunteers, to separate metal from wood, continue the tree trimming work, and get the trash to the roadsides for County pickup next week. Volunteer check-in is at Hwy. 94 and Hwy. F starting at 9 a.m. unless posted otherwise on social media.

Cash and gift card donations have continued to flow into New Melle 411 and the organizations listed above. They will be disbursed as future needs arise.

The National Weather Service published the following report about the storm:

“The tornado developed one mile north of the intersection of Highway T and Highway 94 in southwestern St. Charles County around 7:35 p.m. CDT. Two houses had minor damage, and one outbuilding was destroyed. The tornado continued northeast and strengthened as it approached Highway F, northwest of Defiance. Multiple homesteads and farms suffered varying degrees of property damage along Highway F to Highway 94.

Two homes were completely destroyed. The first home was 110 years old and did not appear to have any anchoring to the concrete foundation. The second home just 100 yards east of the first was swept clean to the subfloor, which was still anchored to the concrete foundation. One fatality and two injuries occurred at this location. The damage was rated EF3 with winds to 165 mph.

The storm was rated an EF-3 with 165 mph winds. The total path length was 21 miles, and the maximum width was 100 yards.

Also, a Multi-Agency Resource Center (MARC), coordinated by the Red Cross, is scheduled for Friday, Dec. 17, 4–8 p.m. at St. Paul’s United Church of Christ, 150 Defiance Road in Defiance. Local and state agencies will be on hand to answer questions and provide assistance to those impacted. Those attending should bring proof of residency, and dinner will be served.

MoDot and Volunteers cleanup along Highway F in Defiance.
Photos by Floyd and Kathy Miller 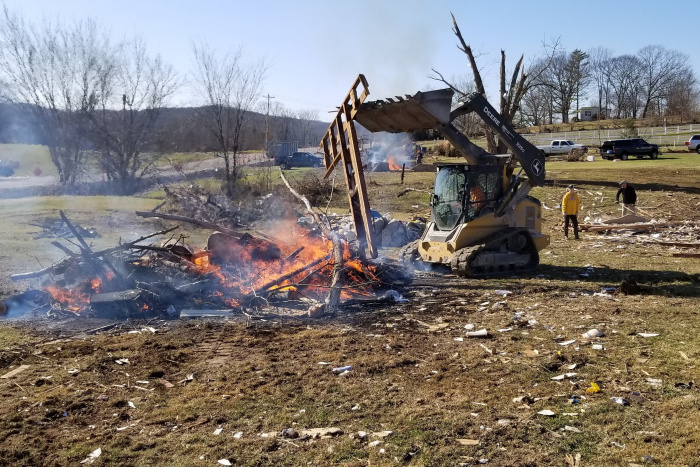 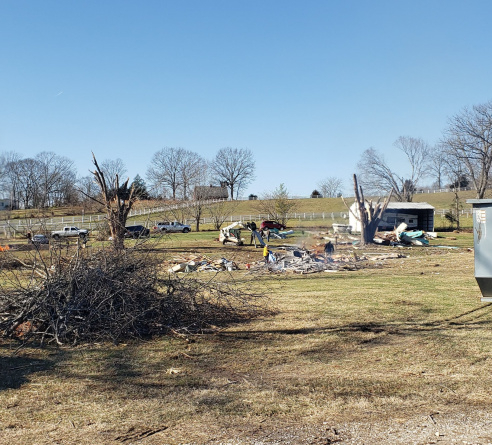 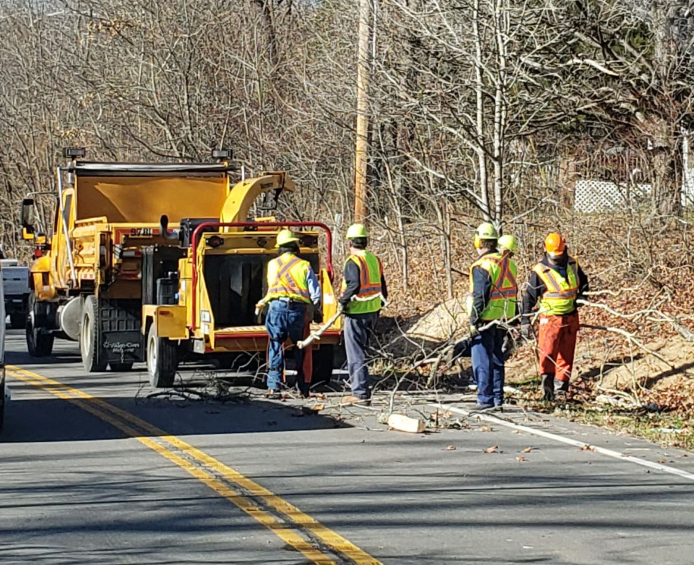