Francis Howell High School Junior, Donnie McCloud, was presented with a “Superintendent’s Certificate” from the Francis Howell School Board on January 20, 2022, for the role that he and the New Melle 411 Facebook page played in the December 2021 Defiance, MO tornado response and relief efforts.

Donnie started the New Melle 411 Facebook page in 2020 as a way for people in the community to connect with one another. It quickly became an effective method to share pertinent news such as road closures, first responder events, lost pets, (bear sightings!) and more. It is also a wonderful tool for local businesses and organizations to promote fundraisers, special events, daily menu offers, etc.

Perhaps the first inkling of just how effective the page could be in terms of communications was the planning and organizing of, in just a few short days, a holiday lights parade in December 2020. The event was so well-received it was immediately deemed to become an annual holiday tradition. A Military Tribute parade was also promoted and organized on the page last August to honor fallen soldier, Lance Corporal Jarod Schmitz of Wentzville, and all active duty and veteran military.

But recently, when the EF3 tornado that hit the Defiance area on December 10, 2021, and a small plane crashed near New Melle on January 8, 2022, New Melle 411 became #1) an important resource for sharing real-time eye witness reports and #2) a vehicle to mobilize community resources: volunteers, donations, etc. in the aftermath.

During his presentation at the FHSD board meeting, FHHS Principal Dr. Dave Wedlock praised Donnie for starting New Melle 411, and for his personal commitment to helping people in need. But Donnie is quick to point out that the immediate and generous response to the tornado, and the success of the New Melle 411 Facebook page in general, lies with the entire community. Particularly with the tornado, there were several key people who played major roles in the hours, days and weeks following that event. New Melle 411 was an effective tool that helped get news and needs out to the community, but it was the people in the community who then responded in amazing ways. And in the case of the plane crash, local first responders used comments from eyewitnesses on New Melle 411 to help define the search area.

When Donnie started New Melle 411, he had no idea it would grow to become what it is, and he’s quick to point out he didn’t do it alone, nor could he continue to do it alone. He’s had help and guidance along the way from dedicated adults who help administer and moderate the page. And everyone who is or has been involved with creating and maintaining the page are volunteers – dedicated to keeping it a trustworthy, respectful, community resource.

When he finishes High School, Donnie plans to pursue a career as an EMT/Paramedic. He said his interest in helping people was sparked in the third grade while his parents provided care in their home for Donnie’s grandfather, who had brain cancer. Witnessing and participating in his grandfather’s care touched Donnie, and from that point forward, he knew he wanted to be a paramedic. He would love to someday work in that capacity here at a local New Melle station.

Congratulations to Donnie on being recognized for his commitment to his community. He’s a bright young man with a bright future. We look forward to seeing him make positive impacts on the lives of others for many years to come.

Editor’s Note: The New Melle 411 Facebook page was launched on January 30, 2020. On February 19, the moderators are planning to celebrate Donnie’s 17th birthday and the second anniversary of New Melle 411. Watch the page for more information as the date nears. 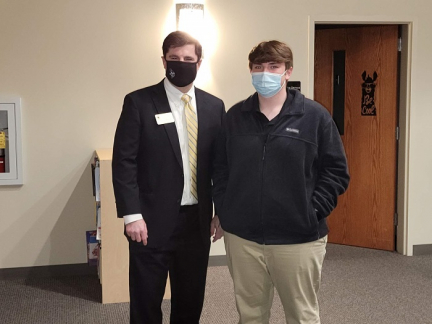 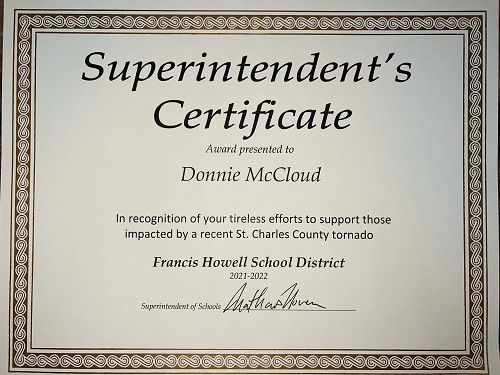