The Dawn of Spring

The Dawn of Spring

March is a very special month; it’s when daytime triumphs overnight. You may have heard that spring officially begins on March 20. But what exactly is so special about that date?

We experience the change of seasons because the Earth we live on is tilted in its orbit around the sun. Due to this 23 ½-degree tilt, as Earth travels around the sun its northern hemisphere is angled toward the sun part of the year, and the opposite half of the year our hemisphere is tilted from it. When slanted away, the sun appears lower in our sky. Its rays are less direct, making temperatures colder. It also rises later and sets earlier, which means our days are shorter. We experience this as winter.

On the flip side, when the northern hemisphere angles inward, the sun rides higher in the sky, bathing us in more direct light, warming the Earth. It’s also rising and setting farther north which graces us with the longer days of summer. Naturally, this all happens opposite for our counterparts in the southern hemisphere.

So, the sun oscillates through the sky year to year in a never-ending cycle of seasons, an ebb and flow of day length.

Science recognizes four significant days of the year in this dance of darkness and light, and these are used to define the start of each of the four seasons. The point at which the sun reaches its highest point north in the sky gives us the longest day of the year. It happens June 20 and is called the Summer Solstice. Its opposite, the Winter Solstice, occurs six months later, on December 20 . . . the longest night of the year.

In between these extremes are the two Equinoxes, when the hours of daylight and darkness are very nearly equal. The Autumnal Equinox foretells the beginning of fall on September 20, and it’s the Vernal Equinox on March 20 that brings the promise of spring.
If you’ve looked carefully around sunrise and sunset of late, you may have already noticed that the days are getting longer. As we pass March 20th, light will win over the night, giving us increasingly longer days.

Nature notices this too. The changing day length is the cue that plants and animals use to know that it is time to bloom, to sprout, to awaken from hibernation, to begin a new cycle of life. Ancient humans also observed this, even building structures aligned to the sun’s changing yet predictable positions. One of these constructions is close to home—a structure called Woodhenge at Cahokia Mounds Historic Site in Illinois. A thousand years ago the Mississippian peoples built a great city of mounds there and Woodhenge was their living seasonal clock. Its circle of wooden posts created precise alignments with the sunrise on each of these four special days. If you venture out the morning of March 20th you may see a sunrise that looks like any other. You’ll know it’s a special one though. It means daylight is winning another round in an eternal cycle of the seasons. 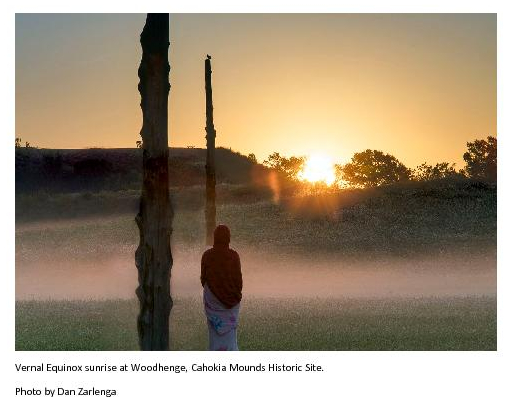