Many of us live with cats in our homes, and the furry felines can make excellent human companions. But did you know there are native wild cats that live in the woods of Missouri? You might not be aware of them because these cats are quiet and secretive.
The critters have a friendly-enough name—bobcats. However, that name has nothing to do with its same-sounding human counterpart. It refers to their unusually short tails, only four to six inches long. They look like they’ve been “bobbed.” Slender and athletic, bobcats have the unmistakable appearance and stealthy gait of a feline.

These cats are somewhat bigger than your home-bound felines, growing to 40 pounds. Bobcats often have prominent ear tufts and an odd ruff of fur that flares around the cheeks and neck. Their coats are tawny-brown and decorated with dark spots that help them blend into their forest environment. Bobcats live in deep forest cover and like the occasional open glade or rock outcropping. They can be found throughout Missouri.

Bobcats will eat small mammals, including shrews, mice, squirrels, and possums. Birds like wild turkey and quail sometimes make their menu. Occasionally a bobcat might even chase down an animal as large as a dear. But their favorite meal is a rabbit, which makes up as much as 70% of their total diet. The forest felines are often nocturnal and do much of their hunting at night.

The wild bobcat hunts much like your housecat does. It crouches down and creeps forward. Its walk is nearly silent, catching unsuspecting prey completely off guard. When the time is right, the bobcat leaps forward in a flash and pulls a victim to its doom with piercing claws.

The rabbit does get its revenge, however—at least in legend. The Shawnee Native Americans tell a colorful tale to explain how the bobcat got its spots. According to the story, it was because the rabbit managed to outwit his predator.

It began when the bobcat trapped a particularly smart rabbit up a tree. The rabbit convinced the bobcat to build a fire, perhaps to cook his anticipated meal. Once the fire was going, it scattered embers onto the bobcat’s fur, burning in the dark spots. This trick presumably provided a distraction that gave the rabbit his chance to getaway. And so, the bobcat wears the spots of its folly to this day.

Bobcat kittens are born during the month of June, spots and all. Mothers wean the kittens after two months, but the young ones still live with them until fall or later. Bobcats are not a social bunch, and they have virtually no interaction with other bobcats. They
communicate by marking their territories with urine and feces. That probably says all they want to say to each other.

So, if you happen to come upon a bobcat in the forest, don’t take it personally if the cat chooses to keep to itself. And by no means attempt to talk it into building a fire. It’s been there; done that already, and it even has the spots to prove it! 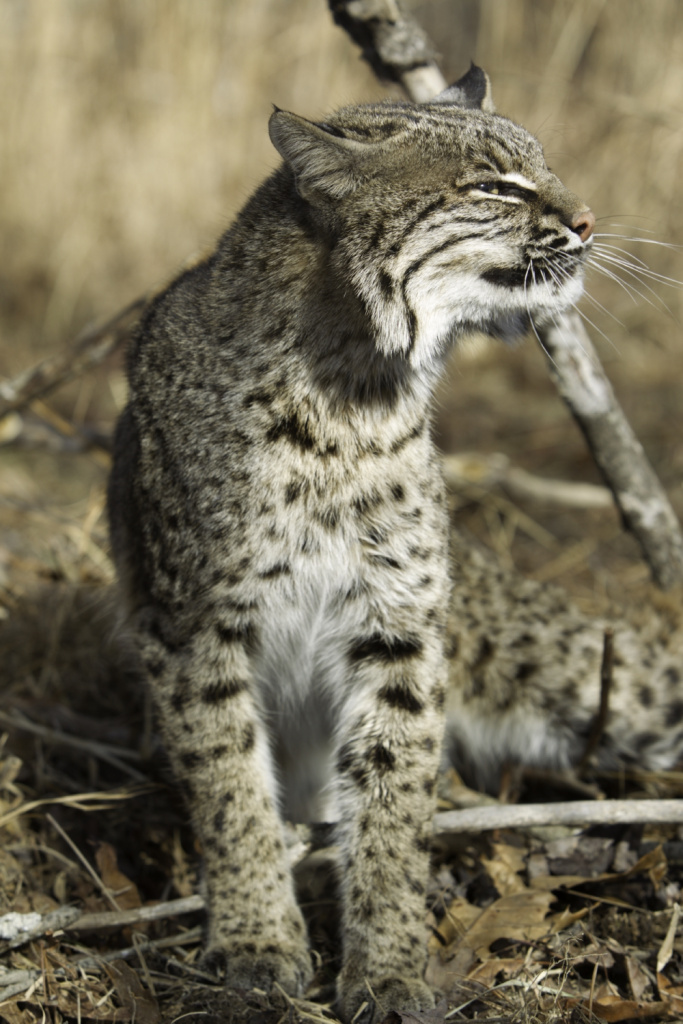