On Tuesday morning, May 24, 2022, the Wentzville American Legion Post 323 dedicated a 12’ x 18’ foot mural honoring all who served in the Vietnam War effort. This dedication coincided with the annual Vietnam Veterans Motorcycle Run for the Wall in Washington D.C. Over 500 riders arrived in Wentzville Monday evening and attended the morning dedication before beginning the next leg of their journey. Colonel Brett Hanke led the devotion and noted that the mural is dedicated to everyone that served regardless of status or location. This includes all five branches of the Armed Forces, American Red Cross, The Salvation Army, civilians; everyone. Over 9 million military personnel served active duty during the official Vietnam War era from August 5, 1964, to May 7, 1975. The mural is located near the Nation’s First Vietnam Veterans Memorial at 201 W. Pearce Blvd., Wentzville. Ehll’s Western Auto generously donated the west-facing side of the exterior of the building for the mural to hang and it faces the Vietnam War Memorial.

Col. Hanke explained that a few years ago, the Wentzville Art Council and the Wentzville Community Historical Society put together an initiative for a Downtown Wentzville beautification project that included murals throughout the downtown district. Paul Deschamp, a local resident, was asked to come up with an idea for the mural. The challenge was to develop a distinctive display different from all the other memorials. Paul served in the 1st Cavalry Division (Air Mobile.) No war had used the helicopter and airmobile operations as extensively as the Vietnam War.

Consequently, one of the iconic images of the Vietnam War is that of a soldier guiding a Huey Helicopter into a landing zone. That is the image that Paul had decided would become the mural. What makes this mural unique is that it has lighting that mimics that of the helicopter cockpit and illuminates the faces of the pilots at night. The mural is the ideal Vietnam War scene depiction to attest to the honor due to those who served in the war effort. Col. Hanke thanked everyone involved in making this effort a reality a few years in the making. 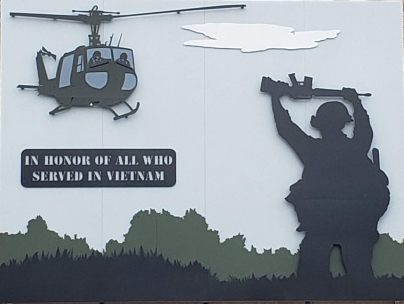