Ghost Pines of Christmases Past

Ghost Pines of Christmases Past

Decorated evergreen trees in homes, offices, and stores are among the most conspicuous harbingers of the Christmas season. Favorites include spruces from Colorado, Douglas firs of the Northwest, or even Scotch pine trees. But haunting the southern Ozarks are Missouri’s own evergreen echoes from a bygone era. It seems only fitting this time of year that we visit the ghost pines of Christmases past . . . the shortleaf. 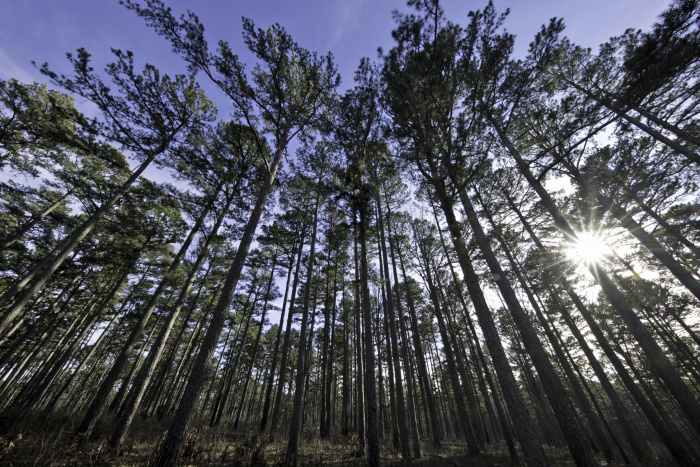 Shortleaf pines are the Show-Me-State’s only true native pine trees. The shortleaf, 100-150 years ago, reigned supreme in Missouri’s southern Ozarks. Shortleaf pine woodlands once dominated the region, thriving in the thin and often dry Ozark soils. Their long stately trunks, covered in thick, irregular, scaly bark, reached the heavens by the thousands. Mostly trunk with a very high crown of needle-laden branches, these coniferous giants towered 120 feet into the air. This was the northernmost reach of the great pine forests of the south.

The shortleaf ruled over 6.6 million acres of Ozark forest for thousands of years before European settlers arrived. How many snow-covered Christmases might they have seen? However, those magnificently long trunks are what ultimately brought the shortleaf’s dominance to an end.

By the mid-1800s, lumber companies saw the potential of the long and straight shortleaf pines to create lumber, fence posts, utility poles, and most importantly . . . railroad ties. As the growing United States expanded westward on steam locomotives in the late 1800’s, ties hewn from Missouri’s shortleaf pines laid the tracks that made that expansion possible. They fueled the growth of the railroads and of our nation's economy. It’s been said that Missouri pines paved the way west for a generation of Americans.

From 1880 to 1920, great mills were established in towns like Grandin, Winona, and Birch Tree to cut and process shortleaf pines. Grandin Mill in Carter County, once the largest sawmill in Missouri and possibly the entire U.S., devoured 70 acres of forest per day.

In just 40 years of unrestrained logging, the great kingdom of the shortleaf pine was toppled, leaving only a ghostly memory of what it once was. In the absence of the great pines, oaks and hickories began to take over, changing the character of the land forever.

Echoes of these pines from the past still exist in the Missouri Ozarks; it’s estimated that 552,000 acres of shortleaf remain. The Missouri Department of Conservation, the U.S. Forest Service, and other entities are working to restore shortleaf pine woodlands to the Ozarks. Shortleaf forests also support a unique suite of other plants and animals, which are likewise starting to make a comeback.

The hope is that new generations can know the great pines, not as haunts of a bygone era, but rather as inhabitants of the future and appreciate them as a continued part of our state’s natural history.

As we enjoy our festive holiday trees this yuletide season, it’s a good time to reflect on the heritage and significance of our state’s native pine trees. Thanks to restoration efforts, the splendid shortleaf pines of our past will continue to grace Missouri Christmases yet to come.
Prev Next
Category: News / Community Interest