Tell It Like It Was - More Doris Fuhr Hopen

Tell It Like It Was - More Doris Fuhr Hopen

Doris: My husband was Wilbert. (https://www.findagrave.com/memorial/49738420/wilbert-b-hopen)

Paul: Oh…did he have a nickname?

P: Somehow, I thought he was called Bud.

P: But I don’t think I knew Norbert.

D: He lived on Schell Road.

P: Oh…there’s still a mailbox up there that says Hopen on it.

D: That’s right. That’s where the guy’s got the place all junked up.

P: Yeah, you could say that. So, you and Wilbert married in 1963…how did you meet Wilbert?

D: Oh, I don’t know…that was years and years ago…a skating party? I knew him for a long time because he drove a truck for Herbie Struckhoff. That was a stock truck-slash-freight truck. He’d take stock down in the morning with it (to STL), have it all washed up and cleaned up, and haul freight back.

P: What Struckhoff was that?

D: Herbert…and they lived next to the church out there, Immaculate Conception, where…I don’t know which Struckhoff lives there right now. It’s a younger couple that lives there…it’s a Struckhoff.

P: Yeah, one of Aloys’ kids. But that house is gone, I suppose.

D: No, that’s the one the oldest boy lives in.

P: Well, did they remodel it so much that you can’t even tell it’s an old house?

D: Oh yeah. They remodeled it; they put those big windows and things in there.

P: Was he pretty good at keeping order among the children on the bus?

D: Well, he made them listen…until…the Defiance kids were mean…and they took him off that route and put him on the Campbelltown route for a while…I don’t know…he never did go back to Defiance route. His brother, Bud, he drove too. That’s how they retired.

P: When you were young, did you go to dances?

D: Nooo, we stayed at home.

P: How about your first telephone?

D: Yeah, it was an old crank-phone.

P: Did you have a wood stove or some other fuel stove?

D: We had wood stoves, and no electricity.

P: No doubt you had an outhouse too, then. Did you sleep upstairs in the farmhouse like kids often did?

P: You mentioned your dad had mules. Did he also have work horses?

P: Any horses for a wagon?

D: No, mules for the wagon.

P: When’s the first time you ever saw a movie?

P: Right. But I guess there was a lot of dancing going on, because Aloys (Struckhoff) is your age, and he talked a lot about going to dances…but I guess everybody’s different.

D: Well…I imagine he associated more with the Dutzow bunch…which I didn’t do. I didn’t have no way to get there.

P: Okay, in one of our earlier interviews you said something interesting to me…that the Catholics did not talk to the Lutherans and the Lutherans didn’t…

D: That’s right. Ooooh no. We didn’t have nothing to do with one another.

P: And was that true of the UCC folks…I mean E&R (Evangelical and Reformed)?

D: I think the Protestants were all like that…Protestants and the Catholics didn’t associate.

P: Did you associate with the E&R?

D: Well, yeah…we associated. But really there was no place to go for us to get together. We just stayed home.

P: So, you wouldn’t bump into each other…

P: Well, what was going on? You had businesses in town where you could bump into people.

D: Yeah, we had the stores…and the blacksmith shop…the feed store. That’s about it. The feed store…Dad would take care of that.

P: …there was stuff going on at Harmonie Verein…sometimes.

P: You know, your brother, Mel, got very interested…in the baseball thing…he made that happen down there…

D: Yes, I run on to the paper…clipping I saved…that…when they dedicated the ball diamond.

P: Did you have much interest yourself in baseball?

D: No…we played maybe 2 games a year…between us, the Lutherans, and the public-school kids. Mr. Hueffmeier had the uptown tavern…right across from the antique store.

D: We would walk from the Lutheran school to…well, right across the street here from me on the public square when it didn’t have the trees all grown on it…and there was a ball diamond on there…and that’s where we played our ball…and that’s where a lot of baseball games were played. And he (Hueffmeier) would come out and say…okay, if you win, you got 2 cases of soda coming. We always beat the public school and…next day at 2:30 he’d come with his 2 cases of cold soda. We got our treat!

P: Can you tell me the names of your classmates?

D: They’re all deceased…Norman Berg, Carolyn (Diederich) Kemner, Velma Nadler, and myself. That was my class.

P: But since it was a one-room school, you knew everybody, I suppose.

D: Yes…eight grades were in one room. I can remember a whole bunch of them, but they’re all deceased.

P: They still have names.

D: Well, here in town…I can’t really recall. They more or less came from Matson, Defiance…Matson mostly. And from around here…the Nadlers. There was Virginia (here’s a link to a 2019 interview of Virginia Nadler -  https://www.youtube.com/watch?v=UX66Von6hTY), Leonard. And then there was Wissmanns from Matson. Well…the Sollmanns…where Paul (Doris’ son) has his (Hoffmann’s) vineyard on Nahm Road.

P: Okay, let’s talk about your children. You have 3. Is Paul the oldest?

D: Paul’s the oldest, then Lori, and then David.

P: So, Paul is the overall vineyard manager for Hoffmann.

D: Well, I think he has a boss, but I don’t know how much he knows about growing and harvesting grapes.

P: How many kids do Paul and Donna (Heggemann) have?

P: And what does Lori (Becszlko) do? And how many kids does she have?

D: She works for Canam Steel, way on the west end of Washington. She’s got 2 boys and a girl. (Joe is her husband.)

P: And Dave lives at home with you.

P: Well, thank you, Doris, that’s all for now. I guess it’s good that you don’t tell me everything, because it’s always fun to call you and ask questions about different topics.

P: Even if your answers are wrong, I like how they sound.

D: Nobody else knows it but me and you!

Gentle readers, after Doris Part One reached your various devices, a reader told me that he had no idea that Mel Fuhr and Doris were brother and sister. And I, of course, realize that some of my readers don’t even know who Mel Fuhr is.

Well…let me just say this…there’s no one in Augusta today that fulfills all the roles Mel played in town life from roughly 1950 to 2000. He owned two vital businesses: the grocery store and propane sales. He was married (to Ruth Fuhr) with 4 children if my count is right. He promoted sports in town and was largely responsible for the ball diamond which was heavily used for many years. He served on the town board too. These are just the things I could see as a newcomer/outsider that only arrived in the mid-1970s.  I’m sure I’ve missed a few. As his daughter, Cheryl Fuhr Wehmeier puts it, “he lived and breathed for this town and that ball diamond.”

In his old age, Mel maintained his interest in Augusta. Any day of the week you could see him cruising around town on his riding mower, keeping an eye on things. One day, ye olde town painter was working on Jackson St., when Mel stopped his mower to encourage me to run for town board. Basically, what he said was that I was a regular, down-to-earth guy; the board needed more people like me. Well…he was kinda right…I never regarded Augusta as a bedroom community…I did all my grocery shopping at Fuhr’s, then later at Frank’s General Store…I made my living here…I ate and drank at the Whitehouse, the Bread Shed, the Willow Bridge, Ivy Dene, the Cookie Jar, Kathy’s Bakery, Farmers’ Hotel…and above all, I didn’t come here to “improve” or change Augusta. But a regular guy? Regular guys don’t go writing about the inhabitants of small Missouri towns.

So, I’m wrapping up this story before I put any more of my foot in my mouth, but sometime soon, I hope to interview Cheryl Fuhr Wehmeier regarding her research on Fuhr genealogy. And I’ll have more to write about Melvin Fuhr too because…well, as Cheryl says, “Dad did so many things for Augusta, it is a book in itself.”

Courtesy of Cheryl, I am including a photo of (your left to right) Frances Almeling, Laurie Osthoff, Mel, and Mops Fuhr (all deceased) as they celebrate a special occasion after work. Another photo shows Mel in military uniform, while another is Cheryl’s grandpa, Paul Fuhr.

Ach! Just when I thought I was finished, I realized a few of my readers would appreciate a tie-in between Frances Almeling and the Fuhr store. Hold on…there’s a family tie-in with Laurie Osthoff too. And Mops (Marvin)? He was first cousin to Meps (Mel).

About Frances…Find a Grave to the rescue: https://www.findagrave.com/memorial/57838053/frances-s-almeling. After checking with the site, I realized I had heard a lot of that info before. Frances was a sister to Freddie and Reinhold Knoernschild, 2 brothers, who together owned the Walnut St. grocery. At some point Reinhold withdrew from the partnership and bought the Matson store, according to Edith Knoernschild Morgan – see my Edith story - https://www.augustamomuseum.com/post/tell-it-like-it-was-edith-knoernschild-matson-store Freddie sold the Augusta store to Mel…but wait…there’s more! Frances’ mother was Anna Fuhr who was a sister to Paul Fuhr, in other words, an aunt to Mel Fuhr and Doris Hopen. As Mel Fuhr was fond of asking me, “you know what I mean?”

Now, how does Laurie Osthoff fit in? Well, her mother, Shirley Nolting Osthoff, is a sister to Ruth Nolting Fuhr, wife of Mel. Ruth still lives in Augusta, as do her daughters, Jane, and Cheryl. If this is confusing, I apologize…I didn’t mean to rewrite the Book of Genesis. Btw, Laurie’s sister, Carol, would often work at the store too, and she was one pretty gal.

I better stop. Be peaceful, but stay curious. 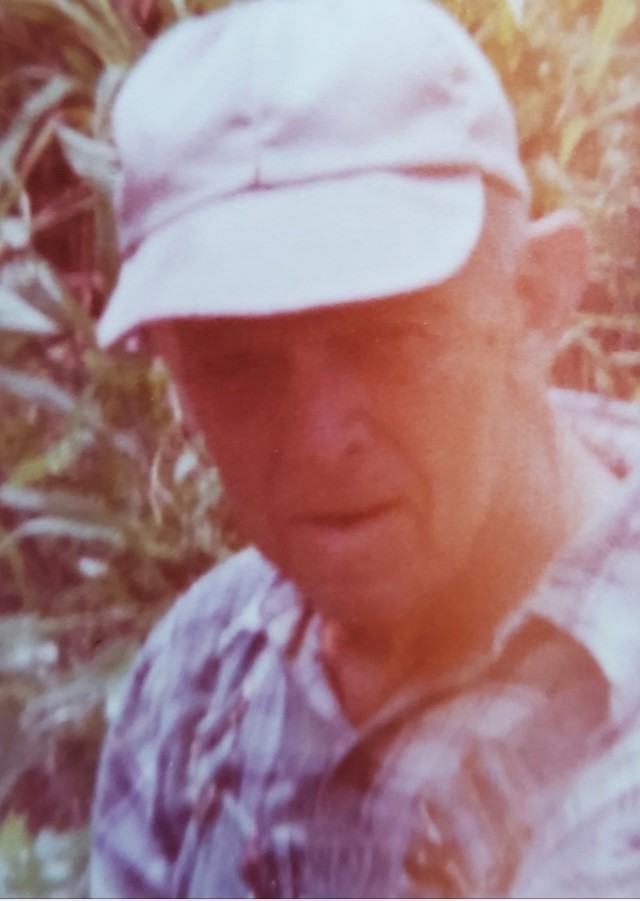 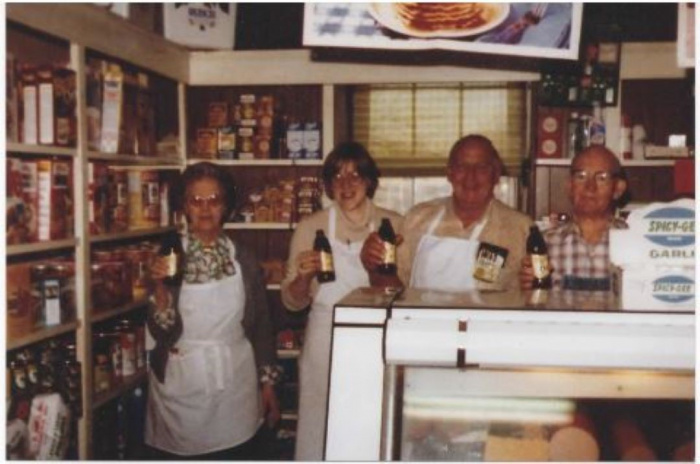 Courtesy of Cheryl, I am including a photo of (left to right) Frances Almeling,
Laurie Osthoff, Mel, and Mops Fuhr (all deceased) as they celebrate a special
occasion after work. 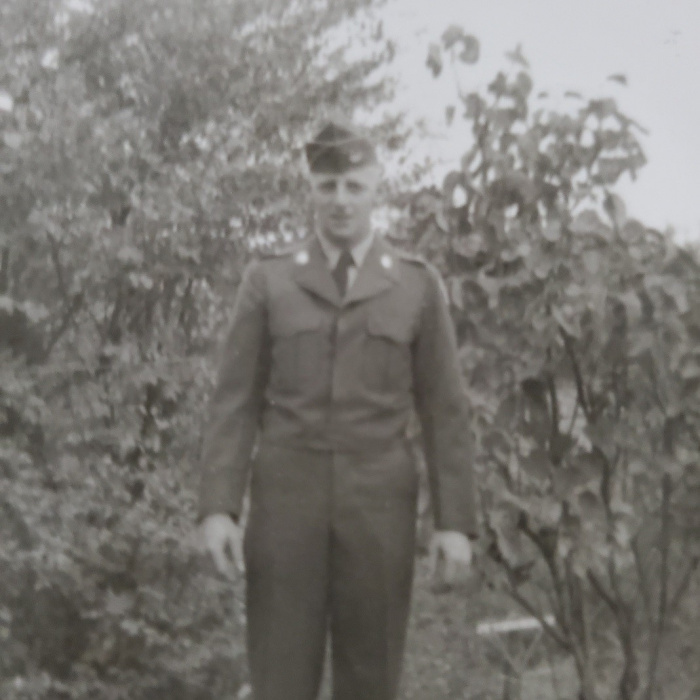 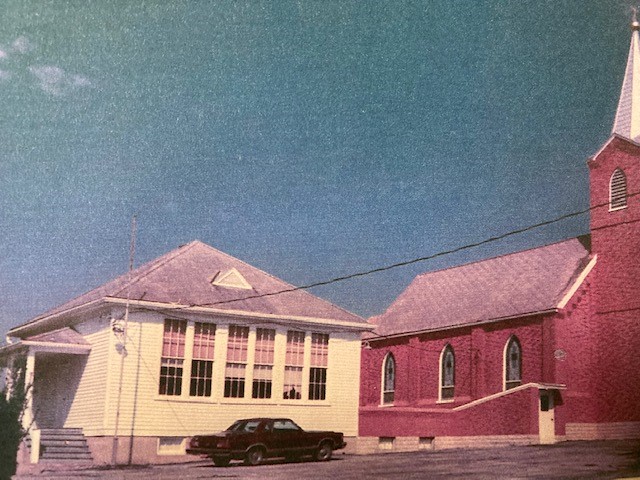