On Jan. 25, 2021 the St. Charles County Council voted on an application to rezone approximately 2.89 acres from A -Agricultural to PR - Park and Recreational District, for the purpose of expanding an existing, adjoining campground, Beyond the Trail RV Park, LLC, in Defiance.

The property is located just across the Katy Trail from Good News Brewing in Defiance, and is owned by County Councilman Joe Brazil and his wife, Kelly. Brazil wants to use the rezoned property to expand his existing campground, adding about 20 additional recreational vehicles. The Missouri Department of Natural Resources (DNR) has previously granted approval to cross the Katy Trail to access the applicant’s existing, adjoining campground. Additionally, the expanded campground would also have an access from Darst Bottom Road via a 24-foot wide gravel driveway.

There were a few protests from nearby property owners saying the expansion would increase flooding on property they own/farm, potentially delaying or prohibiting planting. Others spoke in favor of the expansion. In the end, five of seven Council members voted in favor of the rezoning (Brazil disqualified himself, and one Council member was absent.) All issues regarding flood plain development will be address during the site plan and building permit stages, including a plan to remove the vehicles from the property in advance of Missouri River flooding. 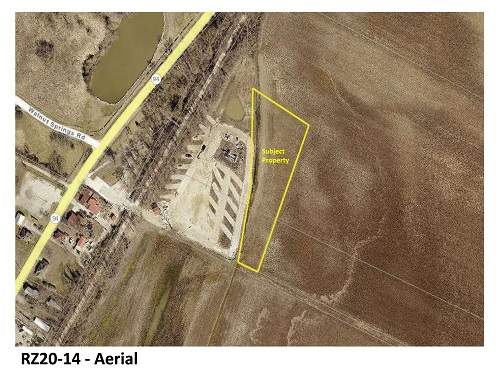