St. Charles County is planning to realign the intersection of Route N and Route Z to a new, four-way signalized intersection east of the current offset/“bowtie” intersection.

The project is being funded by the St. Charles County Government and Federal Congestion Mitigation and Air quality (CMAQ) funds. The goal is to improve traffic flow and safety.

A public meeting/open house, which included maps of the proposed changes, was held October 30 at St. Gianni Catholic Church.

The proposed new intersection will have a through lane, a right turn lane and a left turn lane for each of the four legs. Existing pavement will be used where possible, with pavement widening completed as needed. Route Z will be relocated to the east of the Walgreens store, and will reconnect with the existing Route Z near Buckner Road.

Currently the project is in the preliminary design stage. Easement acquisition / negotiation is expected to begin in 2020, and it is anticipated that construction will occur in 2021.

Representatives from MoDOT who were present at the meeting said it is expected that the future David Hoekel Parkway will incorporate the new intersection into the design of any future improvements to Hwy. N. Plans for this section of the David Hoekel Parkway/Route N improvements have not been finalized or funded at this time. You can view more information online at routenstudy.com. 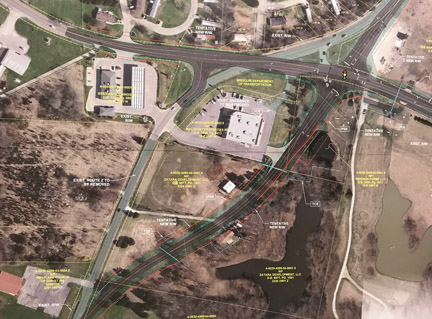